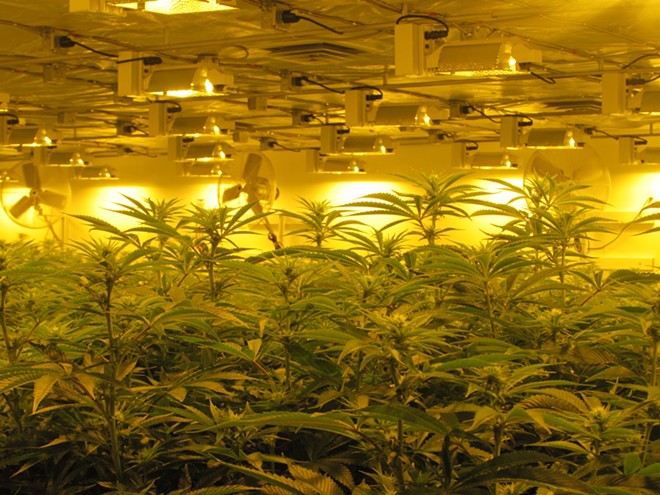 Wilson Criscione
A grow room at Grow Op Farms in Spokane Valley
Before visiting an indoor grow operation and learning the ins and outs of legal cannabis production, like how joints are rolled, members of Spokane Valley City Council first had to meet in council chambers last Thursday. This was, after all, official business.

Tomorrow, the council may adopt a proposed ordinance that would ban new marijuana retailers in Spokane Valley. That would include retail stores, co-ops, marijuana clubs or lounges. Current retailers would be allowed to stay.

This follows a moratorium the council passed in October on any new marijuana facility, including growers and processors. The ordinance to be read Tuesday, however, would not prohibit production or processing facilities. Spokane Valley currently has 21 cannabis producers, 25 processors and three retailers, according to Deputy City Attorney Erik Lamb.

But before voting on the ordinance, the council wanted to educated itself on cannabis production and sales in Spokane Valley. So on Thursday, July 7, councilmembers — all except for Ed Pace — embarked on a tour of a weed farm, Grow Op Farms, and a retailer, Locals Canna House.

We begin in council chambers, where the present councilmembers — Mayor Rod Higgins, Deputy Mayor Arne Woodard, and councilmembers Sam Wood, Caleb Collier and Pam Haley — sit at the dais, looking at a handful of city staff members and me. Woodard is wearing a Hawaiian shirt. As we get ready to head out and visit the farm, Wood chimes in: "Isn't it ironic that a couple years ago, these people would have been in prison?" He will request a mask for the tour.

We all drive to the farm, located inside a warehouse just past a Coca-Cola bottling plant. We cram into a room where we are told to put on a white body suit to prevent any contamination. Wood gets his mask on.

Rob McKinley, the primary owner of Grow Op Farms, leads the tour. He tells us how Grow Op Farms is the largest producer-processor of cannabis by volume in Washington, and one of the largest employers in the Valley. But they can't grow enough of their demand, and the facility is at capacity. It's been unable to expand or move to a new location under the moratorium. If the council passes the city code amendments Tuesday, the Grow Op will be able to move or expand in other facilities. 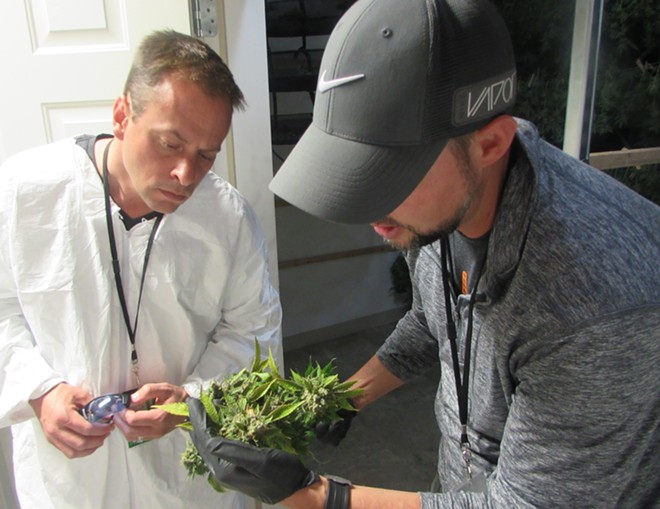 Wilson Criscione
Councilman Caleb Collier gets a crash course in pot production by Grow Op Farms owner Rob McKinley
McKinley then explains how there are male and female cannabis plants, but all the plants here are female.  "And they're very temperamental," says Deputy Mayor Arne Woodard, laughing.

Someone asks how the product is safely transported to retailers on the west side of the state. McKinley says their vans are enclosed with a cage and have round bolt locks on the outside. He says nobody has ever approached one of their vans to rob it.

We go to the mother room. This is the home to all of the different mother plants, or plants that are cloned to grow more plants with the same genetics. The lighting in the mother room is different than in the others — more blue than yellow. Each plant has a tag once it grows six inches tall. They weigh the plants that are killed so that the state knows how much waste the farm creates.

McKinley invites the council to walk around and explore the plants a little bit, but they don't really. Instead the councilmembers mostly hover around each room's door. Wood asks how the farm would control an infestation of mites, and if they use chemicals. No chemicals, says McKinley, only organic solutions. There are good bugs that can eat the bad bugs, for example.

As we walk through the halls, it becomes apparent that this 30,000-square-foot facility is truly at capacity. It's already crowded, and our presence isn't helping. Employees in blue scrubs and pants try to work around us.

Eventually we end up in a processing room, where more than a dozen employees are trimming bud. This is where McKinley shows the council how those pre-made joints are rolled. In short, the weed is gathered, rolled up, then shoved into pre-made joint rollers. They make tens of thousands per week.

Finally, after about 50 minutes going through maybe about a half dozen rooms, all with hundreds of plants in them, the tour ends. McKinley offers Mayor Higgins a pair of protective sunglasses, the kind we were all wearing during the tour, for the mayor to keep. Deputy City Attorney Erik Lamb advises the mayor against it — he's a public official and can't receive gifts. McKinley presents the sunglasses to me. No thanks, I say, journalists can't receive gifts either. The sunglasses will go back in a box, presumably for the next visitor.

We leave the farm and visit a local retail shop, Locals Canna House, where the owner and council gather in the corner and talk business. That lasts about half an hour before everyone drives back to city hall, and the meeting is adjourned.

Higgins says he was impressed with the grow operation and its quality control. He elaborates on the Valley's goals moving forward.

"We don't want to proliferate retailers," Higgins says. "But we do have a lot of empty warehouses, which seem to lend themselves well to grow operations. These will sift themselves out in time, because not everyone operates their business plan like these folks did. And if they don't, they're probably not going to succeed."

Wood points out that a majority of Valley residents voted against legalizing marijuana.  "You represent the people that elected you," he says. "54 percent of the people don't want any of it at all."

Wood says the detailed organization of a facility like Grow Op Farms must have taken a lot of planning. He says he has a strong suspicion that operations like this must have been around before it was legal.

"I got a feeling all this stuff goes on all the time," he says.

Blues news you can use: Mick Fleetwood Blues Band coming to Spokane

Marc Maron showers Spokane with praise on his WTF podcast