Prosecutors: Spokane PD officers justified in use of deadly force after encounter with man near homeless shelter 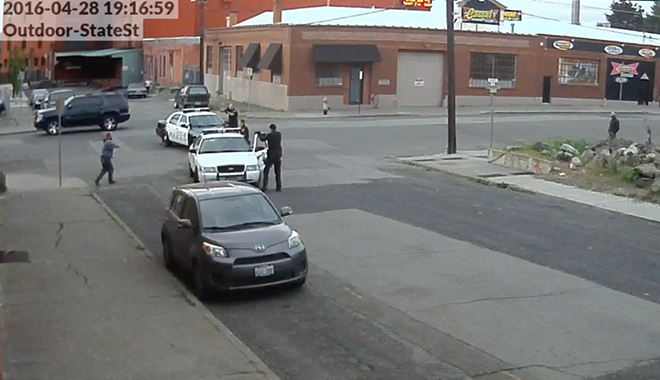 Screen grab of surveillance video seconds before Kurtz was shot.
Spokane police released a trove of body camera video, surveillance footage and reports yesterday, giving the public a look into the tragic shooting earlier this year near the House of Charity homeless shelter.

Three Spokane Police officers initially responded April 28 to a man holding a large knife to his chest, saying he wanted to die. Within less than 90 seconds of officers arriving, Michael Kurtz was shot and would be pronounced dead at the scene.

This police shooting was one of three involving Spokane Police officers in the span of less than a week. The other two men shot by police are still alive. One of those men, Aaron Johnson, survived police gunfire once before in 2014.

Two of the three officers who responded to Kurtz's 911 call, Officer Ryan Atkins and Officer Brandon Lynch, fired a total of three rounds. The third, Officer Chris LeQuire, fired a Taser in an attempt to disable Kurtz as he approached. The use of deadly force has been ruled justified and neither officer will face criminal charges, according to a decision by Spokane County Prosecutor Larry Haskell in June.

"Under these circumstances, the evidence shows that Kurtz confronted officers while holding a large knife and threatened to harm himself and the officers," Haskell wrote in a statement. "He ignored repeated commands to drop the knife, back up and let the officers help him. An attempt to stop Kurtz with a Taser failed and he continued to move within the safe distance for officer safety. Under these circumstances, it was reasonable for the officers to respond with deadly force. Further it is clear that the officers acted without malice or evil intent. Therefore, criminal charges will not be pursued."

Spokane Police are still conducting internal reviews of this incident. All three officers have returned to duty after serving mandatory paid administrative leave.

We've embedded two body camera videos from this shooting at the end of this post, but a caution to our readers: They contain profanity and show graphic images of a man being gunned down. As officers arrived at the West Pacific Avenue and State Street, LeQuire began asking Kurtz to drop the knife and let police help him. "Hey partner, my name's Chris, man. What's going on with you?" LeQuire says.  "I just want to die," Kurtz wails.  "We just want to help you, man," LeQuire says.  "Kill me!" "No we don't want to do that." "Kill me that's how you'll help me!" Kurtz yells. LeQuire and the other two officers continue to talk to Kurtz as he approaches, still holding the eight-inch blade to his chest. He screams repeatedly: "Kill me! kill me!"

LeQuire fires a Taser, but it has no effect on Kurtz. As Kurtz moves beyond the far edge of LeQuire's patrol car, the officer says: "Take it," and three shots ring out — two from Lynch's rifle, one from Atkins' handgun.
During a press conference yesterday, law enforcement officials called attention to multiple aspects of the shooting and aftermath, including officers' attempts to talk to Kurtz and the importance of body camera footage.

"This is a good example of why our body cameras are such a good tool," says Tracie Meidl, captain of investigations, identified here by her first and last name because her husband, Craig Meidl is SPD's acting police chief.

Asked why the officers decided to shoot when they did — as Kurtz rounded the back edge of a patrol car — instead of waiting or trying the Taser again, Tracie Meidl says officers faced a decision to fire or flee.

"The taser had proven ineffective, so what we have here is the distance being closed in by Mr. Kurtz," Meidl said. "And the officers not having the cover of their patrol car and essentially would have been in the position of being chased by Mr. Kurtz."

Officers begin helping Kurtz immediately after he falls to the ground as witnesses to the shooting approach the scene. One man, Arlo Morrow, started yelling at officers as they tended to Kurtz, saying they shot Kurtz "in cold blood." Officers asked him repeatedly to back up, but Marrow continued. Murrow and another woman were eventually arrested.

"This is a very traumatic event, not only for the officers involved but for witnesses,"Wohl says. "So emotions get going. We get a lot of wins in that we respond to suicidal calls like this on a regular basis, many times a day. Most of the time we can get them the help that they need, which is what we want."

[Editor's Note: this post has been updated to more accurately reflect Capt. Tracie Meidl's position as captain in charge of investigations.]