Washingtonians search for these Halloween costumes more than other states


In general, Halloween costumes are fun. They can be a reflection of the individual or of recent topics of discussion. Or in the case of one Inlander writer, literally a topic of discussion:

In Washington state, apparently Halloween costumes are a little food-ish, slightly bumbling and quite frankly, really nerdy, according to 11 years worth of Google trends data.

Real estate site Estately compiled the data and listed all the costumes searched by each of the 50 states more than any other states.

Now, we love Google search data as much as the next person. And we love maps, like this one that Estately produced to accompany its "data analysis:" 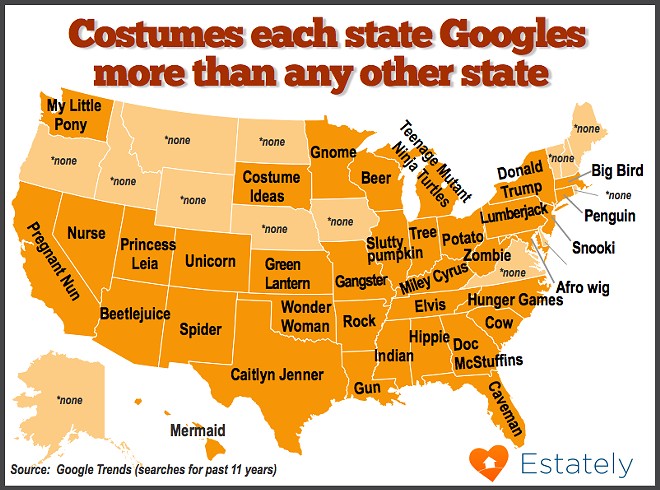 But, we should also mention that there are some flaws with Estately's methods, which amounts to a "throw a bunch of stuff at the wall and hope something sticks" way of doing things, according to this Vox.com explainer.

Basically, Estately enters hundreds of search terms into Google Trends, which then tells users which states have Googled that term the most.

Speaking of Halloween , For Fun!

Halloween's horror slasher has cheated death countless times, whether we wanted it or not