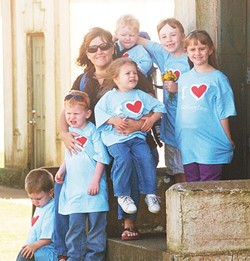 Longtime former foster parent Connie Kerbs and her children
Abused or neglected children in Washington likely won't be guaranteed legal representation any time soon, after a bill that would have automatically appointed them an attorney in dependency proceedings failed to make it out of committee in the state legislature.

When children are removed from their home and placed in the foster care system, dependency proceedings in court will decide where the child stays, what services they receive, and what kind of relationships they will be have with the family.

But many children do not have an attorney to represent their wishes during these proceedings. Washington does not have a state law that automatically appoints counsel for abused or neglected children, and a majority of counties have no such requirement, either. In Spokane, attorneys are automatically appointed for children 12 and older, but the majority of dependency cases in Spokane are for younger children. (The Inlander wrote about this issue in this week's paper).


Substitute House Bill 1251 would have changed the law in Washington state to guarantee legal representation for all abused and neglected children over the age of 2. But after a public hearing on Friday, no action was taken in the House Committee, meaning the bill is likely dead this year, though it's possible it could be revived later in the session.

Court Appointed Special Advocates already represent the best interests of children in court proceedings, and some have argued that an attorney would be redundant and would perhaps complicate these proceedings unnecessarily. Attorneys have countered that the best interest of a child, as determined by a CASA, is different than the child's wishes, and both are necessary to ensure the best placement of a child. CASAs also are not lawyers and cannot file motions in court.

Guaranteeing an attorney to all children in dependency proceedings would have required hiring more attorneys, and the cost of that could be high. In Spokane County, it would likely require more than a dozen new attorneys.