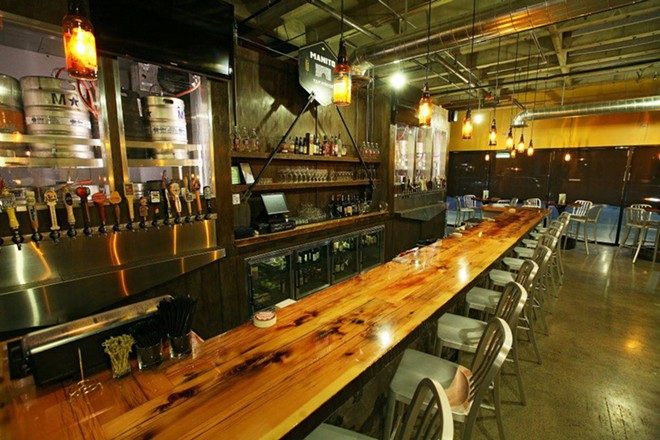 Courtesy Manito Tap House
Manito Tap House offers more than a hundred beers on tap and in bottles and cans.
Craft beer has been booming in the Inland Northwest for the past five or so years, and this latest accolade proves that our fair Lilac City continues to make its mark on the national movement.

Owner Patrick McPherson found out about the honor in late January, and says he was surprised by the news because he and his staff didn't actively encourage locals to nominate the pub for the reader-based award. (They last publicized their role in the competition a few years back, and then the bar made it to a second round of voting, he adds.)

"We're pretty stoked," McPherson says. "It goes to show that Spokane is catching up, and I think it says a lot for the local scene of beer and restaurants."

Opening in 2011, Manito Tap House has since established itself as a destination for local craft beer lovers, offering 50 tap handles and an extensive list of bottles and cans stored in its beer cellar. The Tap House is also known for employing staff who've become certified Cicerones after passing an extensive, four-hour test covering the wide world of beer service and knowledge. And, it's a Four-Star Certified Green Restaurant for its environmentally-conscious practices.

CraftBeer.com is the online publication of the national nonprofit trade group the Brewers Association, and offers a wide range of resources for beer brewers and connoisseurs of all levels.

To choose the 50 best beer bars, one for each state in the U.S., CraftBeer.com readers are asked each year to nominate locations in their state, filling out a survey that asks about a bar's atmosphere, staff, beer selection and special events. More than 7,000 votes were cast late last year for the site's 2017 awards.

Tonight is also the sixth of 10 nights for Inlander Restaurant Week — of which Manito Tap House is a participant — so the gastropub is bound to be quite busy.

"It'll probably be standing room only, but it should be a fun night," McPherson says. "I think it's huge for Spokane any time we win an award, whether it's a restaurant winning a James Beard Award, or the best beer bar."