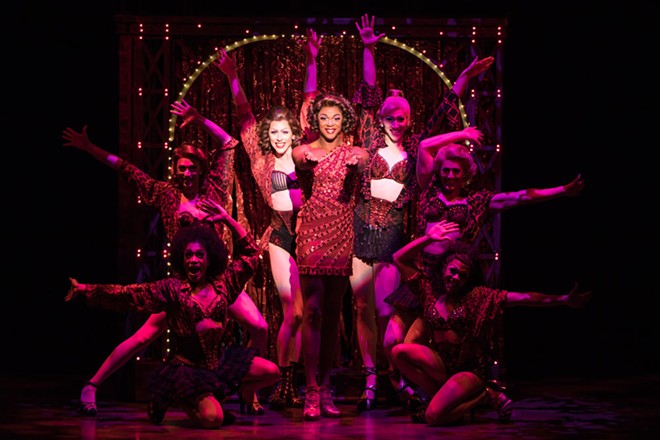 Lola has become a Broadway icon since first hitting the stage in 2013.
The answer to your question is, “Yes, that really is a dude!”

In a country suddenly fighting over who gets to use the restroom, drag queens and straight-laced working folks mingled just fine up on the INB stage Tuesday night for Kinky Boots’ opening night in Spokane.

This 2013 Tony-winner is definitely a case of “How’d they make a show out of that?” Based on a single episode of the BBC series Trouble at the Top (which was later turned into the 2005 Chiwetel Ejiofor-starring film), Kinky Boots follows the fate of a soon-to-be-defunct English shoe factory. When the buttoned-down owner teams with a London drag queen and begins manufacturing fetish footwear, well, that’s how Broadway magic is made … apparently.

It helped, of course, that Harvey Fierstein (Hairspray, La Cage aux Folles) wrote the book and that Cyndi Lauper (who, as we know, just wants to have fun) handled the music — a nice mix of pop, ballads and the usual Broadway move-the-story-along songs. But it’s Lola who makes the whole thing take flight — a role that seems scientifically crafted to win a Tony. And, in fact, Billy Porter did win the Tony with the original cast. It’s a barnburner of a part, with plenty of drag bombast, sprinkled with human moments — and even boxing.

Once they calculated his gender, Timothy Ware’s Lola had the Spokane audience rapt — especially with scene after scene of high-energy choreography. Ware rolled right through like a boss, leading his, um, unique dance troupe with panache.

For audience members anywhere in America not sure what Kinky Boots is all about, and who may be a little uncomfortable about the whole drag thing to begin with, there’s a character just for you — Don, the shoemaker (played by scene-stealer Sam Zeller). Let’s just say Don’s on a journey, too, and while it’s a hilarious story arc, we can all learn from Don.

The final scene is all you can ask for in musical theater. After watching most of the show inside the drab factory walls, the crew’s fashion foray to Milan explodes in color, sound and, yes, more dancing, where those improbable boots do most of the talking. When all was said and done, this Spokane audience was on their feet and that whole bathroom debate seemed even sillier.

EDITOR'S NOTE: The original version of this review had the wrong actor listed in the  role of Don. Sam Zeller, the understudy who's been on the road with Kinky Boots for more than two years, performed in the role the night this production was reviewed.

Washington HRC reiterates: Transgender students are still able to use bathroom of choice

What We've Been... Playing