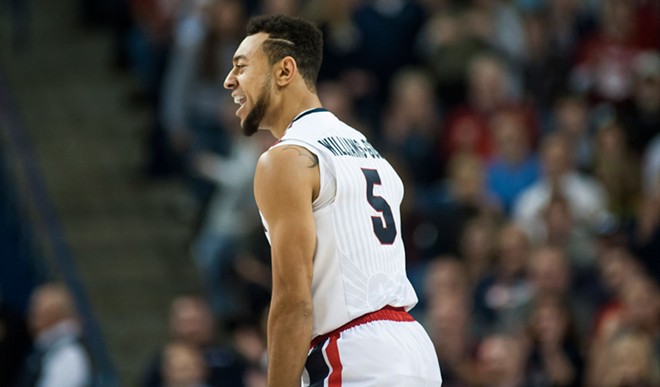 Nigel Williams-Goss was one of the three Gonzaga transfers who came up big in their first WCC tournament game. The Zags take on Santa Clara Monday night in the semi-finals.
It’s March, but there’s yet to be any madness at the WCC Tournament in Las Vegas. Over the weekend the top four seeds advanced into the semifinal round.

“It was a real March grinder there at the start,” Head Coach Mark Few said after the game.

The Zags, coming off their first loss of the season, did not inspire confidence early in their quarterfinal against the Tigers. Gonzaga made just nine shots in the first half, and only one three-pointer.

Gonzaga hasn’t lost a WCC Tournament opener since 1997. Saturday, three players making their tournament debuts pushed that streak to 20 years. The Zags’ lauded trio of transfers outscored the Tigers on their own, accounting for 53 total points.

Jordan Mathews led the way with a season high 22, 20 of which came in the second half.

This will actually be just the 10th, and the previous nine have all been Gonzaga victories, but Brownridge’s Broncos have put some good scares into the Zags. The senior guard has nearly upset Gonzaga on three occasions, coming up two points short each time.

These teams last met in Vegas back in 2014, when Brownridge was just a freshman. The final two of his 24 points in that game came on an elbow jumper which tied the game with 9.1 seconds left. David Stockton answered with a layup, and the Zags survived 77-75.

Brownridge now gets one final shot at that upset, and he’ll need to come up big once again if he wants to pull it off.

Santa Clara’s second leading scorer, KJ Feagin (14.6 ppg), did not play in the quarterfinal round due to a concussion. Head coach Herb Sendek was unsure whether he would have Feagin back against Gonzaga. Without Feagin, the Zags’ odds of advancing increase, but so too do the odds of Brownridge pouring in a ton of points.

Gonzaga takes on Santa Clara at 6 p.m. Monday on ESPN.

CONCERT REVIEW: Elton John dazzles the Arena with a collection of pop classics