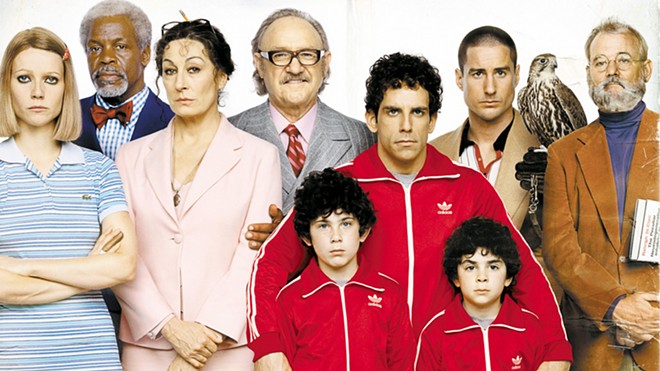 The Royal Tenenbaums
Last week, New York Times film critics A.O. Scott and Manohla Dargis embarked upon a fool's errand and ranked the 25 best films of the century so far. These kinds of lists always engender debate, and you probably saw someone share it on Facebook, no doubt grousing about titles that were omitted (look at the comments on the Times' original post for some of that).

But what Scott and Dargis did select was, as their writing so often is, illuminating and surprising. Their pick for No. 1: Paul Thomas Anderson's There Will Be Blood. No complaints there. Also in the mix: Popular Hollywood fare (Inside Out, Mad Max: Fury Road, The 40-Year-Old Virgin), major works from prestigious American filmmakers (Clint Eastwood's Million Dollar Baby, Steven Spielberg's Munich) and a number of more obscure foreign films — China's A Touch of Sin, Romania's The Death of Mr. Lazarescu, Mexico's Silent Light.

I love exercises like this, not only because they point you in the direction of lesser-known work, but because they inspire you to mentally form your own list. Which is exactly what I did, and narrowing it down to a more digestible 10 titles was something of a feat. Here are my choices, about which you'll no doubt disagree.

Zodiac
10. Zodiac (2007)
An unshakeable sense of dread pervades every meticulous frame of David Fincher's Zodiac, which is easily one of the scariest movies of the last few decades. On its surface, it's a true crime thriller about an elusive serial killer running roughshod over 1970s San Francisco, but it's also about the elusive nature of the truth and the dangers of obsession.

9. Talk to Her (2002)
This is Spanish auteur Pedro Almodovar's masterpiece, a full-blown melodrama centered on a pair of comatose women (one's a bullfighter, the other a ballerina) and the relationship that develops between the two men who care for them. Almodovar, one of the world's greatest living filmmakers, has always trafficked in the stuff of soap operas, but his virtuosic command of style — from the music to the bold colors to the out-of-nowhere silent film interlude — is completely rapturous.

8. Pan's Labyrinth (2006)
Part fairy tale, part brutal war film, this macabre fantasy from Mexico remains the strongest statement, both visually and narratively, by visionary director Guillermo del Toro. His sense of beauty has always had a gruesome edge to it (no one excels at marrying gorgeous production design with horrifying special effects quite like he does), and that's never been more apparent than in Pan's Labyrinth, which has the uncanny ability to repulse, fascinate and enchant all at once. 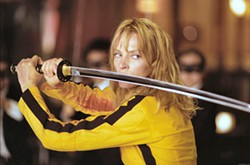 Kill Bill: Vol. 1
7. Kill Bill (2003-04)
There are a number of more highbrow titles I could've picked, but who am I kidding? I can't deny how much I love (and how many times I've seen) Quentin Tarantino's frenetic ode to all of his grindhouse influences, a blood-soaked tale of revenge conceived as a four-hour opus and released in two distinct volumes. It's action filmmaking at its purest.

6. Children of Men (2006)
Before he won an Oscar for the special effects extravaganza Gravity, Alfonso Cuaron directed this dystopian drama about a future where humans have become mysteriously infertile. The sheer technique on display is unbelievable, with a number of high-wire set pieces — the opening explosion in a coffee shop; the ambush on the highway, with its swirling, physics-defying camera; the bloody battle that stops dead at the sound of a baby crying — but it's also, unlike so many futuristic stories, strangely hopeful in the face of cataclysm.

5. Boyhood (2014)
Some critics have labeled Boyhood's narrative conceit — director Richard Linklater and his cast shot the film over the course of 12 years — as merely a gimmick, but in this case, the conceit is the story. The film is structured as a coming-of-age drama, but it's really about the passage of time, and to see that play out for real is something that few movies have ever attempted, much less achieved. And despite its title, the movie's richest material comes from the parents, played by Ethan Hawke and Patricia Arquette, who develop into some of the most believable people I've ever seen on screen.

Her
4. Her (2013)
Another vision of the future, this one far more comedic and wide-eyed than Children of Men, and yet no less melancholy. Spike Jonze's Oscar-winning screenplay is a perceptive, touching examination of love in an age where we relate to one another through technology, yet it's neither heavy-handed nor moralistic.

3. Moonlight (2016)
It's rare to see a movie that announces its greatness as immediately and confidently as Moonlight does. This year's Best Picture winner is one of the most deeply empathetic human stories to come around in a long time, following a queer, black kid discovering what it means to be a man in a culture that's sending him wildly mixed messages. Director Barry Jenkins and his cinematographer James Laxton pack so much meaning into individual images, and the supporting cast — Naomie Harris, Janelle Monáe, Trevante Rhodes and Oscar winner Mahershala Ali — is stellar.

2. The Royal Tenenbaums (2001)
Wes Anderson's distinct style has become a shorthand for a particular kind of quirkiness, and The Royal Tenenbaums is where he perfected it. I don't think he's topped it, either: This movie is caustically funny, brilliantly acted, beautifully structured and, in the end, moving in a way you don't quite see coming. And how dead-on is Gene Hackman as the pathological patriarch who lends the film its title? Rewatching it with an audience a few years back at an Inlander Suds and Cinema event, I was struck all over again at just how perfect it is.

No Country for Old Men
1. No Country for Old Men (2007)
The Coen brothers' best films tend to operate in two distinct modes simultaneously. Fargo is a snow-blind film noir built atop a folksy rural comedy. Barton Fink is a period piece about artistic frustration that gradually and literally descends into Hell. A Serious Man is a slapstick retelling of the Book of Job. They refuse to be chained to the conventions of standard Hollywood moviemaking.

Similarly, the first hour or so of their No Country for Old Men plays like a dutiful cover version of the Cormac McCarthy potboiler that inspired it. Its second half, however, is a different story altogether. This is a propulsive cat-and-mouse thriller boasting sequences as harrowing as anything Hitchcock ever directed, and yet it's also (somehow) a cerebral meditation on aging and mortality, and those two wildly different threads never connect in the ways you expect. Some viewers hated that. I was, and still am, fascinated by it. A decade later, and I'm still parsing this one out.

And here are 15 more (in alphabetical order) to round out my top 25: Adaptation, Brokeback Mountain, Eternal Sunshine of the Spotless Mind, In the Mood for Love, Inside Llewyn Davis, Lost in Translation, Mad Max: Fury Road, The Master, Minority Report, Mulholland Dr., A Separation, The Social Network, Spirited Away, There Will Be Blood, The Tree of Life.

Investigating the 'wanderlust gene,' a perfect storm for allergies, and the return of Summer Parkways