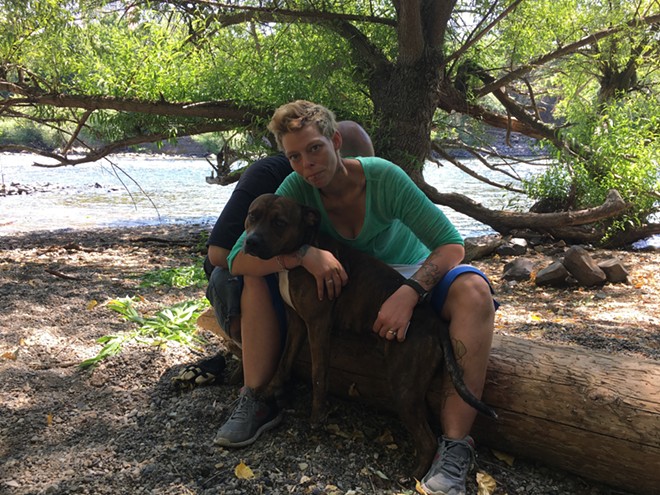 Mitch Ryals photo
Destiny Brown, a homeless woman originally from Pennsylvania, with her dog, Mister: "If they can't see us, then they can't judge us. Maybe they should try and put their feet in our shoes. See how well they would do."


Journalists are supposed to offer one thing to the people they cover — an opportunity to comment, to share their side, to give another perspective. It's only fair, the thinking goes.

But it doesn't always happen.

Local residents were introduced this week to a homeless camp on the banks of the Spokane River.


"It looks like they've kind of made themselves a little Spokane Riviera Country Club," KHQ's Peter Maxwell says at the beginning of a Facebook Live video, later calling the encampment a "full-blown country club for the Spokane homeless."

The video, broadcast on Tuesday, had been viewed almost 60,000 times and shared on social media about 240 times as of Wednesday evening. Some viewers took offense to Maxwell's comments, and KHQ has since removed it, but we saved a copy.


Standing across from the encampment on the south side of the river, Maxwell describes a "concrete wall," a dog and at least three people, one of whom is apparently wearing football pads.

"I don't know why he would be wearing those pads unless he's going to go try out for a team or something like that," Maxwell says mockingly. "Maybe someone's missing a pair of shoulder pads? If you are missing them, they're probably down here."

A later segment that aired on KHQ Tuesday evening described the camp as an eyesore in an otherwise up-and-coming neighborhood. Maxwell tells his viewers that he called Spokane's code enforcement to ask what can be done to "evict these people out from this camp."

What viewers didn't get, however, was the perspective of the people living there, context on how illegal camps can cause issues, or whether this specific camp has caused any problems.

"I'm spending most of my time trying to hide from the police or making sure my shit is concealed so that we don't get chased off."

Destiny Brown says she has been living at the camp for about two months. She says she's been on the waiting list for low-income housing for two years and has nowhere else to go. Before moving with her dog Mister to the banks of the Spokane River, she lived on the streets downtown.

"I'm spending most of my time trying to hide from the police or making sure my shit is concealed so that we don't get chased off," she says. "We're constantly having to move. I don't know what we did to people to piss them off, but we're not all that way. We're not."

Now, Brown and the other six people living by the river are being evicted. On Thursday — two days after the KHQ segment aired and Maxwell called Spokane's code enforcement — a pair of Spokane police officers told the group they have three hours to pack up and leave.

"There are plenty of resources for them to use," Sgt. Richard Carroll tells an Inlander reporter, while his partner speaks to one of the men living at the camp. "If they choose not to use them..."

Carroll says SPD was originally tipped off to the camp by Spokane's code enforcement and not because the police spotted the people living here doing anything illegal (other than living there). He notes that signs are posted telling people it's against the law to camp in this area.

"If you want to get a job and get a piece of property and make your own kingdom, that's your right," Officer Dale Wells tells Walter Vielbig, who said he's a convicted felon. (He's also registered as a sex offender.) "At some you have to take responsibility, but we can't let this become a transient camp."

"I don't have nowhere to go," Vielbig responds. "I'm homeless."

Traci Zeravica, the news director at KHQ, acknowledges that Maxwell's comments were "flip."

"I don't think that was the intention," she says. "We own that, and the reporter owns that."

After the segment aired Tuesday evening, Zeravica says, a woman named "Ellie," who is homeless, contacted the station to express her frustration.

"I'm intrigued by what we have learned in doing this story insofar as the landscape of some of the folks who are homeless," Zeravica says. "We'll probably do a heck of a lot more stories [on homelessness]. Part of our job is to learn and grow and serve the community in different ways. I think we'll continue to evolve."

In a June story, Maxwell says he brought the cops to a possible "bike chop shop" at an encampment near Lewis and Clark High School. For these two stories, Maxwell did attempt to talk to the homeless subjects of his reports.

Zeravica says the police opened an investigation to find out if the bikes were stolen, but is unsure of the outcome.

"Do we always call police or the authorities? No," she says. "But we couldn't call police about that."

When Spokane's code enforcement gets a complaint about a camp, typically the first group to take action is the Homeless Outreach Team, says Melissa Wittstruck, a neighborhood and housing specialist with code enforcement.

"So they can go out first to the location, offer services, let the campers know, 'You can't be here. We’ve got services,'" Wittstruck says. "If necessary, the police department will post and give them 48 hours notice that they have to move, and remove their belongings."

She estimates there are about three or four camps cleared out every day. In places where "no trespassing" signs are posted, folks may be moved along immediately.

When litter and belongings are left behind at camps on city property, crews come in and clean it up. Who does that work on where a camp is, says. Code enforcement has a litter team, as do the parks and streets departments, and the city uses a Geiger Corrections Facility work crew for certain areas.

On a typical day, the Geiger crew, working the Interstate 90 corridor from Maple to Division and some of , picks up between 600 and 1,000 pounds of litter (not all from camps), Wittstruck says.

Brown says that she and the others living in the camp have worked to keep it clear of trash.

"There was more trash when we first got down here than there is now," she says. "When we leave, we always take a bag of trash up with us."

Wittstruck's department doesn't currently track whether they are moving the same people from illegal camps repeatedly, she says, but anecdotally, she has seen the same people moved on more than one occasion.

"There are people that for whatever reason are making a choice to be there," Wittstruck says. also people we work with ... they clean up after themselves and after other people in that situation. Like I said, it's not a crime (to be homeless), and there’s a lot of human dignity and a lot of sometimes sadness associated with this, but that doesn't mean, like any other citizen, they don't care about the community they live in, or the location."

WHAT CAN YOU DO TO HELP?

Rather than just complaining to the city, nonprofit organizations or news organizations, Spokane Homeless Coalition Chair Ryan Oelrich says he asks people to consider what they can do to help in these situations.


"Whenever somebody calls me to complain about finding a homeless camp or seeing someone on the corner that’s panhandling, I always ask, ‘What did you do to help? What can you do to help?’" Oelrich says. "People like the city to take care of all this, or organizations, but it's complicated, and we need everybody to really address and resolve homelessness in Spokane."

Oelrich recognizes the concerns with illegal camps — a few years ago, a fire started by illegal campers came within about 100 feet of his property.

"This is a real issue here. We need to work to get beyond it," he says. "We have organizations that can work with these folks to hopefully get them into housing. They have to be willing to do that."

Sometimes people have good reason to not want to stay in a shelter.

When youths turn 18 and age out of the youth shelter, staying around older adults may not be the best fit for them. Oelrich says one 19-year-old man he knows says that after he was beaten up several times at an adult shelter, he decided he'd rather camp.

Another woman Oelrich encountered was covered head to toe in mosquito bites.

"She said, 'I much prefer the mosquitos and sleeping along the river as opposed to the shelter, where men are always trying to touch me,'" Oelrich says.

He suggests talking to people first before passing judgment.

Also, rather than "drive-by gifting" money or clothing, he always recommends giving to service organizations that have case managers to keep people accountable and assist with moving them out of homelessness.

Brown is from Pennsylvania, Vielbig is from California and Dustin Earwood, the man they call "Country," is from South Carolina. Each one is upfront about the reason they're living here by the river, and not in a home or a shelter.

After Brown's mother died a few years ago, she "freaked out" and started hitchhiking around the country. She landed in and is open about her drug use. She says she's trying to quit.

Earwood says he came to Washington for the legal marijuana. He prefers the outdoors to shelters.

"Only thing these people can say about me if they cross my path is that I'm a respectful man," he says. "I say 'Yes, sir, thank you, please, excuse me.' You don't have to give me the same respect, but you better not disrespect me in arm's reach."

As a felon, Vielbig says it's nearly impossible for him to find steady employment, and being surrounded by large groups of people in shelters gives him severe anxiety.

Brown says she watched KHQ's video on their website after it aired.

After the two police officers gave the group a few hours to leave, Brown begins packing her things into a backpack. Neither nor any of the others living down here, know where they'll go. None of them like living in shelters.

"I just think people need to open their hearts and close their eyes, because we're no different than them," Brown says. "We're trying to make a living like they are, we're just doing it in a different way. And if they can't see us, then they can't judge us.

"Maybe they should try and put their feet in our shoes. See how well they would do."

Strategies to delay dementia, more benefits of fruits and veggies, and checking out Camaros for a good cause