NEWS: A hearing is scheduled today in a Spokane Valley marijuana grow case that could send at least one man to prison for life. 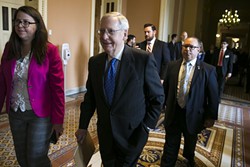 Al Drago/The New York Times
Senate Majority Leader Mitch McConnell
NATION: Senate Republicans are headed toward a vote today on health care, but nobody really knows exactly what they will be debating. (via New York Times)

Justice served
Donna Perry, a transgender woman and convicted serial killer from Spokane, has been sentenced to life in prison without parole for three murders she committed in 1990 as Douglas Perry. (Spokesman-Review)

Wildfire season
The Bissell Fire in Stevens County has grown to 411 acres and is forcing people out of their homes. The fire, which started on Sunday, has forced a level three evacuation for everyone within a one-mile radius of 3987 Bissell Road in Gifford, near the Columbia River. (KXLY)

Rail measure goes to ballot
Spokane City Council voted last night 5-1 to put a proposal on the November ballot that, if passed, would fine coal and oil trains passing through downtown Spokane. (KREM)