Will UberEATS devour its competitors in Spokane?

With its arrival in the city, local food delivery businesses gear up for new competition 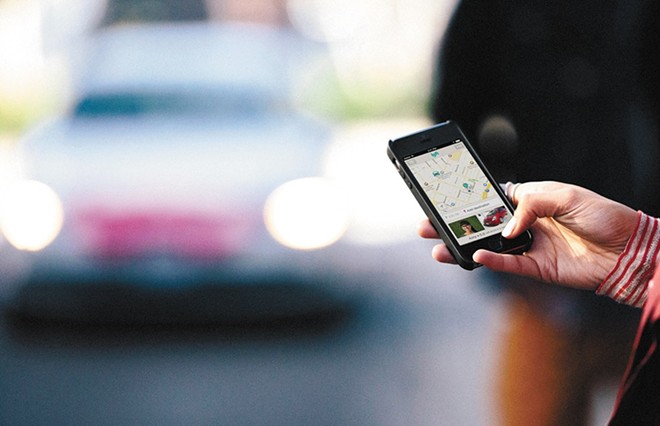 With UberEATS' entry into the Spokane market, it's become easier than ever to get food delivered here.
Spokane was abuzz earlier this week with the announcement that UberEATS would begin service here. Small businesses across the country cringe at news of tech giants coming to their towns, but Spokane’s food delivery services are ready to take on Goliath by exploiting its shortfalls.

Brando Delivery began about two years ago, with the idea of delivering food people want directly to their doors.

It's also aiming to fill gaps that UberEATS has left wide open. While UberEATS only delivers restaurant food, Brando has taken to snacks, beer and even liquid for e-cigarettes. Seth Mann, Brando Delivery's general operations manager, says they're permitted to sell pretty much everything but cigarettes and hard alcohol.

“We are more like a Target,” Mann says. “We got all the bits and ends and all the junk food you could ever want.”

Mann says there's a lot of room to grow into a “general convenience” app, delivering anything anyone might need as well as food from restaurants. He says they're working on ironing out a deal to deliver for Blaze Pizza.

After hitting some bumps in the road with the delivery structure, warehouse stock and technical difficulties with the app, Mann says, Brando had to go offline for about a year.

Brando relaunched about six weeks ago. Now, it's focusing on having its warehouse fully stocked, and maintaining an organized delivery structure. Now that the app is running smoothly, Mann says, they're hoping to hone in on their target audience: college students.

Being so soon after the relaunch and in the middle of summer, he says, deliveries are a bit slow right now, less than 10 a day at around $25 per delivery. Mann says that doubling deliveries is the next target.

Spokane food delivery company Take Out Deliveries is much closer to UberEATS’ approach; they both deliver restaurant food to people’s doors. Take Out, like Brando, will also deliver almost anything you ask them to, but their focus is more on restaurants. Take Out opened seven months ago, but UberEATS already has it beat on number of participating restaurants. UberEATS delivers from about 50 locations, according to their website. Take Out delivers from six, though it's working toward getting five more to come onboard.

Take Out Deliveries owner Eric Prunier says UberEATS’ arrival was huge, but he doesn't plan on changing strategies much. He says his business is all about customer service and community.

“It has really come out how community-driven Spokane is,” says Prunier. “I would say the big thing is working alongside the partners we have. I don’t compromise as far as the customer- service end goes.”

An important difference, he says, is that Take Out doesn't charge restaurants for its service; UberEATS does. Take Out maintains strictly on-delivery fees; the same for UberEATS. Take Out’s delivery fee is $3 when ordering from partner restaurants, with the charge increasing by mileage. UberEATS’ fee is $4.99 no matter the delivery.

Prunier says that most importantl, his company will have the upper hand when it comes to making connections with customers and partners. To keep the customers happy, Take Out makes sure delivery drivers are easy to contact in case anything changes with the order. They also distribute punch cards ,where every sixth order earns customers a free delivery.

To keep the restaurants happy, Take Out works with them on promotions. They recently worked with Garland Sandwich Shoppe on a social media commercial that received more than 2,500 views in its first day.

Prunier says Take Out has grown from 30 deliveries in its first month to about 300 last month. The short-term goal, he says, is to attract more customers and drivers.

Take Out is in a conflicting situation. Prunier says he's seen a lot of people come out in support of his business for the local aspect, but others argue that UberEATS still supports local restaurants and delivery drivers.

While the threat of UberEATS making Take Out obsolete lingers in the back of Prunier’s mind, he says the early successes and new competition excite him, and he has an optimistic outlook.

“Who know what [UberEATS] could do in the next phase of things?” he says. “It is kind of worrisome, and not, at the same time.”

Brando's Mann has a similar perspective. He says he hopes local companies can stay competitive.

“It is like a giant coming to town,” Mann says. “Of course we worry, but I also see their pay structure and how they charge people, and that’s where I start to be not as worried.”