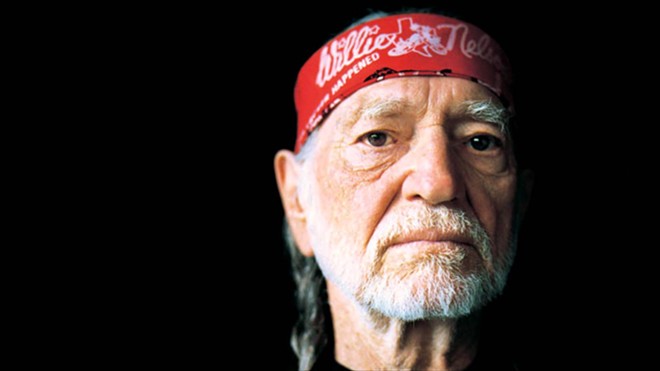 Willie Nelson headlines a sold-out show at Northern Quest on Tuesday.
There's a bevy of good things brewing in the Inland Northwest this week, so be sure to scan our event listings and Staff Picks for some worthy entertainment options. Here are some options for the week ahead:

LIVE BANDS | The Bartlett hosts what could turn out to be one of the best shows of the summer in Pinegrove,  a New Jersey-based indie crew with shades of Pavement and Wilco in their sound. Here's a little sample:


EDUCATION | Ever consider getting into beekeeping, either to help the bee population or generate some delicious honey for your house? There's a free Introduction to Beekeeping class tonight at Shadle Library, so buzz on over.

LIVE BANDS | When it comes to American treasures, Willie Nelson is pretty damn high on the list. The man is known as a country star, but his shows touch on jazz, folk, rock, you name it. He's joined for this sold-out gig at Northern Quest by Kacey Musgraves, one of country's brightest rising stars. Find a ticket if you can.

LIVE BANDS | Memphis band Ex-Cult brings some punky sludge-rock to  the Observatory for a show also featuring Peru Resh and The Birth Defects. Should be a blast; here's a little Ex-Cult:

SYMPHONY | Head on out to Arbor Crest for the Spokane Symphony's Soirée on the Edge, a scenic pairing of classical tunes and wine that should be pretty sweet.

FOOD | Second Harvest hosts a Stir Fry Class, where you'll learn everything you ever needed to know about stir-frying at home, no wok necessary.

COMEDY | Piff the Magic Dragon kicks off a weekend of laughs at Spokane Comedy Club tonight.

BENEFIT | Join the good people from the Spokane Humane Society for Yappy Hour, a benefit social to recognize the group's 120-year history.

THEATER | Million Dollar Quartet tells the story of the fateful night that Elvis Presley, Johnny Cash, Carl Perkins and Jerry Lee Lewis met up at Sun Studios in Memphis for an impromptu recording session. Great tunes, and a great show, and it's being produced at the Kroc Center in Coeur d'Alene.

FESTIVAL | The Blue Waters Bluegrass Festival kicks off a weekend of great music on Medical Lake, including national and regional acts, and a tribute to the Stanley Brothers.

FESTIVAL | It's Garland Street Fair time again, where you can peruse the booths, listen to tunes, have a few beers and ...

FILM | ... go to our next Suds and Cinema at the end of the day, going down at the Garland Theater! It's a Will Ferrell double-feature of Anchorman and Step Brothers, complete with River City brews, Brain Freeze ice cream and assorted other goodies.

FESTIVAL | It's also the day of Gleason Fest, so be sure to mix in a stop at Riverfront Park for a great cause and tunes by Grouplove, the London Souls and more.

Will UberEATS devour its competitors in Spokane?