NEWS: Now that UberEATS is here, what will happen to competing delivery services here in Spokane?

WHAT'S UP? This week you can check out the Garland Street Fair, Suds and Cinema, Blue Waters Bluegrass Festival, Gleason Fest and more; what to do with your free time? 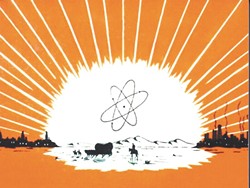 Beating the heat
A contractor working on Hanford's tank farm has a new way to keep workers from overheating while they work in suits that keep out radiation but trap heat in triple-digit temperatures, the Tri-City Herald reports.

Buy generic, except when you can't
ProPublica and the New York Times report that insurers are increasingly requiring patients to buy brand-name drugs, even when generic versions that would save money are available.

Israel plans to shut down media outlet in Jerusalem
The Israeli communications minister announced Sunday that he would attempt to shut down Al Jazeera's Jerusalem operation and revoke press credentials for its journalists, the news outlet reported.

"Al Jazeera denounces this decision made by a state that claims to be 'the only democratic state in the Middle East,'" the network said in a statement.