Spokane County Commissioners voted unanimously yesterday to take a proposition off the November ballot that could have raised property taxes for county residents. The move comes less than a month after they voted to put it on the ballot in the first place.

Commissioners Al French and Josh Kerns say the county will pursue other ways, including a partnership with the city of Spokane, to solve a $10 million budget shortfall facing the county in 2018. After seeing the state's budget, which will already raise property taxes for many Spokane County residents, French and Kerns decided against sending another potential tax increase to voters. They said that voters would not have the ability to make an "unbiased" decision this November.

French says he "fully expects" that next year, a proposition similar to the one on which commissioners just reversed course will be on the ballot. Property taxes resulting from the McCleary decision will dip in 2019 for Spokane County residents.

French and Kerns say that a variety of factors have contributed to the budget deficit, including "unfunded mandates" from the state, and a funding model that sees county expenses grow at a greater rate than counties are able to increase taxes. French says it's an issue that is affecting counties across the state, not just Spokane County.

In the meantime, however, the county is looking at other ways to solve its 2018 budget shortfall. It has asked department heads throughout the county to reduce operating budgets for 2018. Additionally, the county has announced a partnership with the city of Spokane. In a press conference yesterday, Spokane City Councilwoman Candace Mumm and City Administrator Theresa Sanders spoke about such a partnership alongside Kerns and French.

"While the county embarks on their challenging budgeting work over the many months ahead," says Sanders, "we hope to be side-by-side with them in that endeavor."

Mumm said she expects the city and county, along with public safety employees, to work together to focus on how to reduce costs and create budgetary relief.

"I think there's a lot of new things we can do to share what we've learned at the city to help the county through this current crisis," Mumm says. 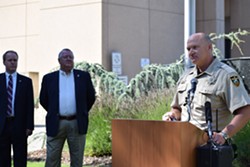 Wilson Criscione photo
County Sheriff Ozzie Knezovich speaks at the press conference as county commissioners Josh Kerns and Al French look on.
The most likely area of collaboration between the city and county will be around criminal justice. French says that the city is a "big player" both in the court system and the jail.

"So they represent an opportunity for us to find ways to streamline not only the criminal justice system, but also our cost," French says. "We want equal justice, quicker. That's one of the mantras for the [Spokane Regional] Law & Justice Council. But now the cost has to be factored in as well."

More specific ideas of what services may change or be cut are yet to come, but French has said that everything is on the table. On the law enforcement side, however, Spokane County Sheriff Ozzie Knezovich expressed concern about the budget during Tuesday's press conference. He said this would be the last time he stands in front of the public and tells them "we'll bump it one more year."

The county will host several public forums and presentations before voting on the 2018 budget in December. French said it would be "the most transparent and most publicly involved budget process we've had since I've been here at the board."

Says Kerns, "This is a total new direction for the county, in involving the public."