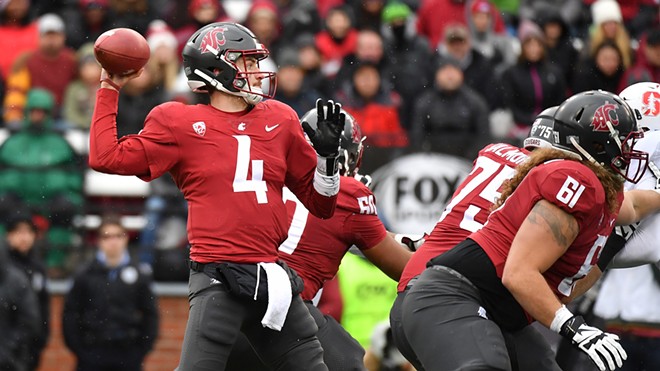 WSU Athletics
Luke Falk threw for 337 yards, rallying Washington State past Stanford 24-21 and giving Falk the Pac-12's all-time record for passing yardage. He now has 13,801 yards with the possibility of playing in four more games.
Luke Falk, who walked on to the Cougars' roster four years ago, is now the Pac-12's all-time passing leader with 13,801 yards, with the possibility of four more games remaining. He also passed three quarterbacks Saturday to move into the top 10 all-time in NCAA Division I.

Falk completed 34 of 48 passes for 337 yards, including a 6-yard toss to Jamire Calvin just inside the 5-minute mark that proved to be the game-winner as No. 25 Washington State defeated Pac-12 North Division-leading Stanford 24-21 in Pullman, finishing 7-0 at home for the first time in school history. In addition to Oregon State's Sean Mannion, he leaped over Corey Robinson of Troy and North Carolina State's Philip Rivers, who's spent his past 14 years quarterbacking the Los Angeles (formerly San Diego) Chargers.

Now ninth on the NCAA Division I career yardage list, Falk can catch Marshall's Rakeem Cato, Hawaii's Colt Brennan and maybe even Boise State's Kellen Moore in his remaining games, but BYU's Ty Detmer is likely out of reach: Falk needs to throw for 1,231 yards to move into fifth place all-time. The most prolific passer in NCAA history is Case Keenum, who threw for 19,217 yards from 2007 to 2011 in Houston's high-octane offense.

His next shot at the record books is a homecoming of sorts: Falk, who was born in Logan, Utah, and played for Logan High School his sophomore and senior years, will be 80 minutes south in Salt Lake City as Utah hosts the Cougars on Saturday afternoon; kickoff is 2:30.

Twenty Cougars seniors playing their final home game were part of history: It was the first time Washington State beat Stanford in Pullman since 2007, and only the fifth time it's happened in the past 45 years. It also was the first time in 81 years that a Stanford team played in snow, which fell throughout the game; the Cardinals, then called the Indians, lost 7-0 to Columbia in November 1936 at the Polo Grounds, home to baseball's New York Giants.

With temperatures at Martin Stadium dipping into the low 30s, it was also the coldest game for Stanford since the 1970 team, featuring Heisman Trophy winner Jim Plunkett, suffered a 31-14 loss at Air Force in a November game in Colorado Springs, the low point of a season that ended on New Year's Day 1971 in a Rose Bowl victory over Ohio State.

Struggling with depression or anxiety? Healing Spokane forum can help