As I compile my upcoming list of the year’s best films, I’m realizing there was actually a lot to like in the towering inferno that was 2017.

But there was also plenty to hate, and just to get these experiences out of my system, here are a handful of the dumbest, lamest, most torturous watches of the last 12 months.

CHiPs
THE WORST TREND OF THE YEAR
The R-Rated Comedy

With the exception of the very funny Girls Trip, which was a sleeper hit this summer, every crude, raunchy, adults-only comedy of 2017 was dire. Dreary. Lame. ABYSMAL.

The absolute worst of the bunch — not just of this category, but of all movies — was CHiPs, a toxic adaptation of the ’70s cop show. Its screenplay is credited to director/star Dax Shepard, but it could just as easily have been written by a 15-year-old boy who learned the few things he knows about swearing and sex from a 4chan board. It possesses not a single redeeming virtue.

More horrible R-rated comedies:
Baywatch, another bottom-of-the-barrel TV adaptation that couldn’t even figure out what was funny about the old show in the first place.
Fist Fight, a zero-joke, role-reversed take on Three O’Clock High, with Charlie Day and Ice Cube at their most annoying.
The House, a Will Ferrell-Amy Poehler vehicle so sloppy and haphazard that I’m not convinced it was ever finished (and don't let Chance the Rapper convince you otherwise).
Rough Night, one of the laziest, most sluggish comedies ever made about drugs, corpses, swingers and mobsters.
Snatched, which brought Goldie Hawn back to the screen and saddled her with lame slapstick.
(And while I didn’t see the currently-playing Father Figures, starring Owen Wilson and Ed Helms, I’ll assume it belongs here, too.) 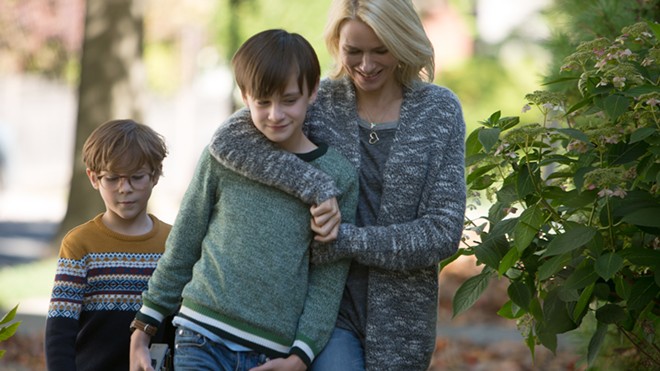 THE BEST OF THE WORST
The Book of Henry

Director Colin Trevorrow’s first film post-Jurassic World was this wacko family fable featuring a child genius, a brain tumor, a handsome neurosurgeon, a whimsical treehouse, a cutesy old-school diner, a climactic talent show, and a long scene in which Naomi Watts threatens a dude in a gun shop so she can buy an illegal sniper rifle to kill Hank from Breaking Bad.

I suppose it’d be possible to make a funny, smart, inventive feature about the little emoticons we all use in lieu of writing actual words — hey, they’ve made a few good movies about Lego! — but this was, as reported, barely a movie, a pathetic, unoriginal, unfunny, ploddingly-paced, badly-animated attempt to sell more plush toys of the poo and high five emojis. It’s the cinematic equivalent of ¯\_(ツ)_/¯.

I’d also like to give a dishonorable mention to the Power Rangers reboot, with its ever-so-tactful use of a Krispy Kreme location as a major plot point. 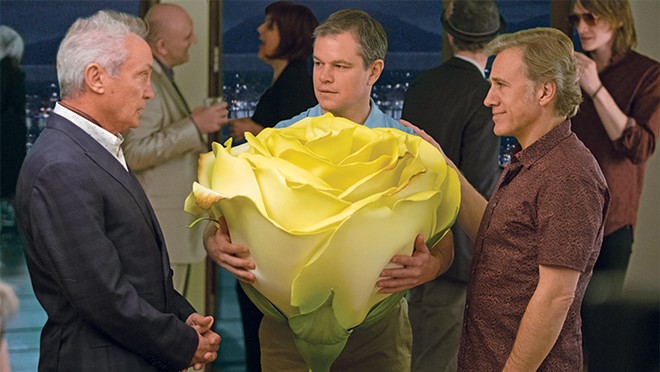 I love Alexander Payne, particularly when he’s in the savagely satirical mode of his 1996 debut Citizen Ruth and his masterpiece Election (1999). His latest comedy, about people being shrunk down to Thumbelina size, establishes a potentially fascinating what-if premise and then hardly scratches the surface, losing its way through increasingly baffling subplots. It’s Payne’s worst by some margin.

THE KING OF FLOPS
The Dark Tower

2017 was a banner year for movies based on Stephen King properties, with Netflix releasing the stylishly morbid features 1922 and Gerald’s Game, and It becoming the highest-grossing horror film ever. The Dark Tower, meanwhile, compacted King’s sprawling fantasy saga into a 95-minute cacophony of lame special effects and incoherent storytelling. It was meant to kick off an entire franchise but was, in fact, a non-starter.

THE MOST STUPIDEST
Geostorm

Neil DeGrasse-Tyson’s worst nightmare, a disaster movie in which every law of physics is torn asunder and trampled over. Gerard Butler plays an American scientist (!) named Jack Lawson (!!) who’s blasted into space (!!!) to stop a meteor from crashing into Earth. Or something. It’s funny in a “can you believe how seriously they’re taking this idiocy?” kind of way, but it’ll also make every functioning part of your brain hurt.

THE MOST IN NEED OF A GOOD MUSTACHE
Justice League

All jokes about Henry Cavill’s CGI-aided clean-shaven face aside (although the reported $25 million price tag on digitally deleting his ’stache is a hilariously indulgent figure), Justice League found DC trying to make a Marvel movie and failing miserably. This felt even more badly focus-grouped than last year’s Suicide Squad, a film that was trying so hard to please everybody that it pleased no one at all.

THE SNOWIEST
The Snowman

Although I was in the minority of critics who seriously disliked the snowbound thriller Wind River, I have to admit that film was Fargo when compared to this blizzard-y mystery, an incoherent whodunit about a serial killer who places the severed heads of his victims on top of squat, twiggy-armed snowmen. Spooooooooky! The only good thing to come of this fiasco: All those “Mister Police” memes on Twitter.