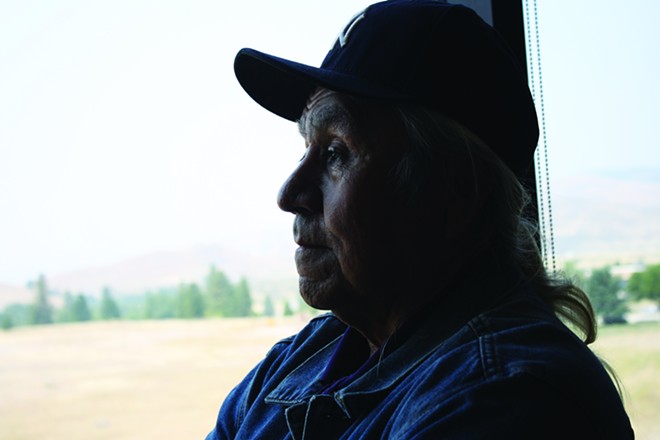 Samantha Wohlfeil photo
Confederated Colville Tribes Chairman Michael Marchand is a Sinixt descendant and says the Colville Tribes will keep fighting for Sinixt recognition in Canada if the government there appeals two recent decisions that recognized the Sinixt have hunting rights on traditional lands there.

In a major victory for people who are part of the Arrow Lakes (Sinixt) tribe — one of the 12 Confederated Tribes of the Colville Reservation — the Supreme Court of British Columbia has issued a ruling officially recognizing the Sinixt as aboriginal people with hunting rights in Canada.

The case stems from an October day in 2010 when Richard Desautel, a Sinixt descendant member of the Confederated Colville Tribes, hunted for elk in , then alerted B.C. authorities about the kill in an intentional move to force the courts to examine the issue.

"Not only was he directed to go and hunt the elk for ceremonial purposes, and indeed the meat was given to a number of elders," explains his lawyer Mark Underhill, "but he was also instructed to let the conservation officers know what he was doing in the hopes he would be charged so this question of Sinixt hunting rights could be tested in court."

In bringing charges against Desautel, the provincial government argued that although the Sinixt may exist in the United States, they no longer exist in Canada, and don’t have hunting rights there. The Arrow Lakes Band was declared “extinct” by the Canadian government in 1956, and their reserve land reverted back to the provincial Crown’s ownership.

But the Colville Tribes argued, and now two courts have agreed, that their people lived in areas that now straddle the border long before European and their rights should be upheld there, despite the international border that was imposed.

Justice Robert Sewell discusses that history throughout the Dec. 28 decision:

"Prior to 1846, Great Britain and the United States disputed the right to exercise sovereignty over what was then called the Oregon territory. In 1846, these powers entered into the Oregon Boundary Treaty, which established the 49th parallel as the boundary between British and American territory. It goes without saying that the Sinixt played no part in the discussions leading up to this treaty."
...

"In this case, the Boundary Treaty of 1846 split the traditional territory of the Sinixt people into two pieces. By far the larger piece was north of the 49th parallel, in what was eventually to become Canada. A smaller portion became part of the United States. Despite this, the trial judge made unchallenged findings that hunting in the traditional territory that is now in Canada was carried on in pre-contact times, was integral to the Sinixt aboriginal culture and that there has been no breach of continuity in the practice.

As a result of the actions of non-aboriginal authorities, the Sinixt people who make up the Lakes Tribe can only continue to exercise that activity by crossing an international boundary, but subject to the Crown’s sovereign immunity argument, I do not see how that necessity brings them outside of the protection of s. 35.

I therefore conclude that the fact that the Sinixt people in issue in this case are now resident in the United States does not preclude them from being considered to be an aboriginal people of Canada."


It’s hard to convey just how important this decision is for the Sinixt people, Underhill says.

“They have the right to hunt, but more importantly, and this sounds a little strange to say, they’re getting their identity back,” Underhill says. “That just means everything to the Sinixt people. They’ve been fighting for generations for recognition in Canada.”

The intentional move to force the courts to examine the issue of Sinixt rights rings similar to the Fish Wars of the ’60s, in which Coast Salish tribal members went fishing around Washington without permits, getting arrested dozens of times and eventually resulting in a court decision cementing tribal treaty fishing rights here.

The provincial government can still appeal to the B.C. Court of Appeal, and the Supreme Court of Canada after that. Marchand says the tribes hope the appeals stop, but they will continue fighting the case as long as needed.

Marchand says that there aren't Sinixt people hunting in Canada right now, but those who may be encouraged by the court's decisions would make a concerted effort to be good stewards.

"They're not going to get flooded by Colville hunters, but maybe a few. It will start gradually," Marchand says. "I think we have a good track record of being good stewards of the land, and improving hunting situations as best we can."

Aside from the major question of the tribe's existence in Canada, another issue discussed during the appeal was whether acknowledging the hunting rights would interfere with Canadian sovereignty and ability to manage who crosses the border, but the court essentially said that is a different case for another day, Underhill says.

"We’re talking about his right to go hunt, not to cross the border," Underhill says. "Mr. Desautel came across with no issue. There may be some future case where some Sinixt person is held at the border, but the court says we’ll deal with it then. But there’s no problem with them being able to hunt in Canada."

As for Desautel, who had been charged with hunting without a licence and hunting big game while not being a resident of British Columbia, he was acquitted of both charges with the lower court's decision issued in March, which the recent decision upholds.