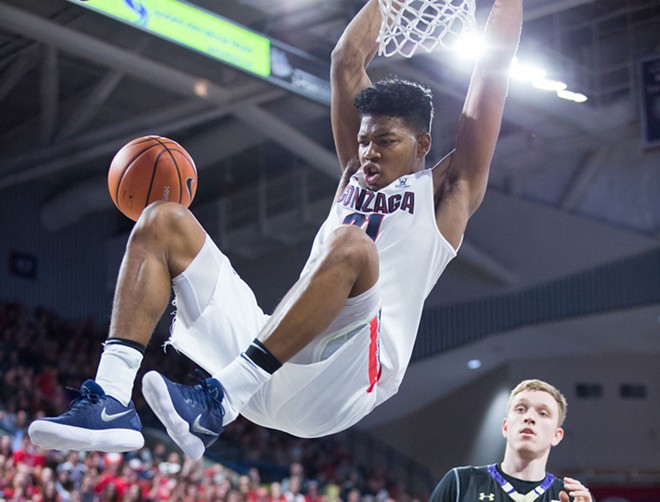 Libby Kamrowski
Rui Hachimura is coming into his own in conference play.
It’s been a rough year for the top teams in college basketball, and last week was perhaps the roughest yet. Nine teams ranked in last week’s AP Top 25, and four of the top five, lost games to unranked teams.

Going on the road in conference play is never easy. Coaches know their league rivals better. Players know each other’s tendencies. Familiarity makes it more likely that a good team will stumble to an inferior opponent.

But so far for Gonzaga this hasn’t been much of a problem.

The Zags have won their first four West Coast Conference games by an average of 32.8 points. Saturday’s win in Los Angeles against Loyola Marymount was the closest of the four. The Lions managed to lose by just 19. Two days prior against Pepperdine in beautiful Malibu, the scene was a bit more gruesome. Gonzaga rolled over the Waves 89-59.

The Waves haven’t beaten the Bulldogs since January 18, 2002. It’s a 34-game losing streak that is older than some of Gonzaga’s current high school recruits.

This sort of thing seems to happen every year. Gonzaga rattles off win after win in the WCC as good teams in other leagues stumble. Fans around the country point to the relative weakness of the WCC as a way to discredit Gonzaga’s accomplishments. But this year that argument is a bit harder to make, in part because so many of the top teams are taking losses. Some of them are losing to teams that Gonzaga has already played.

Like on Sunday, when the then No. 1-ranked Michigan State Spartans lost 80-64 to Ohio State — the same Ohio State team that Gonzaga blew out 86-59 back in November. Even teams Gonzaga has lost to, like Florida, are helping the Zags’ case. Ranked No. 7 when they defeated Gonzaga 111-105 in double-overtime, the Gators have since fallen out of the AP Poll. But last Tuesday they took down No. 11 Texas A&M.

Super subs spark Gonzaga’s non-stop attack
One notable aspect of Gonzaga’s hot start to league play has been the team’s ruthless approach in game. The Zags put their foot on the gas and leave it there for the entire 40 minutes. Even when Mark Few goes to his reserves there is no drop off in the level of play.

There’s often a new energy when a player comes off the bench. They’ve got fresh legs and a motivation to earn more playing time. But usually they’re on the bench because they’re not as good as the players in the starting lineup.

For freshman Corey Kispert and sophomore Rui Hachimura, though, that’s not the case.
Hachimura is Gonzaga’s leading scorer in conference play, averaging 13.3 points per game in just over 17 minutes off the bench. Last season, as a freshman, Hachimura was lauded as perhaps the greatest Japanese prospect of all time, though still a raw player. Well, he’s developed. He’s not just scoring, but he’s scoring with unbelievable efficiency. He’s knocked down 20 of his 28 shots from the field and all but one of his free throws over these first four games, and leads the WCC in offensive rating.

Kispert owns the eighth highest offensive rating the conference, and he’s still recovering from an ankle injury. He’s averaged just shy of 10 points through four games, but his calming presence may be more important than his scoring. Turnovers had been a big problem for Gonzaga, but since league play began Kispert has committed just one.