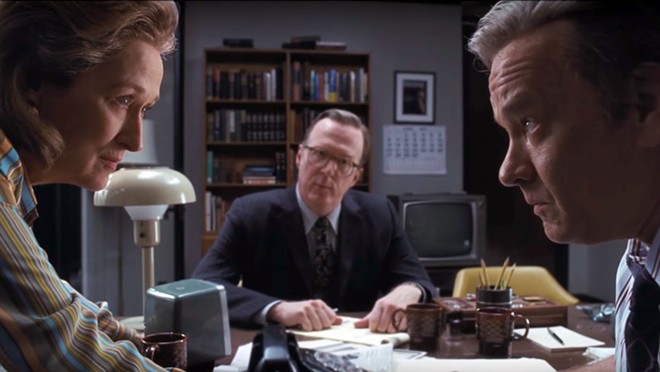 Meryl Streep and Tom Hanks in Steven Spielberg's The Post.
How 'bout those Golden Globes, huh? Oprah inspired everybody, Natalie Portman threw some A+ shade, and Three Billboards Outside Ebbing, Missouri became the latest Best Picture winner to become the subject of critical backlash.

And if you wondering what all the hoopla about The Post and I, Tonya was about, now you can find out: They're both finally hitting Spokane theaters this weekend, alongside the newest star vehicles for Liam Neeson, Taraji P. Henson and everyone's favorite British teddy bear.

THE COMMUTER
Remember that movie where Liam Neeson was on a plane and had to figure out which passenger was the bad guy? No? Well, this movie is pretty much the same thing, except now it’s set on a train. Cool. Rated PG-13.

I, TONYA (3 stars)
A raucous bio-comedy about figure skater Tonya Harding, who triple-axelled into infamy in the early ’90s. Margot Robbie is terrific as the disgraced Harding, and Allison Janney, who just walked away with a Golden Globe, is entertainingly monstrous as her mother. Rated R.

THE POST
Steven Spielberg’s latest concerns 1970s Washington Post publisher Kay Graham (Meryl Streep), the first woman to ever hold such a position, and editor Ben Bradlee (Tom Hanks) fighting for the right to publish the Pentagon Papers, which detailed the Johnson administration’s lies regarding the Vietnam War. Give it all the Oscars. Rated PG-13.

PROUD MARY
Taraji P. Henson stars as an assassin-for-hire who becomes the unlikely chaperone of a young boy after a hit job goes wrong. Sounds kind of like a gender-flipped version of The Professional, but hopefully without that movie’s weird predatory vibes. Rated R.