Here's how the state superintendent would fix it 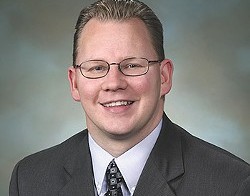 Yet the bill at the same time restricted how much school districts could collect through local levies. And for some rural school districts, that restriction didn't represent progress at all.

Sure, he says, Davenport will get more money from the state. But because the bill limits Davenport from collecting the full $4.08 per $1,000 of assessed property value from a local levy passed by Davenport voters, it results in a loss of funds for the district overall.

It's a problem that Chris Reykdal, the state's Superintendent of Public Instruction, hopes to fix in the 2018 legislative session. He plans to introduce legislation that will make changes to the bill, House Bill 2242, passed last year. The changes would provide school districts with more funding flexibility, giving relief to a small, rural school districts like Davenport.

"Some districts are struggling to adequately provide programs that are not considered basic education," Reykdal says in a statement. "To solve this problem, districts need more funding and they need more flexibility in their local levies."

Kowalkowski says there are always things that districts want to pay for — and local voters want — that may not be funded by the state. He points to district costs that may not be covered under basic education, like funding a drama or paying for a new school bus. He doubts the state could ever fully fund everything since each district has its own nuances and priorities.
"Superintendents appreciate Reykdal's effort to try and bring back more local control," Kowalkowski says. "If local voters want to support local schools, they should be able to do so."

This proposal would allow districts to choose a levy option that could bring in more money than the $1.50 per $1,000 of assessed value cap that the legislature passed last year. Any levy above $2.31 per $1,000 of assessed value would be reduced by $0.81, which cancels out the increase in property taxes statewide stemming from HB 2242. So voters wouldn't see an increase in taxes unless they vote for it. And Reykdal's proposal would increase levy equalization — a state program that gives additional funds to districts with lower property taxes than the state average. (Read the details of the proposal here.)

You may recall that the legislature's bill to fund schools last year was aimed, in part, at taking away district reliance on local levies to pay for teacher salaries. The previous Superintendent of Public Instruction, Randy Dorn, argued that reliance on levies allowed richer districts to attract better teachers and implement better technology than districts that can't raise levy dollars. Dorn even filed a lawsuit against school districts on that basis.

The bill passed by the legislature last year took away that reliance by capping the amount a district can collect at $1.50 per $1,000 of assessed value. But, as Reykdal says, that left some districts in a bind. That's why he's proposing a little more flexibility.

The superintendent's proposal wouldn't only benefit smaller districts like Davenport. Seattle Public Schools could bring in the same amount of money as they did before HB 2242 passed last year, a difference of potentially more than $100 million.

Spokane Public Schools, too, could bring in more money under the proposal. Linda McDermott, SPS chief financial officer, says HB 2242 increased the district budget overall, unlike Davenport. If voters approved a levy above the $1.50 per $1,000 cap, then Spokane could bring in even more money. But the timing is tricky since Spokane's current levy expires at the end of this year and the district has a levy with the $1.50 cap on the ballot for a special election next month.

"We understand what [Reykdal's] proposal is, but we haven't internally discussed the response to the proposal if it should pass," McDermott says.

What Spokane does feel strongly about, she says, is that districts need more funding for special education.

"That is pretty much a universal need," McDermott says.

Nathan Olson, a spokesman for OSPI, says levy flexibility is Reykdal's priority for the 2018 legislative session, but he says finding more money to fund special education in Washington schools is the other main priority.

He urges that the changes need to be made this year because the rules for levies change Jan. 1, 2019.

"I urge legislators to either make this change or delay the automatic levy reductions by one year," Reykdal says, "in order to develop a more rational and sustainable solution for local districts."