Despite the Idaho Department of Education's effort to carefully craft education standards on climate change over the last year, lawmakers in the state's House Education Committee remain skeptical of teaching students that human-caused global warming exists. 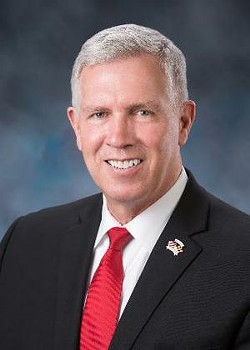 Rep. Scott Syme
A year ago, the Idaho House Education Committee approved science standards for but excluded five paragraphs related to climate change. As the Inlander wrote in June, it meant Idaho was the first state where lawmakers had successfully removed the teaching of climate science from curriculum requirements. And the decision last February came with comments from Rep. Scott Syme (R-Caldwell) about the need to cover "both sides of the debate" when it comes to human-caused global warming, in spite of the scientific consensus on the topic.

Little has changed this year. This week, the House Education Committee approved a set of climate standards with some discussion of climate change, but they rejected supporting content dealing with climate change and human impact on the environment, as well as a section on nonrenewable sources of energy.

The state's Senate Education Committee will have its own say in the standards. But if they're approved as they were in the House, says Glenn Branch, deputy director of the National Center for Science Education, it "would be a problem for teachers."

"There would still be a little about human impact on climate in the standards," Branch tells the Inlander. "But a whole lot of content on climate change and science, in general, is taken out. That makes the standards less useful."

Last May, a science committee of educators from around Idaho came up with revisions to the five paragraphs on climate change that the legislature had nixed in February 2017. Branch says those revisions, which made it to the House Education Committee, were a little vague and watered down when it came to human-caused climate change. Overall, though, he says the science wasn't compromised.

Last week, the Spokesman-Review reported that Rep. Syme said he had "learned a lot about standards" since last year. But he was concerned because it was his stance that the teaching of climate change  "inquiry-based." "I don't care if the students come up with a conclusion that the earth is flat — as long as it's their conclusion, not something that's told to them," he said. Syme, who did not return the Inlander's request for comment on this article, motioned to approve the standards on Wednesday, except for one. The motion also took away supporting materials related to human impact on the environment. The committee voted in favor of his motion 12-4.

"When you have conclusions in standards, it stifles inquiry, and I don't think that's the intent of the department," Syme reportedly said at the meeting.

Branch, who has studied and monitored anti-science legislation across the country, says it doesn't make sense to embrace a debate on climate change. He notes teachers don't tell students that there are two sides to the fact of the earth being round. And since 97 percent of climate scientists agree on human-caused climate change, this is "pretty much the same situation."

If the standards uphold as the House Education Committee approved them, Branch says science teachers in bigger cities, where there's generally more acceptance of climate change, likely wouldn't have an issue even if these standards aren't adopted as presented. It's other, more rural areas where students might be misinformed.

"This kind of decision will really harm the climate literacy of Idaho students, particularly in these smaller rural areas," Branch says.

"These are a pretty good set of standards, thoughtfully developed over a period of years," Branch says. "And all of the sudden they're second-guessed by a committee without relevant training in science."