When the orange construction signs and chain-link fences go up, storefronts become obscured, sidewalks are diverted and business ultimately slows as a result.

This is a feared scenario for businesses on North Monroe as a major road revitalization project slated for April between Indiana and Kiernan avenues looms ever nearer. To ease concerns, the city of Spokane has set forth a pilot project that includes a media campaign, business consulting and a $150,000 “facade improvement.” But not everyone is on board.

While some business owners agree that the project is needed in the burgeoning district, the anxiety remains despite the city’s effort. This is something the city is well aware of, says spokeswoman and director of strategic development Marlene Feist. This is directly impacting people’s livelihoods, she says.

Brianna Troutt, who owns the barber shop Classic Cuts with her husband, worries about the potential loss of walk-in customers.

“I know Monroe needs to be fixed and updated, but the construction will prevent some people from coming down,” Troutt writes.

All told, about 80 businesses will be affected by the project, which is expected to last eight months, Feist says.

But not all of the business owners are as compromising as Classic Cuts. Prohibition Gastropub, which initially declined to comment on the story, expressed its concern via Facebook last week, not only regarding the impending construction, but the way the city has handled its concerns:

“We won't try to lie to you and tell you we aren't scared to death about the road project on Monroe. We are. And, it is with heavy hearts that we share that the city of Spokane - Municipal Government awarded a $50,000 contract to Rogue Heart Media Inc. to promote businesses along Monroe during construction.”

The post included a photo of a letter from Rogue Heart Media sent to the city of Spokane last year, which appeared to deride the pub (and others) for its opposition to the project, though it did not call them by name.

“We do not feel that we will receive adequate marketing representation while the project is underway based on the tone of the letter,” the pub wrote. “The project is going forward regardless. We will survive. It's all just very disappointing.”

Rogue Heart, also located in the North Monroe Corridor, came out in favor of the revitalization project in a strongly worded letter to the city last year. Megan Kennedy, principal producer for the media company, says the letter’s language doesn’t reflect the character of Rogue Media and that its sorry for any harm it may have caused. The letter was written “at a time in the planning process when everyone was at their worst behavior,” Kennedy says.

“By nature, we are a very collaborative company. Our entire structure is based on authentic creative nonfiction,” she says.

Rogue Media was awarded the $49,000 marketing contract a couple weeks ago in an effort to remind locals that the businesses are still open.

“Monroe is a vibrant and somewhat eclectic destination, in my opinion,” Kennedy writes to the Inlander. “The businesses that are here offer such a mix of experiences: from retail shopping and dining, to professional services, to personal essentials and education, etc. We have businesses that have been here for decades, as well as new entrepreneurs currently working toward their grand opening.” 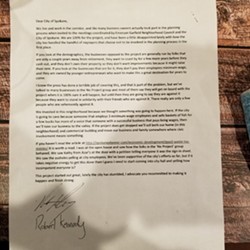 A letter sent to the city of Spokane from Rogue Heart Media. The media company says the letter was written at a time of high emotion.

The marketing approach is meant to be more general, rather than targeting specific businesses in the area, Feist says.

“Achieving success demands the help of our community, too,” Feist writes. “We need citizens to do their part by continuing visit their favorite businesses during construction projects.”

The construction project itself, budgeted at more than $8.7 million (including stormwater improvements to the hill west of Monroe) is intended to improve pedestrian facilities by reducing traffic lanes, widening sidewalks, adding on-street parking and lighting and other facilities. The revitalization is intended to make the busy road safer for pedestrians and more “economically vibrant.”

Can Elkfest survive? 'Are you illegal?' and morning headlines