2018 March for Science draws a crowd in Spokane

Eric Schucht
Hundreds gatherer at Riverfront Park for the second annual March for Science. Rallies and marches were held in cities across the country, aimed at increasing funding in schools for science education and further environmental protection by the government.

Local residents Jim Harrison and his spouse of 45 years, Beatrice, sat on the steps next to the clock tower at Riverfront Park — patiently waiting for the rally to begin. The couple carried with them a sign that reads “MARCHING FOR MY GRANDDAUGHTERS’ FUTURE” and had pictures of their three grandchildren down below.

The two say they are worried about the state of world their three grandchildren will inherit.

“The idea that the wealthy would destroy our earth at this point in time without any remorse about what's gonna happen in the future is just disgusting to me,” Jim Harrison says. “And I think we need to make a big change in this country.”

The Harrisons were part of larger group of about a thousand who gathered Saturday in cities across the country for the for the second annual March for Science. The first March for Science last year brought more than a million people to what turned out to be the largest science advocacy event in history.

This year’s rally adopted the tagline “Vote for Science," aimed at prompting people to vote for environmentally friendly legislation and persuade politicians to increase funding for science education. There were stations at the march for people to register to vote. Event coordinators like Amanda Braley say she and many others feel that the government isn't doing enough for the environment and science in general.

“Honestly, we’d prefer not to have to do this,” Braley says. “We need to remind people that these issues are still at hand.”

The rally began at 12:30 pm at the clock tower in Riverfront Park. Speeches were then given by four guest speakers. University of Washington medical student Mara Hazeltine advocated for an increase in funding for science education in all classrooms across the country. Signs dotted the crowd that read “Make America Scientific Again!” and “It’s Not Nice to Hurt MOTHER NATURE.” 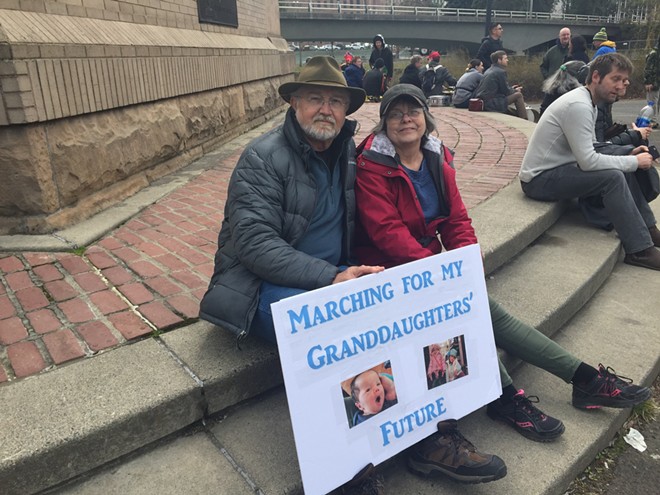 Eric Schucht
Jim and Beatrice Harrison attend the March for Science in Spokane with the hopes of creating a more environmentally healthy world for their three grandchildren to grow up in.

“I am marching with you today because I believe science belongs to everyone,” Hazeltine said, “not just the privileged few.”

At 1 pm the crowd began their march through the streets of Spokane. Braley said she is frustrated with that lack of new legislation to combat climate change. Beatrice Harrison is upset with the changes happening in the U.S since the 2016 presidential election.

“Ever since Trump was elected, I can’t sleep at night. I wake up in the morning wondering what else he’s tweeted during the night,” Beatrice Harrison said. “And everything's he’s done, every move he makes is opposite of what I think needs to be done. So I feel like the citizens need to get out and protest every chance they get.”

“We love our outdoors, we love our clean air,” Braley said, “and we want it to stay that way.”

School of Rock, Waitress and return of Disney's The Lion King among 2018-19 Best of Broadway Spokane season

Speaking of March For Science , News