Washington state finds more rabid bats this spring, here's what to do if one touches you

More bats have tested positive for rabies in the month of May than in any other May for the past 20 years, and while it's only a handful so far, Washington state health officials are taking the chance to remind people how to avoid bats, and what to do if you come in contact with one.

It's estimated less than 1 percent of bats carry the disease, which is fatal to people and pets in nearly all cases if left untreated, reports the Spokane Regional Health District. But the percentage of bats tested (a few hundred a year) that carry rabies is higher, between 3 percent and 10 percent.

Bats hibernate during the winter and are good for the environment and pest control, but they are the most common carriers of rabies in the Pacific Northwest, according to health officials.

Most of the time, people come into contact with a bat when it sneaks into their home through a window or opening or a pet brings it inside, the health district reports, and it's important to be careful if and when that happens, because you might not feel a scratch or bite from the bat.


So here's what to do, according to health officials:
“Prompt administration of this treatment is highly effective in preventing rabies following exposure," says SRHD Health Officer, Dr. Bob Lutz. “Although most bats are harmless and do not carry rabies, people should never handle live or dead bats. To protect yourself and your loved ones, your safest bet is to simply presume every bat is rabid.” 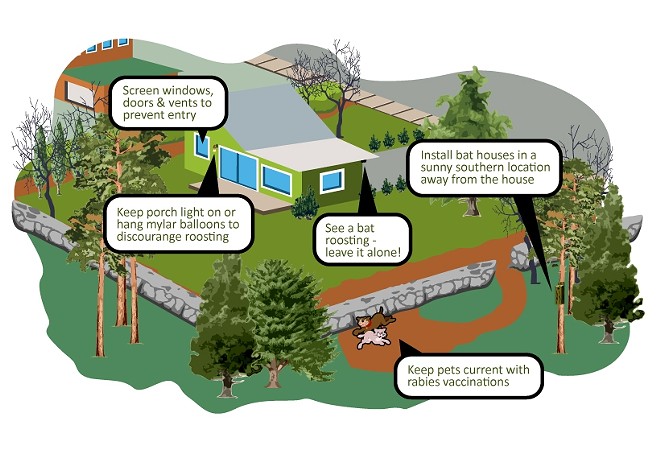 What does the Supreme Court's ruling on same-sex marriage discrimination mean for a Washington florist?

New details about possible Spokane Amazon warehouse, "Can Trump pardon himself?" and other morning headlines