The latest issue of the Inlander is hitting newsstands today. Find it at your local grocery store and hundreds of other locations; use this map to find a pickup point near you.  You can also read through the digital edition here.

HIGHLIGHTS
For a moment, it seemed as though we had escaped, that 2020 — a dumpster fire of a year — might actually spare us from WILDFIRES. Of course, that wishful thinking went up in flames on Labor Day when blazes exploded around the state, burning up hundreds of thousands of acres in a 24-hour period. Thankfully, though, as our reporter Samantha Wohlfeil reveals in this week’s cover story, experts have a pretty good idea of how we might mitigate what has become our unwanted fifth season of the year: the smoke season when we’re forced to huddle indoors and bungee-cord air filters to box fans. Find our special report in the latest edition of the Inlander.


• Staff reporter Daniel Walters dives into the unsolved 1987 murder of Spokane’s Sarah Gardner, whose granddaughter has returned to the city to become the City Council’s new communications director. “I’m like a phoenix rising from all of this,” she tells us. “I’m coming back to Spokane and picking up the torch from my grandmother.”

IS IT ENOUGH?
Washington lawmakers passed the Native American Voting Rights Act last year, but they couldn't have expected the pandemic and wildfires to come. MORE 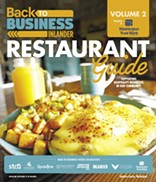 BACK TO BUSINESS
In the middle of this week’s issue, readers will find the second Restaurant Guide from Back to Business. Back to Business is part of a local marketing effort in support of Spokane County’s hospitality sector and was developed by the Inlander and a variety of partners. Find fresh deals, specials and updates from restaurants, shops and more here!