• NEWS: Councilman Mike Fagan (and other elected Republicans in Spokane) respond to controversial comments, plus NAACP Spokane chapter President Phil Tyler is stepping down, possibly to run for elected office.

• MUSIC: If you have the means, we highly recommend picking some up — our picks for Record Store Day releases.

• 4/20: It doesn't refer to a cop code for smoking marijuana in progress, and it's not Bob Marley's birthday. Here's the legit story behind the international signifier for all things marijuana.

• Are your tushies safe?
A headband-wearing Aeropostale-clad bro says he's the Spokane Spanker. Police have not yet arrested Jonathan Smith, who admitted to assaulting 30 to 50 women on the Centennial Trail over the course of three days. (KHQ) 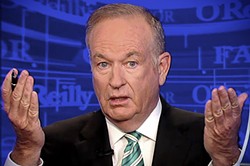 • Tragic end for runaway teen
A 17-year-old from Orofino, Idaho, died in a car crash yesterday on Sunny Side Bench Road. The boy, identified by police as Kristian Branden Perez, ran away from his prom Friday and was missing for days before he was found. Perez died the next day. (Spokesman-Review)

• "I don't mind if you boo or yell"
U.S. Rep. Raul Labrador held a three-hour town hall Wednesday in Meridian, Idaho, facing questions and criticism of President Donald Trump's administration. The forum was only scheduled to last 90 minutes, but Labrador continued to field questions about Trump's tax returns, the future of health care and the Environmental Protection Agency, and the president's frequent (and costly) visits to his Mar-a-Lago resort in Florida. (Idaho Statesman)