Daniel Walters photo
In his final meeting as Spokane NAACP president, Phil Tyler emcees a heated discussion about controversial statements local leaders made at a March 4 Trump rally.
Last night's NAACP meeting had been contentious, to say the least.

Most of the meeting had been an interrogation of City Councilman Mike Fagan and Spokane County Sheriff Ozzie Knezovich regarding comments they'd made about transgender rights and President Obama's impact on cop killings. There had been moments of anger and outrage and emotional confession. Long monologues had been delivered about deeply personal experiences. Comments had been made that infuriated those on the left, and comments had been made that had infuriated those on the right.

But as Spokane NAACP President Phil Tyler closes out the night, standing in front of the crowd in a sharp tuxedo with shiny shoes, he doesn't look upset. In fact, it's closer to the opposite. He's beaming.

"Tonight," Tyler says, "will be my final night leading this wonderful organization."

At first, he suggests that he's stepping down to set the stage for other leaders.

"They say you lift as you climb," he says. "I say sometimes, in order to lift, you have to not only reach down but step down."

He celebrates how the organization has grown and thrived.

"I am happy. You've made me happy," he says. "Continue to spread love."

There's applause. But then, like the post-credits scene in a Marvel movie, he drops a hint about what's coming next — a reveal that his motivation for stepping down may not entirely be about clearing the way for new leadership.

"I will add this final caveat," Tyler says. "Our bylaws expressly prohibit an officer holding a publicly elected office."

"(Wink)," Tyler has written in his notes.

Tyler had been rumored to be planning a run for mayor or City Council president for months. Today, he's still playing coy, still unwilling to say exactly which race he's looking at.

It's not the first time he's been interested in politics. In January and February of last year, Tyler applied for the city council seat left open by Jon Snyder. Ultimately, local attorney Breean Beggs was appointed to that seat instead.

Instead, over the next year, Tyler focused on his work at the NAACP. When president Naima Quarles-Burnley left Spokane, Tyler, the NAACP vice-chair, became chair.

So why step down now?

"I have a wedding to plan. I have a business I am trying to get back in and engage with," Tyler says. "I’ve also heard members of the community say, 'All the good work you're doing is good, Phil, but can you truly make the change you want to in the community in this position? ... Do you think you would be willing to make another run for public office?' I said, 'Huh. Wow. Maybe.'"

So is he going to run now? Probably, he says.

"I haven’t officially decided that I’m going to, but it is a major consideration," Tyler says.

He says he's considering running for City Council, mayor, even county commissioner. And if his friend and former colleague Knezovich decides to run for another office and there's an opening to run for sheriff? Then maybe he'd run for sheriff.

Tyler says that a big part of his time on the NAACP has been to "continue to rebrand and rebuild the organization after the unfortunate incident that keeps playing out with our community."

He doesn't say her name. He doesn't have to. At last night's meeting, the mere mention of the name "Rachel Dolezal" by Fagan sparked a chorus of boos and scoffing.

"Our previous president continues to gain airtime and attention, taking away from the good work we’ve done," Tyler says.

Dolezal continues to make headlines, riding her reputation — the white, former Spokane NAACP president who had claimed to be black — to a published memoir and book deal. Ever since the scandal broke in June 2015, Tyler has been trying to rebuild trust between the NAACP and community members.

"I knew that I had the skills of communication, and felt I had a calling to use them to help repair the damage done by the scandal that had impacted the organization," Tyler wrote in the December 2015 issue of the Black Lens.

Tyler's tactics were markedly different from those of Dolezal, who was quick to condemn problematic statements and lead marches against perceived wrongs.

Tyler has been more cautious. He received a flurry of messages about statements that had been made by Knezovich and Fagan at a March 4 Trump rally in Spokane Valley. Instead of sending out a letter condemning the statements, he invited them to speak before last night's NAACP meeting.

"This is not a name-clearing or a name-calling session. This is about true dialogue," Tyler said in a statement to open last night's meeting. "We, as NAACP Americans, pledge to disagree without being disagreeable."

That mindset has become a mission statement for Tyler.

Even in the midst of online flame wars, Tyler has taken a calmer approach. He called a Spokane County Sheriff's Deputy's controversial post about Black Lives Matter "distasteful" and unprofessional, but ended his comment with an olive branch.

"We can either help to improve police-community relations or be a part of dividing it," Tyler says. "It's your choice, my friend... and words do matter."

As both a former Spokane County's Sheriff's deputy and the current NAACP president, Tyler has tried to bridge the gap between the law enforcement and minority communities.

At times, Tyler's attempt to reach across the aisle has exposed him to criticism. Not everyone has been a fan of his decision to hold a "collaborative listening session" between U.S. Rep. Cathy McMorris Rodgers and local leaders.

"All you are doing is giving these people cover to make a case that they are not racists," one commenter posted on Tyler's Facebook page.

But he defended the session.

"Where we are with our nation today, it's imperative that we simply try to find some way to come together," Tyler said back then. "To restore the broken community and restore the broken nation. That's what I'm trying my best to do."

There are still plenty of things that Tyler says he hasn't accomplished during his time at the NAACP. He says he wished he could have brought "the broader communities of color in Spokane together," like the Sikh community. He says there has been an opportunity for the organization to help address disparities with minority kids being expelled or suspended at higher rates, by helping to mentor or support those kids.

But one issue he still sees? People of color are underrepresented in government. Maybe, he suggests, the best way to fix that is to run himself.

"We don’t have candidates out there running for the positions," Tyler says. "That was part of my decision. My mother would say, 'Stop, talking about it, boy, and be about it.' If you don’t think there’s enough color, put yourself out there."

Soon, he says, he probably will.


Tonight, will be my final night leading this wonderful organization.

I am stepping back from the presidency but not out of the organization.

As I have spoken with you before, there is never a perfect time for anything, but I am perfectly positioned to do so. We have, not only a strong group of amazing women and men on the Executive Committee, but we have all of you… the amazing men and women of our membership.

Look around. We have this beautifully diverse group of races, ethnicity, gender, religion, ideology… and most important, “passion.”

As the brother from the Allstate commercial would say, “You’re in good hands.”

With any organization, its leader is only as good as his/her followers. But you are not followers… you are family... and that bond is stronger. That bond you’ve allowed to create is one I shall not forget.

They say you lift as you climb. I say sometimes in order to lift, you have to not only reach down but step down. I do that tonight, and I want to help lift each and every one of you, and our community, to new heights.

We often come to this meeting and give applause to those standing in front and on the mic. Tonight, I give thanks and applause to you for making this organization what it is today and what it will be tomorrow. Thank you.

Lastly, I'm not going away. I will still be a member, just as you. I will be sitting and standing alongside you, as you've sat and stood alongside me. I thank you for the love you've shown. Mother Teresa said, "Spread love everywhere you go. Let no one ever come to you without leaving happier."

I am happy. You've made me happy. Continue to spread love.

I will add this final caveat... our bylaws expressly prohibit an officer holding a publicly elected office. (Wink.)

A handful of new restaurants, bars and tasting rooms on the way, or open now 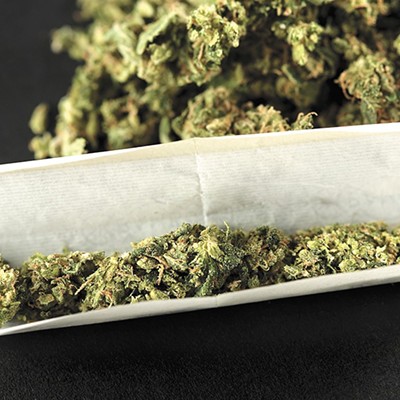