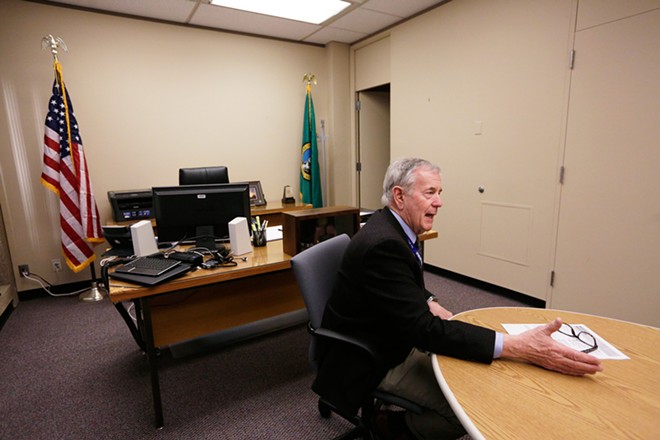 Young Kwak
Jim McDevitt during an interview with an Inlander reporter following the first week at the helm of the Spokane Police Department
Nearly 100 community members showed up Wednesday to express frustrations with Mayor David Condon and former U.S. Attorney Jim McDevitt surrounding the mayor's decision to appoint McDevitt as interim leader of the police department.

Fueling a majority of the discussion among the group gathered in the downtown Spokane Public Library was an editorial McDevitt wrote for the Spokesman-Review last year in which he indicated a high rate of violence and "single-parent homes" among African Americans determines how police interact with them. Condon says he became aware of the editorial while he was considering McDevitt for the four-month position.

Several people, of varying races and ethnicities, stood up to express concern.

"I'm reticent to accuse someone of being a racist or prejudiced, but in the op-ed, [McDevitt] prejudged an entire group," said Phil Tyler, vice president of the local chapter of the NAACP and former Spokane County deputy. "In our nation and in our municipal government, we are struggling with public discourse, and this op-ed was a further affront to public discourse."

Tyler and others spoke about being raised by single parents, which McDevitt, in the editorial, identified as a "hard truth that underlies extraordinarily high crime rates that plague young men of color."

Liz Moore, director of the Peace and Action Justice League of Spokane, also expressed frustration with the editorial, adding criticism of the mayor's decision not to consider input from the Police Leadership Advisory Committee (PLAC), the group tasked with coming up with qualifications for the next police chief.

"It really is a break in the trust that community members put into that process and the expectation that the city is going to take this seriously." she said. "It becomes very difficult to [encourage people] to engage and to feel credible doing that if their comments are not respected."

Both Condon and McDevitt stood and apologized to the satisfaction of some — but for others, the damage has already been done.

Mary Ann Murphy, the former chairwoman of the PLAC, says she appreciated McDevitt's acknowledgement that he is a beneficiary of white privilege, and called the discussion a "baby step in the right direction."

(Murphy resigned from the PLAC earlier this week over frustrations with McDevitt.)

Tyler, for his part, is looking forward.

"I have to respect everyone's opinions," he says. "And for a man to stand up and apologize ... to me that speaks volumes."

On the other hand, Kitara Johnson,a local activist who organized a "die-in" protest earlier this month, was not as quick to exonerate.

"I think it's the same conversation we've been having over and over," she says. "I want action, and I think McDevitt needs to specifically talk about how he's going to address bias."

Legislative special session, Trump news and other stories as you end your week