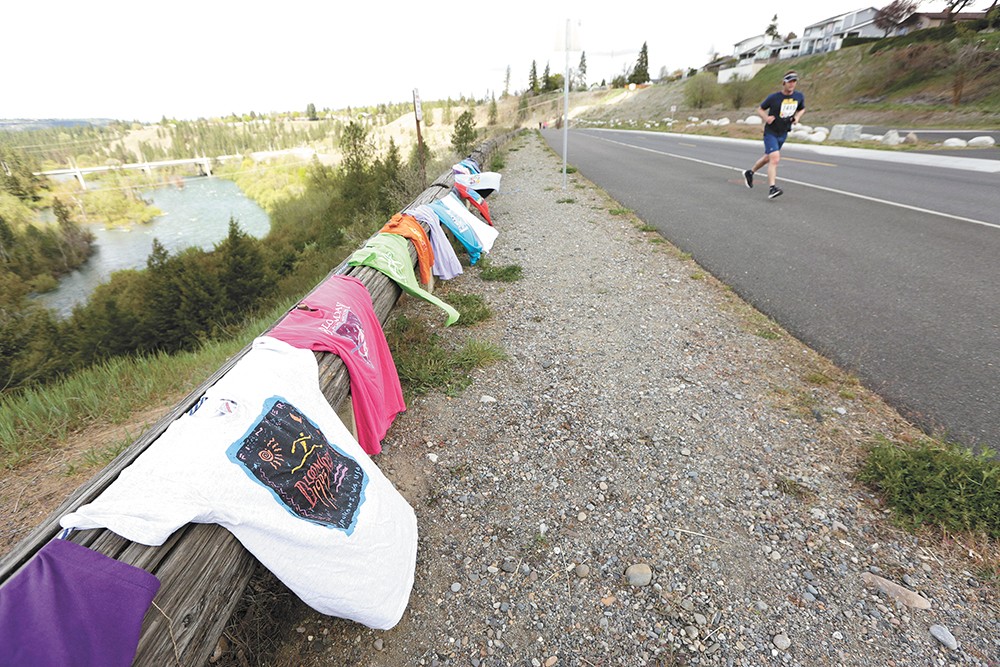 Young Kwak photo
T-shirts of past Bloomsdays past decorated the top of Doomsday Hill Sunday.

Of course, if you don't have thighs big enough to rub together when you walk 12 kilometers, chafing might not be an issue. But I'm not what you would call "in shape" or "physically fit," and the extra corona-pounds I've put on while under Washington's stay-home order meant there was no avoiding the chafing when I hit Riverside Avenue Sunday for an unofficial Bloomsday jaunt.

"Jaunt" might imply running, but rest assured, there was no running. Even during my high school athletic years, running for fun was not for me. Running was punishment for screwing up a play at basketball practice, for missing a cut-off man in baseball. The only running I would contemplate now as I approach 50 is running for my life, and even that would be done knowing my hamstring is more likely to explode than me successfully avoiding anything chasing me for food or sport.

No, my Bloomsday was done as a luxurious, if long, walk. And I thought I was prepared, maybe overly so. I had a Camelbak of water, a snack bag loaded with dried apricots and nut clusters, layers for fighting the 9 am chill, extra padding in my shoes, and some reporter tools: camera, notebook and a pen that exploded in my pocket around mile 2, eventually giving my hands the same hue as vibrant blue toilet cleaner. An ink-stained wretch was I, quite literally.

I did not, however, think of my thighs. And roughly four hours after I started my Sunday exploration of the course, I hopped in a hot shower. The water poured its way down to my rubbed-raw nether regions and gave me a stinging jolt that buzzed me awake.

"Is this pain really the satisfaction people feel when they finish a race?" I thought. "Sickos."

I've come to learn the revered place Bloomsday holds in the city's culture, but I never gave it much thought each spring. Last summer, though, my family moved into a house on Lindeke Street in West Central, unwittingly planting ourselves right on the Bloomsday route near the Mile 6 point of the 7.45-mile race. We quickly pegged May 3 as the perfect housewarming party date. Friends, mimosas, coffee and a little cheering for passing-by Bloomies on a spring morning — what could be better?

That plan, like so many this spring, was dashed by the coronavirus. Maybe it was the disappointment, or maybe it was the sheer madness of being cooped up in the house since early March, but I decided that since I couldn't play Bloomsday host, I'd instead go ahead and walk Bloomsday at its intended time, even if I had to do it by myself.

Of course, come Sunday morning, I was most certainly not by myself. The official Bloomsday might be rescheduled for Sept. 20, but you can't keep some Bloomies down. Even virgin Bloomies like me.

I dumped my car downtown and immediately wondered if I was going to freeze on this challenge. Standing in the shade as the wind ripped through the intersection of Monroe and Riverside around 9 am Sunday was not pleasant. But it was not enough to slow any of the other folks I noticed meeting up and taking off jogging.

I knew doing this unofficial Bloomsday would mean no bands along the way, no water stations or finisher's T-shirt at the end. But I didn't realize I would run into some of what Bloomsday is known for. Other "racers" nodded encouragement and said hello as they passed me by — even a Spokane Police Department car honked a cheer during the last mile, as did an SUV with a dinosaur sticking out of its sunroof.

There were even people lined up at some spots to cheer on the racers. Almost as quickly as I started, I paused to chat with Kathleen Dix, who was set up on Riverside with a cup of joe. She runs Bloomsday every year, ever since Don Kardong talked her into doing the first one, and she'd be doing it Sunday if all was normal.

"I've trained and everything!" Dix said. She opted to keep her social distance, instead taking the spot her 100-year-old mother normally does to catch the family's sweatshirts as they start running. She even wore her mother's "The Bloomsday Bag Lady" T-shirt.

I thanked the course designers as Riverside tilted downhill, excited to finally see where People's Park is for the first time, and bummed at the amount of litter along the otherwise beautiful road.

On Government Way, I was passed by all manner of senior citizens, young children and stroller-pushing young parents, but I felt pretty good going up Cemetery Hill. Up top, I met Marsha Thomas and Richard Geltsch, who've watched the race since moving to the neighborhood four years ago. They weren't sure anyone would be running Sunday, but when Geltsch stepped out on his deck in the morning, he immediately saw Bloomies in action, so they set up their chairs on the road near Life Center church and got to cheering.

"We usually can't go anywhere on Bloomsday," Thomas said. "This year we can, but we're staying here."

A couple miles later, after trudging up Doomsday Hill, I ran into Joe and Marilyn McManus, who'd hauled their Culligan water cooler from home to serve up cups to Bloomies. By 11 am, Joe said he'd seen about 400 runners and walkers go by, including some race luminaries they've gotten to know by taking part in Bloomsday every year.

That explains the appeal of Bloomsday, even an unofficial one. Sure, some people are running to win, or mark personal-best times. But for a lot of folks I met and saw on Sunday, it seemed a way to regain some sense of normalcy with their families during trying and strange times. Something they could do from a safe distance, but still be together. A celebration.

You don't need bands or T-shirts for that. ♦

The original print version of this article was headlined "Losing It"