A local chicken breeder explains why chickens can be your pets 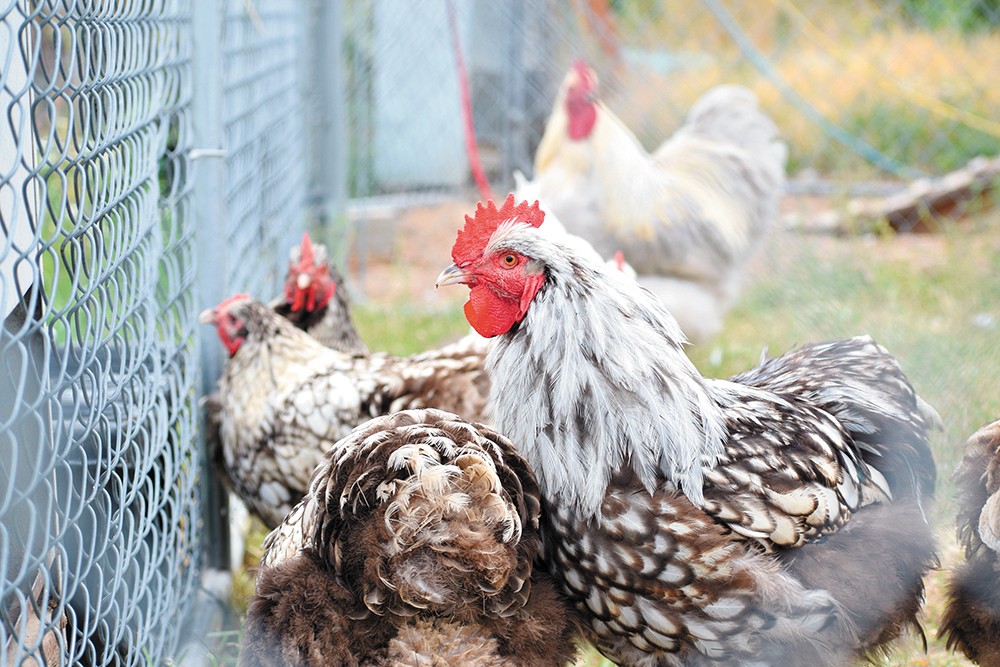 Linda Penning crouches in the dry grass and extends her hand toward the fence. The pen is spacious, with a board propped up on one side for some extra shade. As soon as her hand reaches the fence, a flock of chickens rushes up, peeping and chirping, as if to greet their mother.

"They're happy campers in there," Penning says.

A few steps away, there's another pen with more chickens. Roosters, meanwhile, follow her footsteps as she walks through the yard. Other chickens hide underneath a trailer to get out of the scorching July sun.

Penning has about 100 chickens here at Spring Leaf Farm, located about 15 minutes southwest of downtown Spokane. They're all separated by breed: There are Silver Laced Orpingtons, Blue Ameraucanas, Splash Copper Marans and more. Each breed dons its own colors — some a drab brown, and some a stunning combination of light gray and blue and black. These are rare, heritage breed chickens. Penning sells hundreds of them each year to owners who put the chickens in shows where they're judged on how closely they match their breed.

Others, however, she sells to folks who just want some chickens as pets.

"They definitely have their own personality," Penning says. "Every one of them is different."

Penning, 63, fell in love with chickens about 15 years ago, when her brother built a chicken coop for her. She incubated some chicken eggs, and when they hatched, she was hooked. All the chicks tugged at her heartstrings, imprinting on her like she was the mother. When she would go out back to garden, they'd follow her and start scratching in the dirt alongside her.

Penning's affinity for chickens has passed on to her niece, Sarah Buck, who owns about 15 chickens on roughly 20 acres of land near Cheney.

"I joke that I'm kind of like the crazy cat lady, but with chickens," Buck says.

Buck says she enjoyed having chickens as a teenager, leading her to want some of her own as an adult. Generally, she says they have a calming presence.

"It's kind of a meditative feeling to watch them picking at the ground," Buck says.

You don't have to have acres of land to have chickens. In the city of Spokane, you can own one chicken per 1,000 square feet of property. Owning one isn't as complicated as you might think, Buck says, and it's probably easier than a dog or a cat. You just need a chicken coop, waterers, a heater and some food. Then make sure the chickens are in a safe area.

These days, Penning doesn't get too attached to all of the chickens. But she does have some favorites. Especially Mr. Blue, a Lavender Ameraucana. He got his name because his breed's hens lay blue eggs.

Ever wonder what your cat's trying to tell you?