State Rep. Jenny Graham (R-Spokane) called me on my cellphone the day the Inlander published my story about her unwittingly linking to conspiracy theory posts on Facebook. I called her back immediately — while she was still leaving a voicemail — and was greeted with two blasts of profanity.

I tried to ask her for an explanation or a conversation about why she was angry, but the line was suddenly disconnected.

The voicemail message she'd left was just as angry but didn't elaborate on what, if anything, she felt the story got wrong. Instead, she issued a vague threat.

"Daniel, you lying piece of shit," she says on the voicemail. "You've done it. You have started it. Don't you ever call me again. Do you understand? Don't you ever — and you tell your buddies not to call me either. It's on. If you think for one minute you're going to pull this crap and you're going to walk away from it, you're nuts."

The voicemail message also includes a long stretch of silence — possibly caused by my phone call interrupting the recording — before Graham appears to repeat her admonition for me to never call her again.

Despite this, I tried to call her back again. I left a voicemail asking her to discuss what she believed the story got wrong. I sent a text message asking her for a discussion, off the record if she wished, about her concerns. My editor also attempted to call her the next morning, but was unable to leave a message because her voicemail box was full.  Weeks later, we still haven't heard back.

At times, when someone is unhappy with an article about them, they'll call or email me or my editor, explaining specifically what they felt was wrong about it. In the event we've made a factual error, we try to get it corrected as quickly as possible, sometimes within a few minutes.


But Graham never reached out to the Inlander or to me with any specific complaints. Instead, on her Facebook page that warns that "personal attacks/profanity will not be tolerated," she launched a barrage of personal attacks against me by name.

Across at least 15 separate Facebook posts and numerous Facebook comments, she publicly called me things like  "disgusting," "hateful" "sleazy" and a "lying piece of dung." She accused me of not caring about human suffering, of attacking human trafficking victims, and of "sacrificing real victims" to push "delusions and lies."

She wrote that she was looking for a lawyer to sue the Inlander. But even when asked directly by a former Spokane County GOP chair what was false about the article, Graham declined to point to any specific line in the story that was untrue.


It would be easy to double-check anything about the article she claimed was false against the record, in order to correct it if need be.

Everything I wrote about Graham is tied to something she posted — and I screenshotted — on Facebook or something she told me during a lengthy recorded interview.


For example, here's Graham's Facebook post about human trafficking, linking to a blog post at the site "Humans are Free." That blog post claims a significant number of hundreds of thousands of missing U.S. children end up being raped by demons in sex dungeons; speculates that some politicians oppose increased border security "because it would make their child trafficking operations more difficult and expensive"; includes a video titled "Are Democrats POSSESSED by DEMONS who hate humanity?"; and is featured on a site brimming with insane conspiracy theories about everything from 9/11 to reptilian-human hybrids.


And here's the post where Graham sent her followers to an article hosted on an anti-vaccine site called "Vaccine Impact." The site is rife with all sorts of misinformation, ranging from "Bill Gates' Plan to Use Invisible Ink to Tattoo Vaccination Status into Children's Skin" to a 9/11 conspiracy theorist's claim that figures at the "highest levels of government" are harvesting children’s blood before they are murdered as a sacrifice to Satan.

Doing our interview, I pointed out that this site appeared to be promoting elements of the QAnon conspiracy theory, a bizarre and dangerous conspiracy theory that claims Donald Trump is secretly battling a vast network of powerful Satanic cannibal sex traffickers.

Graham indicated she was unfamiliar with the conspiracy theory and was unaware of the fringe views on these sites, but reiterated that her underlying concerns were genuine.

"The trafficking is real, but sadly enough, Daniel — I'm going to put it out there too — so is the occult situation," Graham said. "Again, I'm talking about that because I have somebody that I'm very fond of and she was one of those kids that was abused as a child in a cult. They did terrible things to her. ... They hollowed out an animal — we're talking about them putting their hands over hers to stab somebody with."


Graham's passion on the issue of human trafficking is shaped by deeply personal experiences.

Graham's sister was murdered by the Green River Killer. Two years ago, when Graham was first running for office, I wrote a story about how Graham grappled with that loss, including her confrontation with her sister's killer and her own painful experience with child abuse.


But lately, many of the experts on sex trafficking have been concerned about the way that viral misinformation is spreading on the issue, hyping up imagery of stranger abductions and dungeons instead of the much more common ways that sex trafficking usually occurs.

Organizations dedicated to battling sex trafficking have also seen their movement hijacked by QAnon activists, and sex trafficking hotlines clogged with conspiracy theory claims. They've been accused of sex crimes themselves when they try to debunk the theories.

These organizations continue to stress how much all this misinformation hurts the victims they are trying to help.


But in her recent Facebook posts, Graham's repeatedly claimed, falsely, that the Inlander article was somehow arguing all child sex trafficking was a conspiracy theory. She also falsely claimed that I said that abductions don't happen. (Stranger abductions happen, I emphasized explicitly on Facebook messenger, but are very rare.) 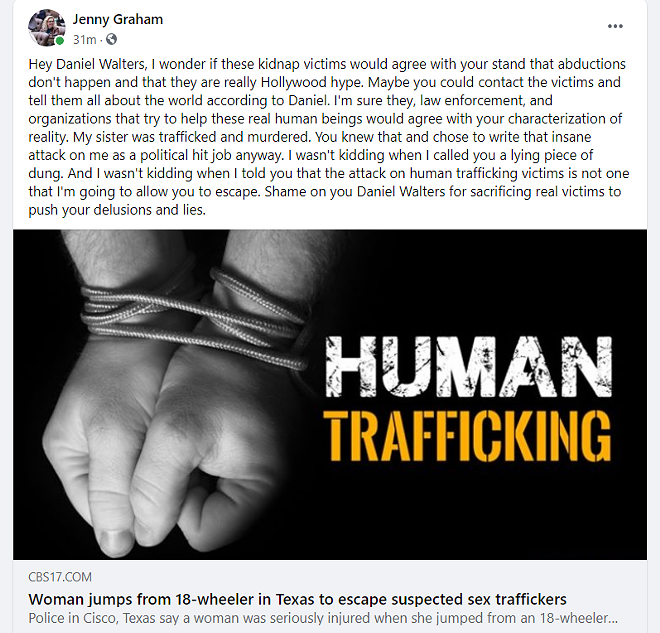 Facebook screenshot
One of many Facebook posts where Jenny Graham falsely accuses me of attacking human trafficking victims.

Graham appears to have misread other parts of the Inlander article as well.

"[You] lied through your teeth when you wrote that I said [hydroxychloroquine] was a 'cure' for COVID," Graham wrote in a Facebook post.

But that's not what I wrote. I wrote that, "in August, Graham objected to Facebook flagging a video as incorrect that argued that masks were ineffective and that the drug hydroxychloroquine cured coronavirus."

That's true. In late July, videos of a press conference from "America's Frontline Doctors" featured fringe doctor Stella Immanuel claiming that "You don’t need masks, there is a cure [for COVID-19] ... It is called hydroxychloroquine, zinc, and Zithromax."

Debunking bogus claims about coronavirus on social media can take just 30 seconds, according to this WSU method: Research Issue

The videos were shared by millions, including Graham, who accompanied the video with a comment on July 27 with a post arguing that "you deserve to have all points of view to make choices best for your health and safety."

These videos were swiftly removed by Facebook, YouTube and Twitter. Facebook also began flagging posts on the issue with a fact-check from "Science Feedback" noting that "Hydroxychloroquine has shown no curative or preventative effects in patients with COVID-19" and that that it was "incorrect" to say that masks were ineffective in combating the virus.


In an Aug. 3 post, Graham shared a screenshot of this warning label and voiced her strenuous objections to the fact-checkers.

"Who is fact-checking the fact-checkers?" she wrote. "Who determines that individuals who say their lives were saved by the drug are lying?"

Trolls, conspiracy theorists, hoaxers and Trump have twisted Facebook, YouTube and the news to toxic levels - and it's only getting worse


in one of her recent attacks against me, Graham again targeted Facebook's fact-checkers. On Aug. 29, she linked to an article titled "Zuckerberg, Facebook & Three 'Fact-Checkers' Sued for Government Sponsored Censorship" on a site called Collective Evolution.

"I have asked who is fact-checking the fact-checkers for a good reason. I will continue to do so. In fact, there should be an investigation to answer a long list of reasonable questions," Graham wrote above the post. "You picked the wrong target to intimidate or silence. This one fights back."

Yet this post is the perfect illustration of why the Inlander published our original story.

The article Graham linked to is about Children’s Health Defense — a group aligned with the biggest buyers of anti-vaccine advertising on Facebook — trying to sue Facebook and fact-checking organizations like Politifact for warning users that the anti-vaccine information the Children's Health Defense was sharing on the site was false.

While other observers have called the lawsuit "insanely stupid," the site Graham linked to, Collective Evolution, is much more sympathetic to the suit because their own articles frequently get flagged by Facebook.

Collective Evolution is another fringe site, brimming with posts about conspiracy theories about everything from QAnon, the Illuminati, 9/11, chemtrails, Wayfair furniture sales, COVID-19 and, yes, reptilian-human hybrids.

KHQ's conspiracy-laden chemtrails story is false balance at its worst


That doesn't mean that Graham believes any of those theories. She mocked the reptilian conspiracy theory recently. Nevertheless, her links highlight a challenge that journalists increasingly have to grapple with: Politicians who condemn mainstream news outlets, fact-checkers and local reporters, while also credulously sending their followers to check out sites brimming with dangerous falsehoods.

Still, Graham has challenged the Inlander to "release the recording" of my interview with her.
As a show of good faith, we're taking that rare step and posting the entire interview here.

During the 78-minute interview, I press Graham on a wide variety of issues, including her comment that "masks can hide taped mouths," the fact that the scientific evidence clearly shows that vaccines don't cause autism and whether, by linking to conspiracy theory sites, she risked sending her followers down dangerous rabbit holes.

"Absolutely not," Graham told me. "My posts are more to say, 'This is an issue that is coming up.' I'm not telling people to think one way or another about something. These are important issues that I like to get feedback [on] from people in my district."