No, Spokane's mumps outbreak is not proof that vaccines don't work 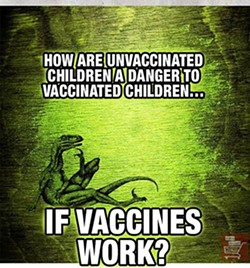 Because a small percentage don't work, but you're still more likely to get mumps without a vaccine
Today, the Spokane Regional Health District announced that 44 people in Spokane have mumps, in what SRHD spokeswoman Kim Papich tells the Inlander may be Spokane's worst mumps outbreak in "decades."

But some anti-vaxxers are clinging to the fact that out of the 44 people with mumps, at least 27 actually were vaccinated.

These are questions that can be explained. For starters, nobody is saying that the MMR vaccine works 100 percent of the time. In fact, the vaccine is around 88 percent effective. Still, a person who has received the vaccine is about nine times less likely to get mumps than an unvaccinated person exposed the same virus, according to the health district.

Put another way, that means you're still more likely to get mumps if you're unvaccinated.

Consider this example from the Centers for Disease Control and Prevention: Say there are 1,000 people in a community. Most (95 percent) of those people are vaccinated, but 50 are not. The virus attacks only 3 percent of the 950 people who were vaccinated, but 30 percent of the 50 people who are not. In this scenario, 44 people got sick during the outbreak (it's just a coincidence that the CDC used 44 as the total number of infected people). The unvaccinated people were far more likely to be infected by the virus, yet there would be fewer unvaccinated people with the virus (15) than vaccinated people with the disease (29).

This is not a direct comparison to Spokane's latest outbreak and the 44 current cases, in which eight people were unvaccinated. The health district does not know whether or not nine people were vaccinated or not. But the point that health officials have been trying to explain is this: The fact that vaccinated people have the mumps virus should not be interpreted, on its own, as evidence that the vaccine does not work.

Of course, public health officials have been trying to explain this for a while now, and many people remain unconvinced. Let the debate rage on.