KHQ's conspiracy-laden chemtrails story is false balance at its worst

It's a "sweeps" period for local TV news stations, which sometimes means we get top-shelf investigatory journalism. Other times, we get stories like this one from KHQ. 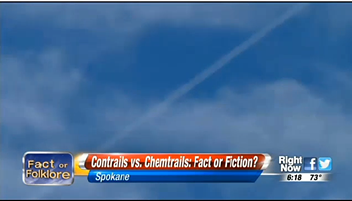 KHQ Local News
Fiction.
"Victor Correa researched the topic, talked with some experts, and he has both sides of the stories," anchor Dan Kleckner begins.

That's the first problem. This isn't an issue where there are truly "both sides." There's a factual question here — are planes secretly spraying harmful chemicals onto unsuspecting civilians below? — that has a true-false answer. (And all the actual experts say "false.")

It's a problem that media critics call "false balance." It comes up with GMOs, climate change, vaccines, creation science, and other issues, where the vast majority of scientists believe one thing, but media outlets give equal time to "both sides," calling the issue a "controversy."

(Watch this Last Week Tonight clip to get an idea of how absurd that can be.)

"It's an issue raised by people who have genuine concerns, but are often labeled as 'crazy' or 'conspiracy theorists' and tonight we've given them an opportunity to voice their concerns," Correa says. "Some say it's simply exhaust from airplanes, but others, like Brian Sawyer of Spokane, say it's much worse."

That "some," of course, is essentially the entire scientific community, including the Air Force, NASA scientists and the EPA. But Correa never mentions the massive weight of expert testimony against chemtrail conspiracies.

In fact, the KHQ report is even worse than false balance. It gives the bulk of the story over to the chemtrail conspiracy theorists. Correa interviews two chemtrail theorists, and only interviews an actual expert (a local meteorologist) two-thirds into the story.

And the web version of the story ends this way:


"Regardless of what [Meteorologist John] Livingston says, those who believe otherwise say, 'discover the answers for yourself.'

"I'm not trying to convince anybody of anything...I say just do the research," says Sawyer.

The problem with encouraging people to do research — KHQ illustrates "research" with video of fingers typing at a keyboard — is that Google is particularly awful when it comes to curating reliable information on health, science and conspiracies. Quack remedy lists and sketchy conspiracy blogs tend to rise to the top of the search results because of the sheer amount of interaction surrounding them. Entire communities spring up about conspiracies, and it's easy for some people to tumble down the rabbit hole.  The Internet tends to blur the reliability of sources — one blog or forum can seem as trustworthy as the another — and people can easily learn very wrong things very quickly.

The Inlander has waded into the chemtrail debate before. We listed chemtrail conspiracy theories in the syndicated "Project Censored" series in 2011. But the article did so with a heavy dose of skepticism: "This one stretches credulity, and it’s probably the best example of why Project Censored has gained detractors even on the left in recent years," it began.

Our article also noted that the chemtrail claims relied partly on an unnamed pilot in an online comment — not exactly a reliable source — and that "Project Censored seems to conflate ... a fringe obsession with supposedly suspicious airplane contrails."

More recently, I criticized the Coeur d'Alene Press for publishing over 3,000 words of chemtrail conspiracies from weather columnist Cliff Harris.

To give you an idea of how skeptical you should be of claims of chemtrail theorists, Harris quoted climate scientist David Keith as saying, “The U.S. and many NATO countries are spraying in order to save the planet from runaway global warming.”

But when I checked with Keith, he said he never said anything close. The quote, he said, was likely a pure fabrication.

"To the extent that you open up pages to unvetted, unverified information, you actually detract from dialogue in the community,” Kelly McBride, with the Poynter Institute, told me.

KHQ promises a lot more to come this week in their "Fact or Folklore" series.

"Now, chemtrails was just the beginning of our series his week," Correa says in the broadcast. "Tomorrow, Caitlin Rearden will take us into the woods, to see if we can uncover the truth of Sasquatch. Reporting in Spokane, I'm Victor Correa, KHQ Local News."