How movies and TV shows boost a conspiracy-minded "rigged!" mentality 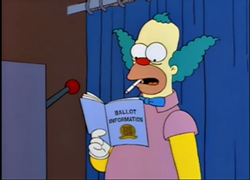 The Simpsons
You say the election can't be rigged against Trump, but then how come the Springfield election was rigged against Sideshow Bob opponent Joe Quimby? Huh? Didn't think about that, didja?
The big headline made by the debate last night, beyond the claim that nobody respects nasty women more than Donald Trump, was that Trump would not promise to concede the election if — and let's be honest, probably when — he loses.

No spoilers, the TV showman promises. You'll have to wait for the series finale to see what zany stuff he'll do if he loses.

This, of course, comes after more of of Trump claiming that the election was "rigged." And while surrogates have tried to explain that, now, now, he's just talking about media bias, Trump himself has come out to say, no, no, he's actually talking about rigging happening at the polling places.

It's turned into a blame game between liberal and conservative pundits, with many arguing that a presidential candidate making claims that the election would be rigged before the election is unprecedented, and many conservatives citing the Diebold voter machine conspiracies in 2004 and noting that Al Gore did not exactly concede immediately after the razor-tight 2000 election.

In some ways, this is the extension of the long debate over voter fraud, where the contention that voter fraud is essentially non-existent butts up against the argument that illegal non-citizen votes may have given us the Affordable Care Act.

But it's a mistake just to look at your Infowars and your World Nets Daily when it comes to understanding why so many people buy into the notion of , despite its incredible implausibility.  Instead, look to the same tool that created Trump, grew him, and nourished him: Television.

On the great sixth season Simpsons episode, celebrity-turned-felon Sideshow Bob  beats Mayor Joe Quimby in the Springfield mayoral election. Or at least, that's how it seemed.  Intrepid 8-year-old Lisa Simpson discovers that, in fact, the ballot boxes were stuffed with dead voters. Rigged!

Meanwhile, on the less-than-great Season 20 "Treehouse of Horror" episode of The Simpsons, Homer tries to vote for Barack Obama, but the electronic voting machine stubbornly counts his vote as a vote for John McCain. In other words, it's almost exactly the sort of scenario that Trump surrogate Jeffrey Lord was ranting about on CNN. Rigged!

And it's not just comedy. On the second season of Shonda Rhimes' breathless showcase Scandal, it's revealed that President Fitz was only elected because of rigged voting machines. And our hero, Kerry Washington's Olivia Pope, helped pull it off, without the knowledge of Fitz, her secret lover. Scandal! Also: Rigged!

Twelve Colonies Vice President Gaius Baltar had a pretty big lead over President Laura Roslin on Battlestar Galactica. But when the Zephyr  ballots are counted, Roslin pulls ahead, taking the lead over the Cylon-manipulated Baltar. Turns out, they had a plan. Col. Saul Tigh had helped replace a ballot box with a stuffed one in order to make Roslin president. Rigged!

It happens in movies too. In Man of the Year Robin Williams plays a comedian who hosts a Daily Show-style TV if the Daily Show consisted of hacky Jay Leno-level comedy. He runs for president as a and then ends up accidentally winning. Or did he?

There are plenty of other examples of course. TV Tropes has a whole "Vote Early, Vote Often" section dedicated to ballot-stuffing plotlines.

Conspiracy theories are common in fiction, and for good reason: Real life tends to be messy, random and pointless. Fiction tries to give it order. It raises up villains for heroes to defeat. It tries to imbue the mundane with meaning.

So in the Da Vinci Code, the Catholic Church has assassins carrying out a cover-up stretching back two millennia. So on 24, terrorist acts are sometimes an inside job, sometimes carried out by the president, other times by the vice president. So in Captain America: Winter Soldier, the agency fighting the bad guys turns out to be filled with bad guys themselves.

Heck, Oliver Stone's JFK was based on actual events, which it twists and prods and squeezes in order to make into a conspiracy thriller.

By contrast, how many conspiracy theories in movies turn out to be completely baseless? Occasionally, you'll get a conspiracy loon character used as relief, but, like, half the time they turn out to be partially right about things.

TV is TV, movies are movies and fiction is fiction. But the ideas in fiction have their way of worming into our perception of reality.

Most people don't wake up automatically buying Alex Jones' conspiratorial rants about how the government is poisoning water to turn frogs gay. We have to be primed by the culture around us.

In his book, The United States of Paranoia: A Conspiracy Theory, Reason's Jesse Walker describes how during the 1970s, real and fictional storylines worked in tandem to heighten paranoia. Genuine conspiracies like Watergate whetted the culture appetite for a spate of conspiracy thrillers, which in turn drove a conspiratorial mindset in the public.

There are conspiracies. There are cover-ups. But in real they're rarely so vast as they're made out to be in fiction. These days, corruption rarely happens at the ballot box. It happens behind closed doors. It happens when deals are made and then scrambled to be covered up.

They happen in small towns like Bell, California, where, until the LA Times stumbled upon it, a city manager was paying himself nearly $1.5 million in salary.

In other words, conspiracies rarely happen when everybody's paying attention. They tend to happen when no one is.