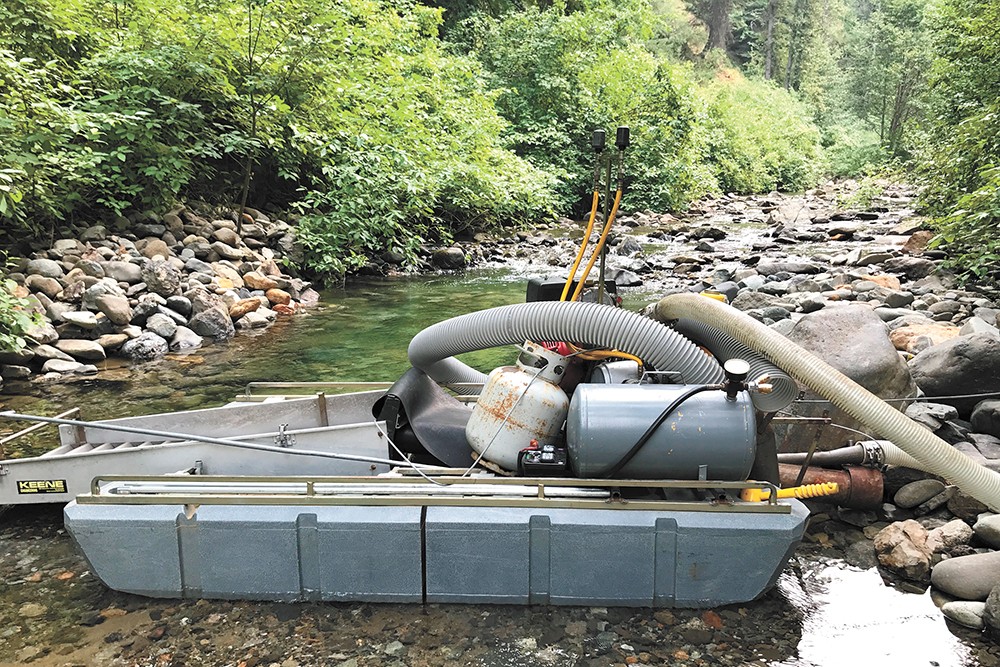 Despite spending millions of dollars each year on restoring and improving habitat for salmon and other endangered fish species, Washington state allows recreational miners to vacuum up water and riverbed sediment as they mine for gold and other metals, much to the astonishment of environmental groups.

After pushing to change that for the last several years, a coalition being led by Trout Unlimited hopes that the Legislature will pass a bill this year to block motorized suction dredging in areas critical for endangered fish.

The concern is that suction dredge mining can cause erosion, movement of heavy metals such as mercury, destruction of habitat, and impacts to fish eggs and juvenile fish, which is of particular concern to the coalition of more than 160 businesses, nonprofits, tribes and other organizations that back the legislation.

"Without these laws on the books, we're effectively playing a game of Russian roulette with our critical salmon and steelhead populations and we're undermining our enormous taxpayer investment in Washington's water quality and fish habitat restoration," says Crystal Elliot, Washington habitat director for Trout Unlimited, the conservation-geared nonprofit leading the statewide coalition.

House Bill 1261 would ban gas-powered suction dredge mining in areas that the Endangered Species Act designates as critical habitat for threatened or endangered salmon, steelhead and bull trout. First introduced in 2019, the bill passed the House 60 to 35 last week (with three excused) and moved to the Senate. The vote among Spokane-area representatives was split down party lines, with Democrats in support and Republicans opposed.

The legislation emphasizes that the state Department of Ecology has authority via the Clean Water Act to restrict the discharge of sediment into waterways, as happens during dredge mining, explains Kim McDonald, an environmentalist who founded the organization Fish Not Gold and who has worked for years to ban the practice.

If passed in the Senate, the legislation would bring Washington into line with other Western states that in recent years have banned or severely restricted the recreational sucking up of river sediments in hopes of finding valuable gold, silver and other minerals.

The practice is common in Sullivan Creek and Harvey Creek in Pend Oreille County, Sheep Creek in Stevens County, and the mainstem Columbia River above the dams, Elliot says. It's also popular across the Cascade region, closer to Yakima, Ellensburg and Wenatchee, according to the state.

"Fish and Wildlife prohibits fishing in some critical habitat areas ... and then ridiculously allows suction dredge mining to occur in these same waters."

Sierra Club's Washington chapter points out that Washington remains the only Western state not to effectively regulate the practice, despite heavily regulating how people fish.

"The Department of Fish and Wildlife prohibits fishing in some critical habitat areas (which we support) and then ridiculously allows suction dredge mining to occur in these same waters," writes Jesse Piedfort, Washington's Sierra Club director, in a post on the club's website.

Suction dredging is prohibited or strictly permitted in California, Oregon, Idaho and Montana, with the U.S. Supreme Court declining last spring to hear a challenge to Oregon's prohibition on suction dredging in streams that are critical for salmon, effectively leaving the rule in place.

"We have spent years working to raise awareness of this outdated practice that destroys sensitive habitat to benefit a small number of hobbyist miners," says Robert de los Angeles, chairman of the Snoqualmie Tribe, in a news release. "It is extremely gratifying to see that our state leaders are listening and embracing policies that are more consistent with all of our neighboring states."

Meanwhile, those other nearby bans could increase the popularity of recreational dredging in Washington, which is partly why environmental groups say it's important to pass legislation this year.

Indeed, that's why the Department of Fish and Wildlife cited the need for miners to get "hydraulic project approval" starting last year. Since Nov. 1, 2019, Washington's Fish and Wildlife Commission has required recreational users to get approval before mining in the state's waterways, rather than just requiring they follow the rules as laid out in the "Gold and Fish" pamphlet.

"With the number of mineral prospectors in Washington expected to increase, it is important for us to be able to more accurately assess potential risks to fish and the spread of aquatic invasive species," says Randi Thurston, protection division manager at WDFW, in a June 2019 news release about the changes.

"It does not change where or when the mining can occur," she says.

HB 1261 would change that and override the recent WDFW rules, putting the onus on Ecology.

"There's been this very gray area, where you read the 'Gold and Fish' pamphlet and it says, 'OK miners, you need to comply with all these various rules and regulations'... [and] all these hoops they were supposedly supposed to jump through," Elliot says. "But nobody ever did, and nobody enforced that."

Elliot and McDonald both note that even if the new legislation becomes law, it won't eliminate dredge mining in areas that aren't critical for endangered species, and forms of mining that don't require a motor will still be allowed in critical areas.

While a version of the current legislation passed the Senate last year, neither Elliot nor McDonald, who've worked to limit suction mining for years, are counting their chickens just yet.

"Let's just say I started off doing this when I was really young and I'm really old now," McDonald says with a laugh. ♦