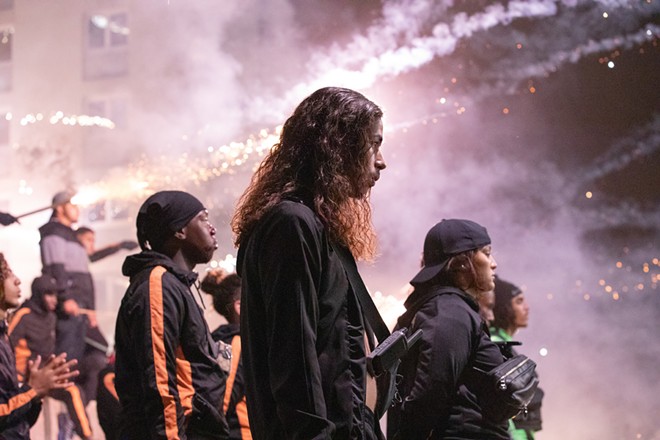 In 2012, French filmmaker Romain Gavras created a music video for Kanye West and Jay-Z's "No Church in the Wild." Capturing scenes of clashes between police and protesters, it now plays as a precursor of sorts to his latest film, Athena. The feature places us on the ground in the aftermath of a brutal killing of Idir, the youngest of four brothers. The death sparks explosive protests in a French neighborhood. It is a film that thrives on its presentation even as it frequently falls short conveying what it is trying to say about the spectacle that unfolds before us.

The story observes the three remaining brothers of Idir navigating the fallout of his killing in their own ways, often butting heads about what to do. The middle brother Abdel, played by Dali Benssalah (who recently appeared in No Time To Die), places his faith in the police to investigate the incident by acting as an intermediary. Opposite him, the youngest brother Karim, played by newcomer Sami Slimane, leads the uprising in the hopes of pushing the police to bring forth his brother's murders. Then there is the oldest brother, Moktar, played by veteran actor Ouassini Embarek, who is more motivated by opportunism. The intensity of their emotions is what unites them, even as they are increasingly driven apart as people.

What makes the film a standout is just how fluidly it captures the evolving escalations that befall them. The camera is rarely static, following characters in an almost balletic dance amid the brutality. This begins from the very opening moments, when the film throws us into a press conference at a police station that is disrupted by a hurled Molotov cocktail. We then follow Karim with a one-shot as he methodically makes his way through the subsequent fighting, driven by a grieving rage that has hardened into a cold determination. While this is not the sole sequence that avoids cutting (or is very good at disguising it), it is the best of them all for just how complex it is. Even as one may be tempted to compare it to a film like 1917 due to their shared extended action, a more apt reference point would be to a work like 2015's Victoria. While that is fully continuous and Athena is not, each arrives at a similarly grounded destination.

What frequently shatters the impact of the film's sequences are the repeated interjections of news broadcasts and phone calls that also muddy the narrative waters. It is clear they are meant to establish the potential futility of this fight, but they do so in a manner that is rather forced. Whereas most everything else was communicated visually via dynamic direction, these asides jam in exposition that often rob the film of its bite. Without tipping off exactly what they reveal, it is both underdeveloped and out of step with the realities of the world that Gavras had set out to grapple with. It holds back a good film from being a great one — a tragedy in its own right.

What holds it together is that the characters — while swept up in the chaos — never get lost in all of this. Karim has had to become wise beyond his years as the tragedy has thrust a greater responsibility on him. Seeing him become a general of urban combat is as mesmerizing as it is maddening that he has had to take that path. The beauty of seeing the flurry of weaponized fireworks as the day turns to night is stunning to behold though increasingly somber as there is a looming sense of dread that this may all come to naught. One speech Karim gives to rally his fellow rebels is gripping yet grim, as we can feel everything threatening to fall apart. The use of an operatic score sets the stage for these sequences to draw you in while also instilling everything with a grander sense of timelessness, feeling almost akin to a fable. Even with its regrettable missteps, there is something arresting and enduring to Athena's experience that still emerges. ♦

The original print version of this article was headlined "Gritty Grandeur"