Erick Doxey photo
BaLonely isn't sorry for their new album, but Norman Robbins (center) thanks you for listening to it.

Nothing gold can stay. Friends come and go. Work can be upended at any moment. Weather patterns shift. Little about our environments are ever truly static, and living in tumultuous times makes things feel even more precarious.

Those messy feelings are explored on Thank You, I'm Sorry, the new album from Spokane indie rock quintet BaLonely (which drops on June 3). Led by Norman Robbins on lead vocals and guitar, the group — Alex Smith (guitar), Adam Smith (guitar, keys), Cody Brooks (drums) and Kristen Robbins (bass, Norman's mom) — plays a shapeshifting brand of indie rock throughout the record. The album opens with the mellow wailing guitars of "No One Told Me (Pt. 1)," but soon songs pop up with low-key disco vibes ("Where People Go"), the slacker hoedown picking ("Tell Me Where I'm From") and somber downbeat singer-songwriter feels ("I'm Not Ready to Have a Baby," "Thank You, I'm Sorry"). All the while, Robbins lyrically reflects on growing up, relationships growing distant and searching for a place to belong.

Thank You, I'm Sorry felt like a new process for BaLonely thanks to the combination of pandemic pace and homespun recording (much of the album was recorded in Norman's basement, but he also opened a recording studio during the record's creation). While the band started the album in spring 2020, it was still tweaked and tinkered with for a year and a half.

"We felt like we had so much time with everything being shut down. It definitely created this new perspective on going about making [an album], because I didn't feel rushed in any way," Norman says. "And from that, I was able to be a little more honest with myself. Just take the time to make something that felt not so forced. Because in the past, we recorded the whole record in a matter of days."

"Our last record, I had his whole concept for it. And I felt like I knew exactly what I wanted," he says. "And this one was definitely a little more like, going into it not knowing what's going to happen next, and also taking the time to let whatever happened happened."

"It was interesting, because [I was] listening to it front to back for the first time, like two years after we had started writing it," Norman adds. "And like I never really paid much attention to the lyrics as a whole, but there really is a common theme of departure and leaving things and changing. It's cool to see that naturally happen without me really putting much thought into it." 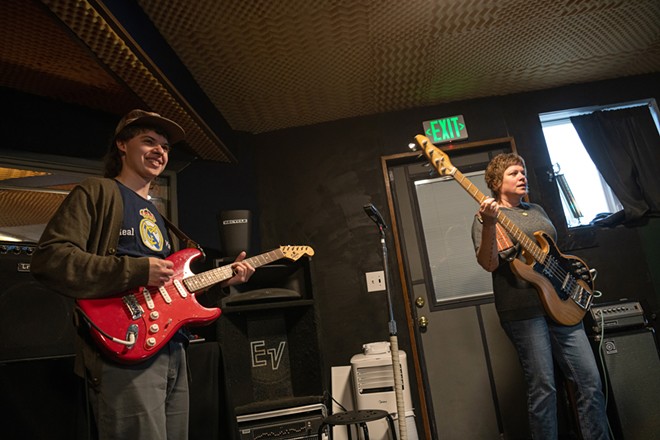 Erick Doxey photo
For Norman and Kristen Robbins, BaLonely is a family band.

Norman Robbins' musical reach in Spokane extends well beyond BaLonely. Along with Luis Mota, he runs the Palimpsest Group (TPG). A sort of catch-all organization, TPG has its own recording studio, organizes concerts, runs an internet radio station at TPGradio.com, shoots live video for bands, and more.

"When we started working together, mainly we were only working on the band.Then we sort of, when everything shut down, we started doing livestreaming projects together. And after that, the studio popped up and we moved in there," Norman says. "The whole theme along the way has been to create a spark for musicians. When we run into a musician in public who is maybe looking for something to do and hasn't done anything before, or somebody who's just looking to be creative in some way, it's always very exciting because we have all these things that are going on that we want them to be a part of."

"The radio station is a good example, because we're running on a schedule. And musicians kind of need deadlines to feel inspired to do things," Norman continues. "With what little energy we can push being as small of an operation as we are, it definitely creates waves and the momentum sort of builds up."

Bringing divergent strains of the Spokane music scene together continues with BaLonely's album release show for Thank You, I'm Sorry at Lucky You Lounge on June 10. Beyond BaLonely's genre-shifting sounds, there will also be Fun Ladies' frenetic rock, queer punk from Lip Sick, and the ambient warm-up vibes via Virusbytes. For Norman a huge part of everything he's doing to bolster the Spokane music scene boils down to not having the mindset of being an afterthought.

"All we're trying to do is stir the pot up a little bit and get some energy going," Norman says. "Just really get musicians to not feel like they're a joke. I never really take anything too seriously, but I suffer from not taking myself seriously enough sometimes. And I think a lot of other artists do the same thing. So we just want to be that sort of inspiration for people." ♦