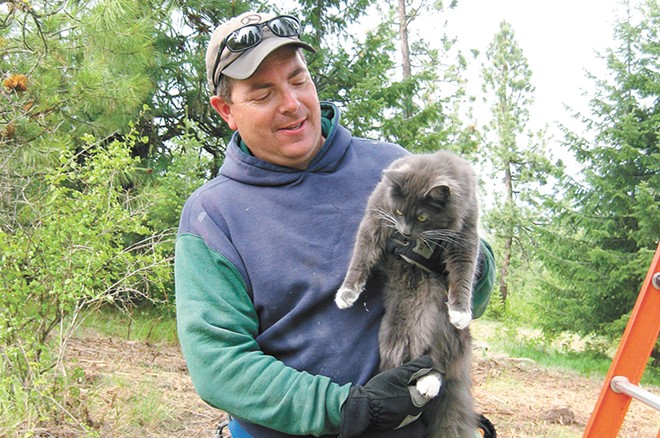 Picture this idealistic kiddie cartoon scenario: The local fire department rushes out in a cherry red ladder truck, sirens blaring, to heroically rescue a mewling kitten stuck high up in a tree.

Here in the Inland Northwest, it's a man named Jim Thoen — not the fire department — who'll show up, climbing gear in tow, to scale up a tree trunk and bring a distressed feline safely back to solid ground.

Thoen, who owns Rescue Northwest, a local venture that mostly trains and sells equipment to local rescue groups and first responders, says he's rescued 84 cats in the past 10 years since first offering his "cat in a tree" service. Thoen also happens to be a firefighter with Spokane Fire District 9 and is an expert in rope rescues, a skill that led him to start saving stuck cats.

"I started researching tree climbing techniques after the [fire department's] fourth people rescue from a tree," Thoen recalls. "Then in one week, two people called and asked if I could get their cats down."

For $150, Thoen will attempt to rescue a wayward cat within the Spokane area (traveling farther for extra), but won't charge if he can't get the cat down, which has happened a few times. He advises cat owners to wait at least a couple days before calling him, because sometimes height-seeking felines figure out how to get down on their own.

To reach his rescue objective, Thoen uses ropes and sometimes climbing spikes. After grabbing the cat, he puts the animal into a mesh bag for safety, and lowers it down via rope to its anxious owner before descending himself.

Most rescues are pretty uneventful; maybe a couple scratches or some unhappy struggling, but Thoen thinks most of the cats are quite relieved to see him and desperate to get down. A handful of rescues make for great party stories, like the time one of his charges was so high up in the top of a pine — more than 90 feet — that he couldn't safely climb any further to reach it.

Perhaps seeing that it, too, was out of favorable options, the cat in this instance suddenly took a flying leap and, Thoen says, miraculously landed on all fours with no immediately apparent injuries from the fall.

Another time, Thoen saved a South Hill family's cat by shaking a branch — it was too far out on an unstable limb to reach — while the family of four stood below with a blanket stretched between them, ready to catch their pet as it fell. They'd all agreed to this scenario as a last-resort method, he says, and the plan worked.

"Most [owners] are pretty thankful and for a lot of them, the cat has been missing for several days," he says.

Most cats get stuck in the first place, Thoen suspects, because something has scared or chased them up a tree, versus a curious sense of adventure. A lot of his rescues involve indoor-only cats that have gotten out on accident, and thus may be less experienced climbers.

While cats are quite good at climbing up things, they're not well-equipped to climb down from something like a tree because of the direction their claws curve. They also prefer to jump down, which isn't always an option at greater heights.

Ironically, Thoen admits he's not the feline species' biggest fan, yet is happy to help when all other options fail.

"It's been a lot of fun. I don't do it for the money — all I need is a little bit of specialized equipment for climbing, and insurance. Other than that, I get the experience of solving people's problems." ♦

Your guide to dog parks of the Inland Northwest

You submitted, you voted: Now meet the adorable winners of the 2019 Inlander Pet Photo Contest!

Pet obesity in the U.S. is on the rise. Local veterinarians share why it's important to keep your furry friends from overindulging

A local chicken breeder explains why chickens can be your pets