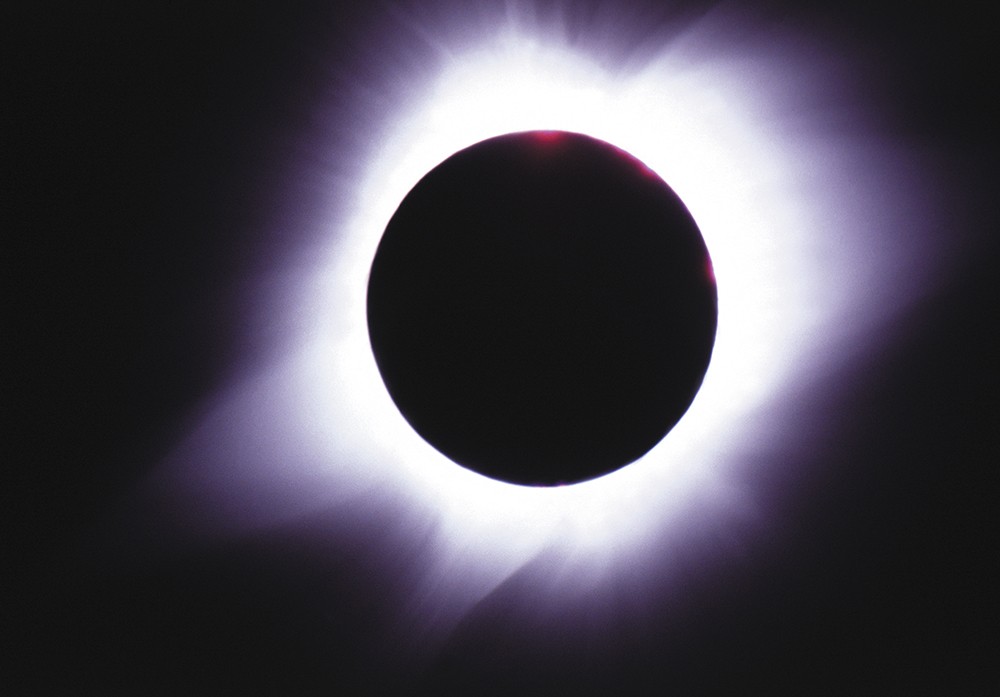 "Here on Earth, we're the only planet in the solar system that experiences this sort of eclipse," says University of Idaho physics professor Matt Hedman.

Set aside some time away from your workspace on Monday morning,

because you're not going to want to miss this.

Starting just before a quarter past nine on Aug. 21 — 9:13 am, to be exact, for those of us in Spokane and Coeur d'Alene — a sliver of the moon will begin to obscure the light of the blazing summer sun. For the next 73 minutes, the moon and its shadow over the Earth will slowly creep farther and farther over the sun's orb, reaching a peak obscuration of 90.5 percent at 10:27 am. The second half of the partial eclipse continues until 11:46 am, as the light of our solar system's star gradually returns to its full midday brightness.

While Spokane and its neighbors won't get to see the sun entirely obscured by the moon, the eclipse is still projected to be a spectacular and historic event for those of us sticking around town. The last time our region experienced a solar eclipse near this scale was almost four decades ago, back in 1979.

To see the sun totally obscured by the moon, you'll need to travel a couple of hundred miles south to what's called the "path of totality" — a roughly 70-mile band of shadow crossing the U.S. from Lincoln City on the Oregon coast to the beaches of Charleston, South Carolina. (For the 1979 eclipse, Spokane was fortunate enough to be just on the edge of the path of totality, and saw more than 99 percent of the sun obscured.)

But good luck in planning any eclipse trips at the last minute. Campgrounds, hotels and other venues in central Oregon and Idaho have been booked full for months and even years, and state officials are warning that road travel in the days leading up to and after the eclipse should be quite a headache. If you do want to get a little closer, though, the cities of Pullman and Lewiston will see obscuration peaks of 93.8 and 94.9 percent, respectively. Walla Walla will see more than 96 percent of the sun obscured.

Wherever you are this Monday, make sure to stop and really revel in the moment,

because the next event like this here may not happen in our lifetimes: The U.S. won't see its next total solar eclipse until April 2024, but that event will cross from Texas on up to Maine. After that, the 2045 eclipse will pass over the continent from west to east again, but much farther south than this year's. An eclipse as spectacular as this one won't touch the Pacific Northwest region again for more than a century.

"Here on Earth, we're the only planet in the solar system that experiences this sort of eclipse," explains University of Idaho physics professor Matt Hedman.

Our planet's moon, he says, is just far enough away and just big enough that it can entirely cover the sun from our perspective (when all the angles and orbits line up just right), while still allowing us to see the fiery material around the star, called the corona.

"That is rare, and a spectacular treat in the solar system, and is something we should appreciate as people who live on this planet," he notes.

Hedman compares the 90 percent totality we'll experience in Spokane and Coeur d'Alene to the amount of sunlight in the sky at twilight.

"Things will seem very strange," he says. "One of the things people can look out for, even if they don't have eclipse glasses, is to look at the shadows of trees — or any bright spot on the ground created by a hole between other objects — and they'll start to look like little crescents."

To fully experience the eclipse, Hedman suggests taking a break from whatever you'll be up to that morning to step outside and view the event during its various stages from start to finish, unless you plan to sit outside during the entire two-hour-plus event.

He cautions not to look at the sun unless you have proper (and approved — visit NASA's eclipse page for guidelines on safe eclipse viewing) eclipse-viewing glasses or other equipment. It's also easy to make your own projection viewer, with a pinhole in a piece of paper that can project the shadowed sun onto a blank surface.

Beyond watching the sun in a safe manner, Hedman also suggests stopping and observing your surroundings.

"One thing I've found is that getting a very close-up look of the sun is not as interesting as seeing how things are getting dark around you, and seeing how the shadows are changing," he says. "Be in the moment, and see how it's affecting things around you." ♦

• No matter where you are in North America, you'll see at least a partial eclipse.

• For a complete guide and other resources on the total eclipse, visit eclipse2017.nasa.gov