An abbreviated version of the Inlander's rapid-fire chef Q&A 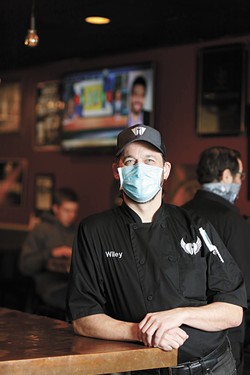 Young Kwak photo
Chef Michael Wiley of Wiley's Downtown Bistro and Prohibition Gastropub.
INLANDER: When did you know you wanted to become a chef?

WILEY: I always knew I wanted to have my own restaurants. When I started playing with food at the Spokane Club, I was about 19, and when I got a chance to work on the flambe cart, I thought, "If I can make a good career of being a chef and cooking for a living, and making people happy with what I create, that would be absolutely what I want to do." It's always been about creating guest experiences.

What's a dish or ingredient you hated as a kid but love now?

Tomatoes, barring all tomato sauces. Fresh tomatoes — I didn't like them at all, and I love them now; big juicy heirloom tomatoes. And raw fish. I was scared to death of sushi. I had [mental] conditioning in the way; and instead of trusting the world around me, I was trusting the conditioning. Once my mind was ready to open itself up, those experiences of food limitations changed.

Ramen. When I want to make a spicy soup, it's easy.

Name one restaurant in the Inland Northwest you return to over and over again.

Fleur de Sel. They crush it out there. It's so consistently amazing. I have a long list, but if I have to pick a favorite, that's the one.

Jalapeno cheddar chicken soup. That is a tough one because there's now two menus. I rarely take the time to sit down and eat. I've had dinner at the bistro twice in almost three years; one for a social media event and one was a birthday dinner with my dad. I just don't take the time to sit down and enjoy what we cook very often. It's more about how I get fuel in my body to keep doing this, so quick food and tastes as we go to make sure things taste good. But day in and day out how do I feed myself quickly? It's soup and sandwiches.

Where would you travel just for the food, and why?

Japan. It's such a different approach to food, and mostly it's an area I have the least amount of knowledge in, so I'd garner the most from it.

Right now it would be construction or mental health, psychology, and figuring out how to help people. I also like to create things, so for me construction is a big one.

Describe the Inland Northwest's culinary culture in one word.