Close Is Out at the National Gallery of Art. Is Picasso Next? 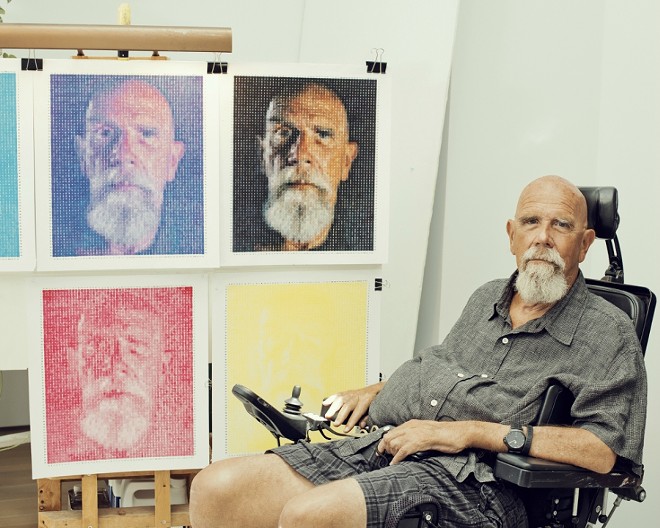 Ryan Pfluger/The New York Times
Chuck Close at his home in Long Beach, N.Y., June 17, 2016. The National Gallery of Art in Washington has canceled a Close exhibition, planned for May 2018, because of accusations of sexual misconduct that have engulfed the artist in controversy.
By ROBIN POGREBIN and JENNIFER SCHUESSLER
© 2018 New York Times News Service


When the Smithsonian’s National Portrait Gallery was preparing the wall text in 2014 to accompany an image of boxer Floyd Mayweather Jr., the museum decided to note that Mayweather had been “charged with domestic violence on several occasions,” receiving “punishments ranging from community service to jail time.”


Such context is common for controversial subjects in art. But far less so for artists themselves.

Now, museums around the world are wrestling with the implications of a decision, by the National Gallery of Art in Washington, to indefinitely postpone a Chuck Close exhibition because of allegations of sexual harassment involving potential portrait models that have engulfed the prominent artist in controversy. Close has called the allegations “lies” and said he is “being crucified.”

The postponement news Thursday has raised difficult questions about what to do with the paintings and photographs of Close — held by museums like the Metropolitan Museum of Art in New York, the Tate in London and the Pompidou in Paris — and whether the work of other artists accused of questionable conduct needs to be revisited or recontextualized.

“We’re very used to having to defend people in the collection, but it’s always been for the sitter” rather than the artist, said Kim Sajet, director of the Portrait Gallery, which has a large body of Close’s work. “Now we have to think to ourselves, ‘Do we need to do that about Chuck Close?'”

For the most part, curators and museum directors say that making artistic decisions based on personal behavior is a dangerous road to go down. All the museum officials interviewed said they plan to continue to retain and show their Close holdings, in part because he has not been charged with any crime and the accusations have not been proven in a court of law.

“How much are we going to do a litmus test on every artist in terms of how they behave?” said Jock Reynolds, director of the Yale University Art Gallery, which collects Close’s work. “Pablo Picasso was one of the worst offenders of the 20th century in terms of his history with women. Are we going to take his work out of the galleries? At some point you have to ask yourself, is the art going to stand alone as something that needs to be seen?”