How to give thanks to local farmers and growers this week. 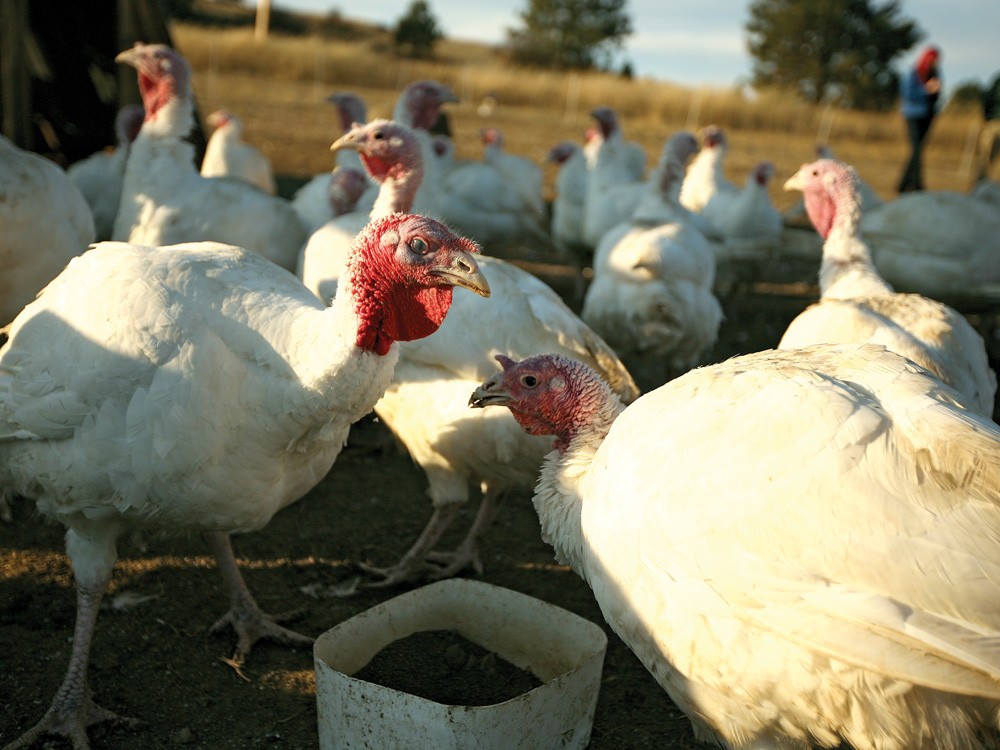 The countryside about 40 miles south of Spokane is the kind that people put on postcards. The low hills roll in different shades of green, bunched evergreen trees punctuate the mostly-round landscape. And here, out in the middle of pristine nowhere, a sound like a few dozen seals with kazoos stuck in their throats pierces the quiet. It’s part bark, part honk, and part shrill, whirling screech.

It’s the sound of food.

Allen and Emmy Widman met at Washington State University as students. They got married, had three kids and, through family ties, came to own and operate the Palouse Pastured Poultry farms in Rosalia, Wash.

For the past eight years, they’ve been raising USDA-organic-certified, free-range chicken and eggs that supply Spokane stores like the Main Market Co-Op and Eggers Better Meats and Seafood, and restaurants like Latah Bistro.

They’ve got the chicken thing down. But this is their first year trying out turkeys.

The Widmans’ turkey enclosure is nested next to their alfalfa field. The large space, protected by a solar-powered electric fence, is currently home to several dozen turkeys and nine metal-and-wood A-frame shelters.

These turkeys don’t look like the ones on Thanksgiving decorations — they are pure white, with bald pink and blue heads, and although most weigh in at 15-25 pounds, they could almost be considered lithe, not round. Still, they’re big, and bred to be that way. Flying is out of the question for these guys.

“These are aberrations of nature. They’re made for the table,” says Allen. “They are not athletes.”

Raising the turkeys organically, the Widmans must adhere to strict government guidelines — the second their animals touch non-organic feed, they’re ruined. It’s a process worth taking on, especially when it comes to flavor and texture. These birds have firmer, juicer meat, says Allen.

“In the industry, the only thing turkeys will really get … is corn and soy. I don’t use either,” says Allen, who feeds his turkeys organic barley, wheat, peas and alfalfa that he grows himself or buys locally.

As Allen steps into the turkey enclosure, the birds coo and shift their heads from side to side, alternating eyes, to see the man who has fed them since they were day-old chicks. They follow him like he’s a cult leader, and they follow him especially close, he says, if he has something shiny. Of course, they may recognize him, and they may have keen eyesight, but when it comes to intelligence, “they’re on the lower spectrum of things.”

“They love grasshoppers. When they can find them, it’s a big race,” says Allen. “But sometimes they’ll see one and start going for it, running full-bore, and then, halfway there, forget.”

This year, he happens to have a surplus of turkeys. After a company on the West Side backed out of a sale, the Widmans were left with 120 more turkeys than expected. From now until December — save for the ones Allen’s mother-in-law will pick out for holiday dinners — their turkeys are up for grabs at $5 a pound. It may be worrisome for the Widmans but, for those looking for a local turkey, it’s a stroke of luck.


October marked the end of farmers markets in the Inland Northwest. Since then, local farmers have shifted their focus to supplying places like the Spokane Public Market with their produce. The busy market — whose vendors are all local farmers or vendors — is filled with Thanksgiving-ready ingredients, like local cherry-pie filling, fresh celery and celery root, meats and boxes of apples.

Normally open Thursday through Saturday, the public market will extend its hours to the Wednesday before Thanksgiving this year. As it’s their first year in operation, they have a lot riding on the holiday.

“I think the main goal is to have some inspiration for the public market,” says Roger Stanley of Passionate Produce, “and support the public market to carry through the winter time so that we can be there for the spring.”

Stanley says the market is now well-established, since opening in June. If Thanksgiving is successful, he says, they could have enough momentum to continue growing, bringing in more products and vendors.

Aside from providing customers with a wide variety of local products, Stanley says, shopping at the market also offers other benefits around the the holidays.

It’s about meeting the people who put food on your table, and understanding what that means. While he says they “can’t promise rock-bottom prices,” the trade-off is fair — fresh food, local people, and the knowledge that the turkey on your table had a view you’d pay money for.

Shopping for local products is easy, but creating traditional Thanksgiving dishes out of them could prove to be more challenging. Sorry, but there’s nary a cranberry growing in these parts.

That doesn’t mean you can’t eat well, though. Here’s a recipe from Maverick catering chef Steven Brower that consists of a host of local products, most of which he says are available at the Main Market Co-Op.

1. Place raisins in a non-reactive bowl (like glass or stainless steel) and add bourbon, submerging them. Cover and refrigerate for at least 24 hours and up to seven days.

2. Pre-heat oven to 350 degrees. Sauté sausage for 8-10 minutes in heavy, large sauté pan over medium-high heat until cooked through, breaking it into small pieces. Using a slotted spoon, transfer the sausage into a large bowl and add bread.

3. Add onions and celery to drippings in the sauté pan. Sauté until tender but not soft, about 12 minutes.

7. Toss mixture well to blend. Cover and refrigerate. (Note: Everything up to this point can be made a day ahead.)

Steven Brower is a chef and owner of Maverick, a catering service located at 1014 N. Pines Rd., Suite 120 in Spokane Valley. Visit maverickspokane.com or call 477-9171.