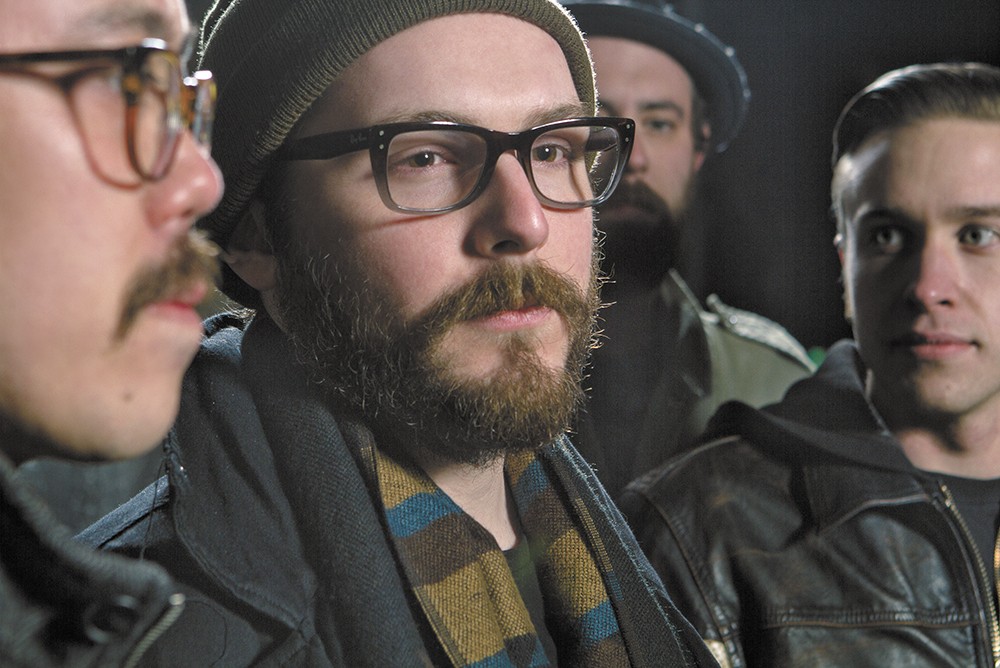 Chad Ramsey
Von the Baptist is set to release a new EP early next month.

Von the Baptist drummer Brandon Vasquez arrives at Coeur Coffeehouse for his interview several minutes early. A compliment on his Ryan Adams T-shirt sparks a discussion about his widely diverse tastes. A British punk band called Marmozets has recently caught his attention, and just as the conversation is getting deep into the admirability of screaming female vocalists, lead singer Vaughn Wood arrives.

Wood and Vasquez couldn't have a more natural chemistry together. They answer questions on one anothers' behalf, speak freely and let their responses build on each other. The two have worked together for the past three years in the Spokane-based rock outfit Dead Serious Lovers and recruited blues musicians Zac Fairbanks and Alex Morrison to create Von the Baptist last fall, making their debut as a full band last New Year's Eve.

Full of eerie melodies and story-laced lyrics, narrowing down this group's sound is a challenge. Hints of blues rock are embedded in their music, though classifying them as such isn't quite right. Too slow to be considered purebred rock 'n' roll but more complex and soulful than your average indie rockers, these guys are content with "not really jumping on any trends," Wood says.

With emotional chord progressions building into an instrumental climax, the members of Von the Baptist carry expressions of focus when they play. The intensity in their sound parallels the intensity of their commitment to communicate life experience through song.

Serious once again, Wood says, "To me, when someone communicates really well through their music, that's awesome. It doesn't matter if it's happy or sad. If it's well done, people like it. They connect."

Their first five-track EP, aimed for an early January release, has gone through a few final touches following the recording process in Wood's home studio over the past couple of months.

"It's cool being able to have the luxury to [record] in our own houses rather than being stressed about [professional] studio time," Wood says.

The drawback is that he and Fairbanks are chronic perfectionists and recording at home means there's no limit to the number of times they can redo their work. "That's why it's taken a while," Wood explains.

For the process, Wood recorded the scratch tracks, or the outline of the songs, while Vasquez independently recorded the percussion. Next, they layered the guitar pieces and finished with the recording of Wood's vocals. Currently, their close friend and producer/Bartlett co-owner Caleb Ingersoll is "dolling it up," says Vasquez.

The primary songwriting responsibilities belong to Wood, but "[Vasquez] just knows what I'm trying to go for, so he writes his own parts. I never tell him what to play," Wood says. Fairbanks and Morrison also fill in their own details, working with the structure Wood presents and building on top of it.

"Most songwriters are trying to communicate something or make sense of their own head," says Wood. "I write to connect to myself."

While many fear vulnerability when sharing their emotions, especially with large groups of people, Wood thrives on it.