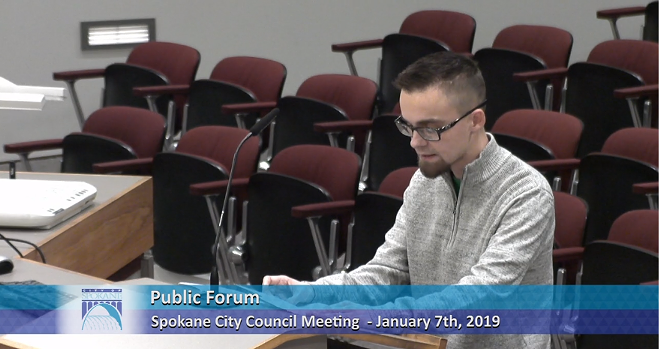 CityCable5 screen shot
Anti-abortion activist Jake Eakin calls for the city council to make Spokane a "Sanctuary City" for the unborn, by defying the Supreme Court to ban abortion within the city limits.

City Council member Mike Fagan, and co-host Tim Benn, had a lot to talk about on their radio show with Moses Lake-based anti-abortion activist Jake Eakin.

This month, Eakin and several of his allies have been attending Spokane City Council meetings, using the public forum to demand that the City Council vote to defy Supreme Court rulings and ban abortion within its city limits.

"We will keep coming to bring this issue to your attention again and again and again because innocent people are being executed in Spokane under your watch, and you have a duty to stop it," Eakin told the council. "You will be held accountable before God for not acting."

It was the kind of rhetoric that Mike Fagan, the sole conservative on the council, found inspiring enough to invite Eakin on his radio show, Right Spokane Perspective, a local FM and AM radio show.

During the radio show, the two reacted with a chorus of agreement: Fagan talked about “61 million dead babies,” stressing that “these are people. These are boys and girls, brothers and sisters."

Fagan hums in agreement when Eakin says that “abortion is sin. The sin is murder. The only answer to sin is the Gospel of Jesus Christ.” They quote Bible verses to each other. Eakin calls abortion 10 times worse than the Holocaust, and Fagan doesn't disagree.

Fagan even goes so far as to compare Eakin to the "watchers," referring to an Old Testament passage where God commands the prophet Ezekial to tell the wicked to repent, lest Ezekial have blood on his hand when God punishes the sinners.

But what they don't talk about — and what Fagan says he didn't know about when he invited Eakin to be on his show — is that Jake Eakin is a murderer.

The details are grisly. When Eakin was 12, he and his friend were hanging out with Craig Sorger, a special education student, at Oasis Park in Ephrata, Washington. In court, Eakin testified that his friend hit Sorger over the head with a rock. Eakin discussed about how he bashed Sorger in the head and his legs with a stick over 20 times. He described Sorger crying out, "Why are you doing this to me?" as he was dying.

Sorger was found with 34 stab wounds across his head, neck and body.

In 2016, a 25-year-old Eakin made headlines again, when he escaped from work-release, ultimately being recaptured in South Dakota.

When the Inlander asked Fagan if he was aware of Eakin's record, the council member reacted with shock, laughing at the revelation's absurdity.

"That same guy? You’re kidding me?!" Fagan says. "He didn’t say anything or didn’t do anything that indicated that he was a murderer. Geez. Oh, man."


Fagan was, however, aware of Eakin's highly visible and inflammatory protests.


"I am aware of, to a certain extent, some of the people he travels with, hangs around with. They’re the guys at the rallies and protests with very graphic signs," Fagan says. "Is that a good way to convey a message? I’m sure there’s a couple of better ways to convey the message."

Eakin is part of the self-proclaimed "abolitionist" movement, that rejects the label "pro-life." He argues that the bulk of the pro-life movement has been too soft, too euphemistic, too unwilling to call out evil for the sake of offending people.

“I've been thrown in jail, been under an FBI investigation, faced unjust probation violations, received hundreds of death threats in the last few months all because I won't stop working to abolish abortion,” Eakin writes on Facebook.


Fagan doesn't say he would have nixed his interview with Eakin had he first learned he was a murderer. If anything, he says, it could have made the show more interesting.

"I would have been able to work in his conviction. Here’s a guy, worst of the worst, convicted murderer, saved by grace, he’s repented, now he’s one of God's soldiers," Fagan says.

But if you're more supportive of the right to abortion, the story is something else entirely: A murderer gets out of prison and associates himself with a movement that has, at times, lapsed into violence.

"Zealotry has its dangers," Lewis says. "People do things that they wouldn’t normally do in other circumstances."

On Wednesday, Lewis shared her concerns about Eakin and Fagan on Facebook.

"When you’re grappling with your own human flaws, and you’re being encouraged and rewarded for escalating rhetoric, what's to stop there from being the next step where somebody gets hurt?" she tells the Inlander. "I was raising an alarm, I don’t want to see people get hurt in my community."

It was the Yakima County jail, where Eakin found religion. While sitting in the jail cell, he says, his sentence extended by his escape attempt, he started reading Eric Metaxas's biography of Dietrich Bonhoeffer, the German pastor who tried to assassinate Hitler. Metaxas himself is an anti-abortion activist, speaking at an anti-abortion fundraiser at Life Center in Spokane back in 2013.

That book, he says, got him interested in reading the Bible.

"I felt like God made himself real to me. Changed my heart. Changed my desires," Eakin says. "I began to study the Bible, got a desire to help the weak and voiceless and the oppressed."

When he got out of prison, however, Eakin says, he saw a Facebook video of Rusty Thomas, director of the Operation Save America anti-abortion group, linking arms with other activists outside an abortion clinic in Louisville, Kentucky.

Facebook screenshot
A video screen shot of Jake Eakin at a Dec. 19 Planned Parenthood protest.
"I started getting passionate about this," Eakin says.

Pro-lifers, Eakin says, want to seek compromise by, say, passing laws that prohibit abortion after a fetal heartbeat can be detected. But to abolitionists, that's not good enough. They want to outlaw abortion completely — including in vitro fertilization (IVF) and Plan B pills — and immediately. They feel that anything less than the harshest rhetoric — the same words people use if a 5-year-old is being murdered — is dishonest.

"We call abortion murder and child sacrifice. For a modern world, it might seem like it’s gory and bloody terminology," Eakin says. "We're trying to really highlight the severity of what’s happening."

As much as Fagan and Eakin seem to agree with each other, there does seem to be a key difference.

Fagan makes a common pro-life argument, that there are two victims to abortion — the human being aborted and the woman getting an abortion. But Eakin explicitly rejects that kind of reasoning. On Facebook, he's uploaded a number of memes on Facebook featuring incendiary aphorisms.

"The only time there are two victims in an abortion is when twins are murdered by their mother," one reads. If women who have abortions are victims, he says, they are a small minority.


And it's not just abortion he rails against. He also uses similar rhetoric to talk about public schools, which he argues indoctrinates children.

"We can't slay the dragon of child sacrifice, if we allow our children to be educated by Moloch," reads one post.

"Abortion is one form of child sacrifice, and public education is another," reads another.

Eakin argues that flooding social media with this sort of rhetoric can be effective in shifting more moderate pro-lifers to his way of thinking. It also, he says, is more effective at creating media attention.

But tactics aren't his primary concern.

"We're not concerned with results," Eakin says. "We’re not pragmatists."

Instead, he argues, it's a moral obligation. In October, he's recorded standing outside the Spokane Planned Parenthood and, under amplification, decrying the clinic as "paid assassins, who have been paid by their fathers and mothers who have decided to murder their children."
When the Planned Parenthood security guard politely points out that city ordinances prohibit making noise that unreasonably disturbs the peace within a medical facility, Eakin reams him.

“The blood of these little children is on your hands,” Eakin says. “On judgment day you will stand before a righteous and holy God and answer for escorting these women into these place to murder their children. ... Every cent you make here, is blood money."


The irony, of course, is that Eakin literally did have the blood of a child on his hands, years ago. But that hasn't given him pause when he calls women getting abortions murderers.

And, Eakin says, he's deserving of the same punishment.

"If this had been true justice, in my case, it would have been capital punishment," Eakin says. "I deserve death, even after accepting Christ."

Though Eakin has been arrested for trespassing, he says his movement eschews all types of violence.

"We don’t believe that the church has been given the authority to bear the sword," he says.

Yet, this is an issue where the threat of violence hangs in the air. There's a long history of actual violence and terrorism against abortion clinics and providers. Spokane Valley's Planned Parenthood office was bombed back in 1996. An arsonist set fire to the Pullman Planned Parenthood clinic down in 2015.


As Eakin and his allies have protested outside the Planned Parenthood in Spokane, he writes on Facebook, that he's seen some women turn around and walk away. It's not clear whether they turned away because of fear, guilt or discomfort, but he's jubilant no matter the reason.

"Praise God!" Eakin writes on Facebook. "One turn-away from the Spokane baby-murdering deathpit."

At one time, Lewis, the former state Senate candidate, had an anti-abortion view closer to Eakin's. But she says that was before she got pregnant. She had a drink on St. Patrick's day and woke up in bed with a man she didn't remember having sex with.

She chose to keep her baby. But she also says that having that choice — an option — was crucial for her own psychological healing. The choice felt like she was in power, in control.

"That was one of the first steps that got me out of the victim mentality," Lewis says. "I think the situation would have been more traumatic if I had a continued loss of my agency."


Lewis says she has dear friends on both sides of the abortion debate. But she says that, if people really want to reduce abortion rates, they need to concentrate on things like education, contraception and economic stability.

"These people who are protesting outside of clinics, what are they doing to fight for food benefits and social safety nets?" Lewis says. 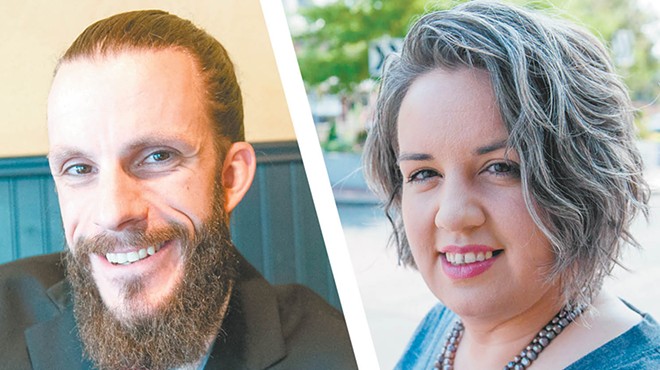 She argues that Eakin's tactics are counter-productive.
"There are so many things we can do to help those who are in tough situations. Screaming at someone with a megaphone and threatening their safety isn't going to have the outcome they're seeking. All they’re doing is adding trauma to an already traumatic situation," Lewis says.

"Jesus wouldn’t be there with a megaphone. He’d be offering grace and love and understanding and compassion."


And Lewis says that compassion extends to her view of Eakin.

"I’m worried that he’s taking the guilt and the hate that he feels for himself and projecting it upon other people," Lewis says. "He hasn’t been able to forgive himself yet. At the end of the day, we have to offer that love and forgiveness to him too."