I've been chasing little plastic balls into the rough for 12 years. But now I've discovered the other golf.

Young Kwak
Scott A. Leadingham goes over to the dark side at Corbin Park in Post Falls, Idaho

Uncharted Territory
I'm new here. Where do I ride my bike?

Crossing Over
I've been chasing little plastic balls into the rough for 12 years. But now I've discovered the other golf.

Walking on Water
Getting upright on a paddleboard was easy. But it's a miracle I didn't fall in.

I went golfing twice in one day last week, at two different courses. At one — way too early in the morning — I paid $50 for the privilege to hit little white objects into rattlesnake-ridden sagebrush and chase after them in a silly-looking electric cart.

At the second, I paid nothing, walked through tree-lined fairways, kept all my shots in bounds and even got a birdie.

That’s the beauty of disc golf, a sport that’s pretty close to regular golf (the kind I’ve been playing for 12 years) with the exception that you throw a hard plastic disc rather than whack a small plastic ball. Both use the same lingo: par for the standard number of shots to complete a hole, birdie for one under par, bogey for one over. There are slices for wayward shots and out-of-bounds areas with penalties.

Spokane is home to two public disc-golf courses, Downriver and High Bridge. Another two, Four Mounds and Stimpi Ridge, are on private property and open only by appointment. North Idaho offers several more and, I’m told, they’re much more technically difficult. Every disc golfer I met in the past two weeks mentioned Farragut State Park, with three separate courses, as the crown jewel of the region.

The sport’s exact origins are predictably cloudy. A brief history from the Professional Disc Golf Association traces early semblances of it to kids playing “Tin Lid Golf” in 1926. More formal credit is given to George Sappenfeld, a parks and recreation director in California, for pressing a Frisbee manufacturer to help facilitate formal tournaments for kids in the late 1960s.

My first venture into disc golf came at Stimpi Ridge, south of Spokane near Latah Valley. It’s named for its proprietor, Steve “Stimpi” Simmons, who set up the course 10 or 12 years ago (by his estimation), when disc golf was just taking root in Spokane with the development of the Downriver course. Simmons not only runs his own course but maintains an extensive equipment shop at Stimpi Ridge, where disc golfers of all levels can stock up on essentials.

By happenstance, Simmons was hosting a tournament that day, which had just wrapped up when I arrived. Two golfers, Justin Schrack and Tom Stephens, who’d won the tournament, graciously agreed to show me the ropes.

“This course is crazy because you have to keep it in, and there are out-of-bounds everywhere,” warned Schrack.

I wasn’t too worried, since I figured I’d exhausted my monthly allotment of out-of-bounds that morning playing regular golf. Schrack and Stephens also taught me — and it makes perfect sense — that what I call “regular” golf is better described as “ball” golf.

Each player had a bag (yes, there are bags in disc golf, though notably smaller than my “ball” golf bag) full of discs of varying sizes and thicknesses. The distance to the hole determines which disc to use. Just like in ball golf, there are drivers and putters.

I asked their advice on how to get started in the sport, with tips on getting properly equipped, and they didn’t hesitate. “Talk to Steve [“Stimpi” Simmons],” they both say.

You might notice that everyone mentioned to this point is male. That’s because there are many more men playing disc golf than women. The tournament I visited at Stimpi Ridge included only one woman. At another course I visited, a few women were playing, but there were a lot more men.

Schrack and Stephens recognize the sport’s seeming gender imbalance. They said there tend to be more men than women playing, but there is a concerted push to get more women interested.

Whether they’re male or female, Simmons says starters shouldn’t worry too much about the gear right away but instead just go out and play and pick up a few starter discs on the way. Still, he warns that local sporting-goods stores sell a limited amount of disc golf equipment, and the sales staff may not be knowledgeable about an admittedly out-of-the-mainstream sport. He advises people to simply come talk to him about equipment.

“People are real friendly, real accepting,” says Simmons, encouraging new players just to show up at a local course and join golfers who can help. That’s what I did three days later.

For $20 I picked up driver and putter discs from a sporting-goods store on my way to Corbin Park in Post Falls, Idaho. Three guys standing on the first tee offered to show me the course as I struggled from hole to hole to keep my throwing style smooth. The course is on the Spokane River in a forested public park that includes swimming, picnic areas and a baseball field. It’s a challenging course for a newbie like me, especially if you happened to buy discs that are magnetically attracted to pine trees, which apparently I did.

One hole provided a particular challenge. The third tee rests atop a rocky bluff jutting off the river. It requires a long throw crossing a pothole-strewn road, through brush and branches, to a target 315 feet away. It might as well have been 315 miles. Trying desperately not to embarrass myself in front of my guides, I overcompensate the strength behind my throw. My driver disc, bought 45 minutes earlier, peters off into the bushes below, acquiring scratches and dings along the way. I think I mustered a five or six on the hole, but it could have been 20 for all I know.

The funny thing is, I really don’t care. I know I’m learning. I’ve been playing ball golf for 12 years and still embarrass myself.

Leaving Corbin Park, I reflected on my struggles — and my prospects for continuing in disc golf. After getting a glimpse of the culture and community around the sport, I can understand its allure.

I also found a big difference between disc and ball golf. Try walking up to the first tee on a ball golf course and say to the good ol’ boys gathered there, “Hey, I’ve never played. Can you show me around?” Prepare for laughs or icy stares.

Do the same at a disc golf course.

Stimpi Ridge Open by appointment only. Call 838-4331, or visit stimpiridge.com

• Brute strength can help a disc go far, but accuracy and stability are key to lower scores. The “ball” golf saying still applies: “drive for show, putt for dough.”

• There are many different ways to get a disc in the air and advance it to the hole. Even skipping it on the ground, like you would a rock on the water, can work.

• Search “disc golf tips” on YouTube for free, informative videos with training for all levels. Videos from user “sportdisc” come from Discraft, one of the two main disc golf equipment companies. See their YouTube channel at YouTube.com/user/sportdisc. (Scott Leadingham) 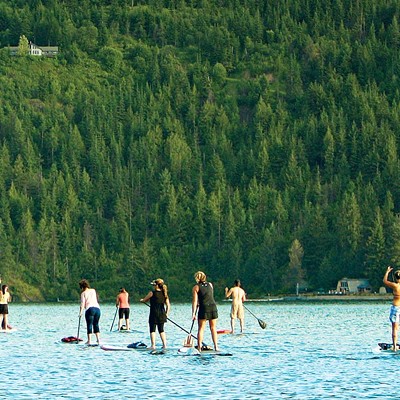 Sure it's been legal for a decade, but someone on your list may be interested in getting into it