Dak Harper photo
Morris' seared seabass in a rich broth may soon be on the menu at Luna.

There is no marijuana on the menu of a Culinary Dope event, because although consumption is legal in Washington, cooking with it in a commercial restaurant setting is not. Chef Joe Morris, the event's creator, however, doesn't have anything against cannabis.

"Dope can be anything," says Morris with a shrug, adding that anything can be addictive, including good food or music.

Morris is an imposing figure, mostly muscle at age 40, a plastic pick side-angled off the back of his head. He talks with his hands like a New Yorker (though he's actually from the southeast) and is at turns funny, garrulous, and even a bit guarded, like the streetwise kid he used to be before he became a streetwise father of four.

Culinary Dope is hip hop-meets-haute-cuisine with amazing food, but also the vibe Morris creates through music and at buzzy locations like Inland Pacific Kitchen or Wanderlust Delicato, both in downtown Spokane. Inspired in part by pop-up dining events like The Wandering Table, before chef-entrepreneur Adam Hegsted turned the experience into a brick-and-mortar location, the occasions Morris orchestrates are higher-energy and multi-sensory, more like a party.

"Like an organized party," he says, adding, "I want you to relax. I want you to meet people and get out of your comfort zone."

Although he talks about dishes he's made for past iterations of the series, like his version of salad caprese with tomato gelée, what Morris is most interested in is the way Culinary Dope impacts people.

"I like seeing people eat," he admits, knowing that he can provide an experience they might not get elsewhere. "[Diners are] gonna get a vibe and experience that I feel like they wanted but didn't know they did."

Morris created Culinary Dope to expand his identity beyond Luna restaurant, where he's been executive chef since 2019, turning out delightful dishes like tuna tartare and oxtail sliders. His other motivation, however, was responding to the pandemic shutdown that decimated local businesses and isolated people from one another.

"When you're working every day to build something, you don't know how far you've come," Morris says. "It kind of hurt to see everything closing down." 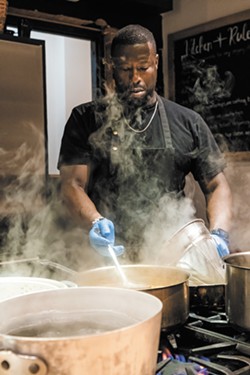 Luna, like many places, was able to pivot, but others weren't faring so well, Morris says. So he created the first of three types of Culinary Dope events in June 2021 to get things "poppin'" in the culinary industry.

"Everyone wants to be a judge," Morris says. "Everybody watches Iron Chef."

For $150, attendees get three dishes from each chef, like the crab legs with morel mushrooms and a pea puree Morris created for the inaugural 2021 competition pitting him against former Inland Pacific Kitchen chef Austin Conklin. Drinks flowed, the place pulsed with hip-hop beats on high volume, and the event was a hit.

Even though Morris lost, he learned a valuable thing: Patrons want to engage with not only one another, but also the chefs.

"It was who I was," says Morris of that first event, which solidified in his mind that his vision of a culinary street brand could work.

In a later rematch with Conklin, Morris took back the big blingy trophy necklace. He successfully defended his title a second time during a summer 2022 throwdown against chef Peter Froese of Gander & Ryegrass.

Morris also hosts a "Dope" brunch ($150). The first was held at Durkin's Liquor Bar, highlighting what Durkin's does best, including craft cocktails.

The third event Morris does under the Culinary Dope umbrella is a restaurant takeover. In August 2022, Morris collaborated with Wanderlust Delicato to offer a five-course, wine-paired meal ($200) served on the downtown restaurant's rooftop terrace.

Morris liked one of the featured dishes so much — seared seabass with a rich, concentrated broth called fumet, braised fennel and marinated cherry tomatoes — he's adding it to Luna's menu.

"Like the left hand feeding the right," Morris says, "all connected."

Sometimes Morris does an event that's neither brunch, nor takeover, nor competition.

Channeling his own Southern background, the menu for Shantell Jackson's and Tracy Poindexter-Canton's 2021 Terrain gallery show, "Her Words to Life: A Celebration of Black Women's Voices," included fried green tomato salad and chicken and dumplings ($150).

Every Culinary Dope event is different, says Morris, but they all have a theme. And his ulterior motive, if you can call it that, is to create and strengthen community through food.

Look for the next Culinary Dope event later this fall. It might be brunch or a food champs event, says Morris, or it might be something else he's cooked up. That's just how he rolls. ♦ 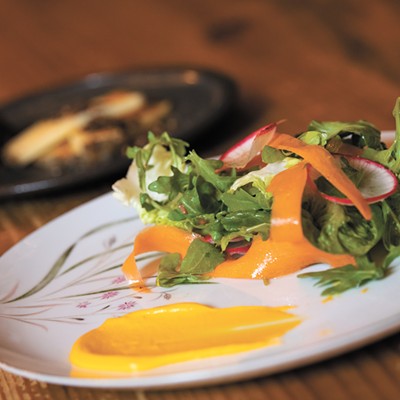