Linemen rarely get the credit in football, but the Shock’s championship hopes rest on shoulders like Ed Ta’amu’s. 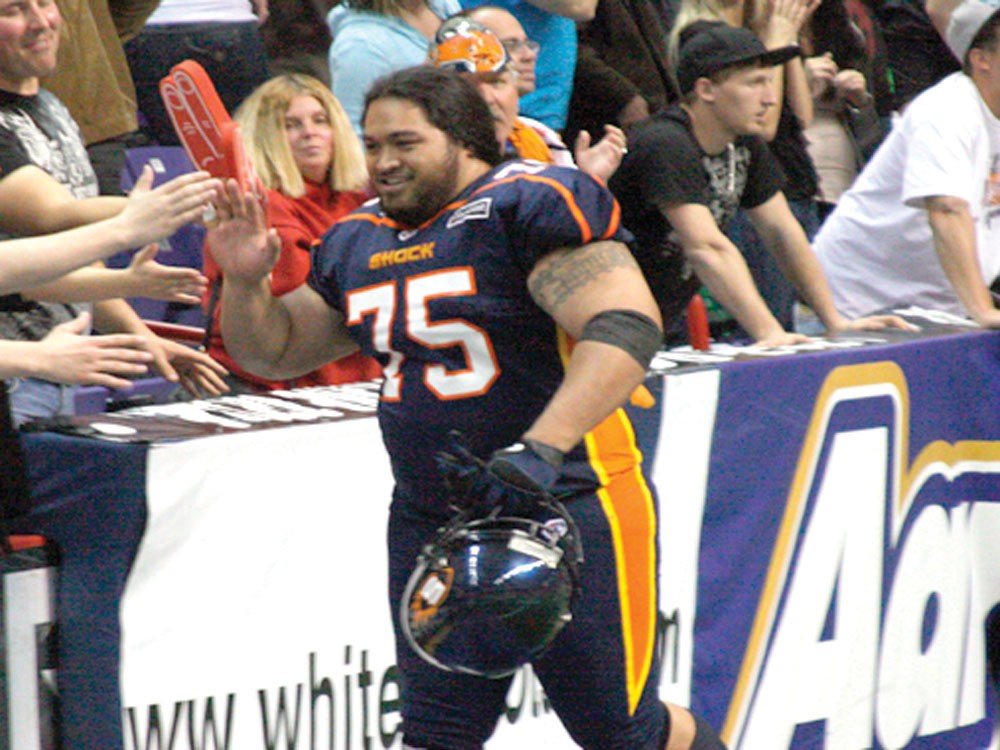 If you ask Ed Ta’amu about his job, it doesn’t sound too difficult. Plenty of people work in warehouses or help out in the office when it’s needed. But his other gig, the one where he throws himself in front of 300-plus-pound men bound and determined to get by him? That’s a different matter altogether. Of course, it helps when you’re carrying around 350 pounds of muscle on your own.

Ta’amu is an offensive lineman for the Spokane Shock, currently 12-2 and sitting atop the National Conference standings. With two games left to go in the season — including one at home this week against the second-place Chicago Rush that will help determine if the Shock will enjoy home-field advantage throughout the playoffs — Ta’amu’s just looking forward to doing what he does best: helping the Shock win.

He’s had a standout year of professional and personal triumphs — including seven receiving yards and a touchdown. That touchdown, the first of his career, came against the Tulsa Talons on June 18.

“It was fitting because it was Father’s Day that weekend, so to be able to do that for my son, it was crazy,” he says.

Ta’amu got his start in arena football in 2006, when he received a call from Shock owner Brady Neslon.

“[Nelson] is a BYU alum, and he’ll say otherwise but we always used to beat up on his BYU Cougars when I was at the University of Utah,” he says with a laugh. “That’s why he called me and not one of his BYU players.”

Ta’amu was a member of the inaugural 2006 team that went on to win the league championship before joining up with the Kansas City Brigade of the Arena Football League. But after that league folded (and the Shock joined a newly reformed AFL), Ta’amu signed with Spokane for a shot at an encore performance.

Of course, being in a different league means the road to the Arena Bowl probably won’t be as easy this time around.

“We are no longer an af2 team,” says Head Coach Rob Keefe. “I recruited players who can play at this level. From a fan’s perspective, it’s a big step up … Like the difference between Eastern Washington and Washington State, they’re playing the same game, but they have a lot different competition.”

Keefe says the move to the AFL means a lot of things are changed for the Shock, even though the community or fans may not have felt it at the time. In a league boasting markets like Dallas, Chicago, Orlando and Cleveland, Spokane’s ability to compete (and win) might burnish the city’s stature.

One of the biggest advantages of the being associated with the AFL is the national television coverage, courtesy of the NFL Network. The Shock won their first game on TV against the Iowa Barnstormers last week, 48-42, and they’ll be making encore appearances for the last two games of the regular season.

Keefe says exposure on a national stage could be akin to the attention received by some of the elite college basketball programs in the area. “We’ve seen Gonzaga on ESPN before, but Spokane in the title of the sports team will have people asking where it is,” he says. “I want to represent Spokane and the Inland Northwest.”

But it’s not all about ratings for the Shock. Despite having locked up a playoff spot and home-field advantage for the opening round, players and coaches alike aren’t done with the season yet. Both Ta’amu and Keefe say that while winning the division served as an important milestone, it was just one step toward their ultimate goal.

“We understand you have to win your division, win particular games. We realize every game means something,” Keefe says. “Our main goal is to win the AFL championship.”

For Ta’amu, there’s an added focus on hitting the last three goals of this season — winning the division, making it to the playoffs, winning the championship — because it will likely be his last.

“I think I’m hanging up the cleats and I’ll just live vicariously through my son when he’s old enough to play sports.”

The Spokane Shock play the Chicago Rush at 5 pm on Friday, July 23, at the Spokane Arena. Remaining tickets are: $13-$25. The game is being broadcast on the NFL Network.