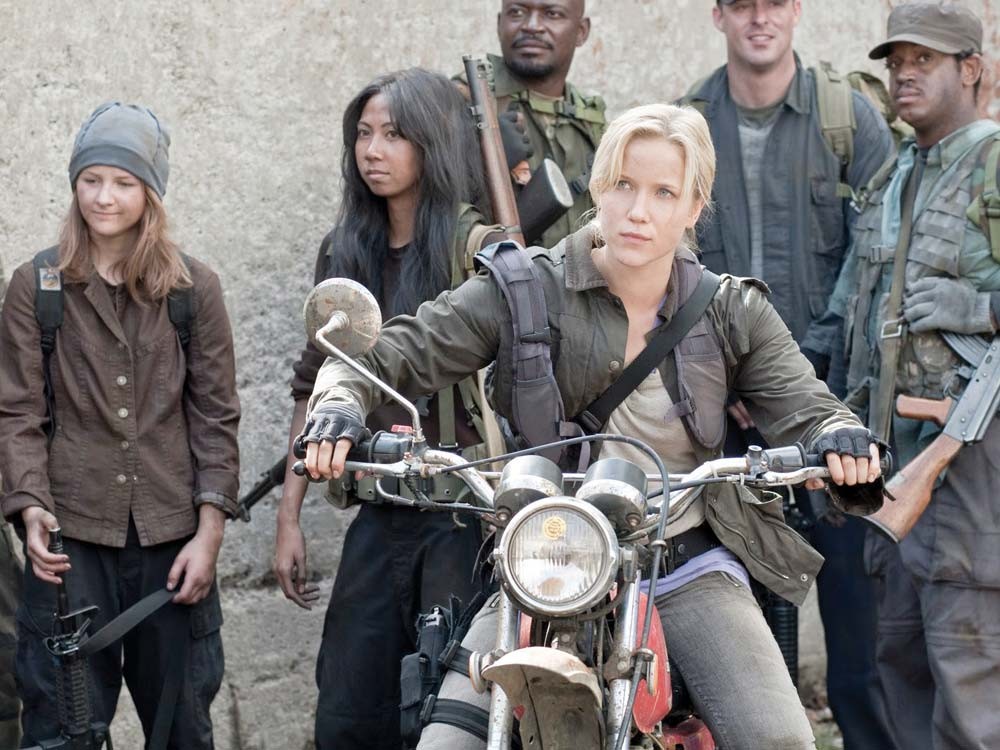 Falling Skies, a new TNT series about a resistance group fighting against alien invaders, is closer, thankfully, to AMC’s Walking Dead than to V.

Here, the aliens — black six-legged xenomorphs and big metal two-legged mech-robots — have already invaded, and the military and major cities have already fallen. The aliens — “skitters,” the puny earthlings call them — have captured scores of children, and have implanted mind-control devices in their spines. As in Walking Dead, survival — not Independence Day-heroism — is the priority.

Dumping viewers in the middle of a long-underway conflict has its advantages: It sets up the conflict and stakes immediately, with no prologue needed. But that choice also results in a lot of “Don’t-you-understand-he’smy-son!?” dialogue, and all that expositional dumping weighs down the first few episodes.

The main character, Tom (Noah Wyle, ER) has a son and the sort of beard that college students get during a European backpacking trip, but no other interesting traits. Pediatrician Anne Glass is played with a typical Moon Bloodgood (Daybreak) performance: beautiful-bland.

The only truly interesting regular is the acidic anti-hero survivalist John Pope (The 4400.) He chews the scenery, loudly, while the other actors, mistakenly, try to be subtle.

Showrunner Joss Whedon, of Firefly and Buffy the Vampire Slayer, always understood one key thing about science fiction: With all its laser-firing and disbelief-suspending, sci-fi is inherently distancing — tending to draw focus toward action scenes, plot and conceptual brainstorms, and away from dialogue and characters.

So you’ve got to compensate with more interesting dialogue and bigger characters: If you must give us aliens, zombies, or orcs, give us characters to match. Give us the insecure schemer Benjamin Linus on Lost. Give us the twitchy genius Walter Bishop on Fringe. Give us Darth Vader.

The plot twists, occasional directorial poetry, and suspense about what’s next can propel Falling Skies for a while. But without more inherently interesting characters, Falling Skies will inevitably follow Flash Forward, V, and The Event down the wormhole of failed and forgettable serialized sci-fi.

Childrens Hospital
At one time, you probably scoffed at Cartoon Network for running live-action comedies, accusing them of diluting their cartoony vision. Ah, but shows like Eagleheart and Childrens Hospital, existing in an alternate universe of constant silliness, were even more cartoonish than the cartoons. In Season Three, Childrens Hospital continues zanily spoofing Grey’s Anatomy. (Adult Swim, Thursdays, midnight)