When two brothers lost their faith, they found their voices 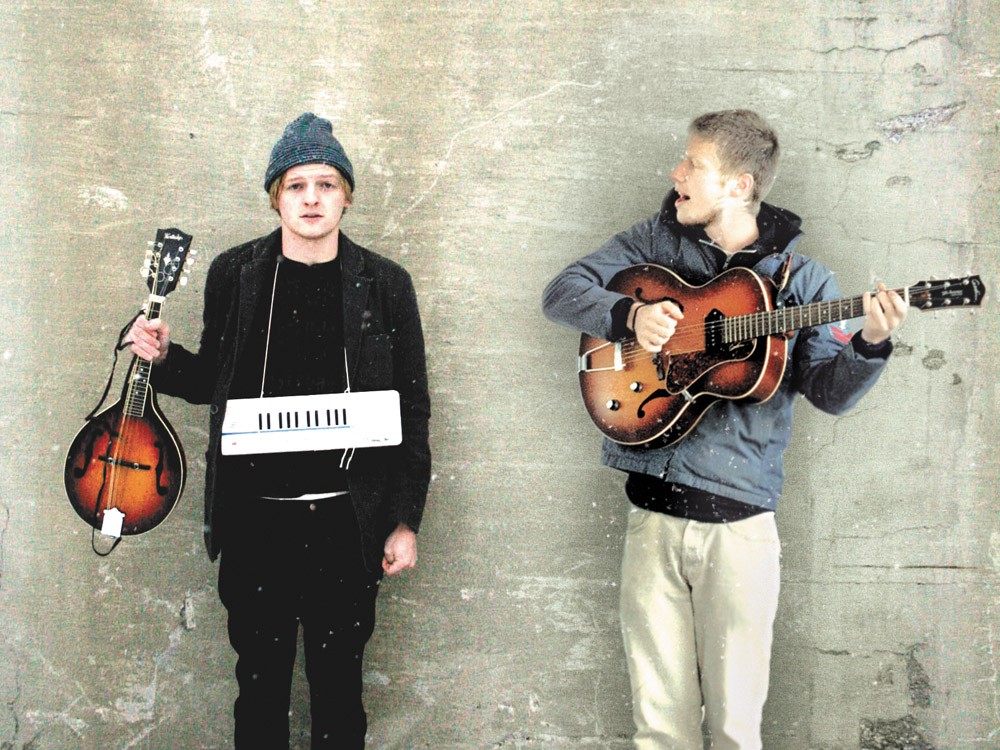 It comes out cool and smooth, easy and effortless. He’s never macho or loud; he’ll never scream to get his point across. Instead, he chirrups long lyrical curlicues and tongue twisters — always in that same, safe caramel tone.

The opposite can be said about his younger brother, Kent. His voice is nearly always straining, like it’s being extruded through vocal chords lined with gravel and cigarette butts. He screams and stomps occasionally, and when he sings, it comes in fits and starts. One minute he’s fine, the next he’s lost his cool.

But despite the dissimilarity, there’s something about the Ueland Brothers — four years apart, 300 miles between them — that has made people gather around them.

Back in the mid-2000s, it was Dane, a quiet Whitworth student, who drew crowds to Spokane coffee shops and wineries with his honest take on folk music.

And now, as the singer and guitarist in Terrible Buttons — another Whitworth offshoot — the younger Ueland, Kent, is drawing crowds of devout fans to Spokane bars and house-show living rooms.

They think it might have something to do with their God problem.

The children of a Baptist elder and deaconess, the Ueland brothers were reared on holy water and miracles. The first songs they sang were for their Pentecostal church’s members of worship teams and youth groups.

Kent watched as his older brother first took music outside the walls of their church. Dane formed a “poppy and sugary” emo band, the Anomalies, and swept battleof-the-bands competitions throughout the Northwest.

Sometimes he tagged along in the back seat of Dane’s band van.

“I remember [thinking] ‘I am so pissed, because I don’t do shit, and my brother is going to be famous,” Kent says today, recalling watching his brother’s band sweep several competitions. “He just keeps winning and winning, and I’m the kid in the back seat.’” But it wasn’t until Dane left home that he found his true voice. As a student at Whitworth, far from the church he knew, he started to question everything he’d been taught about religion as a child.

“I [was] having sort of a shift in the way I saw the world,” Dane says. “Being raised in a religious family … falling away from that turned out to be a pretty massive event in my psyche. When I realized a lot of the truths I was raised on didn’t really apply to me anymore.”

His first songs, he says, were about coming to terms with “losing your faith.”

The first time he sang those things aloud, Dane felt like he was taking a blind leap.

“You’re going to hurt people sometimes when you write songs that are personal. It’s like reading a journal aloud to everybody,” he says.

During Dane’s last year at Whitworth, Kent enrolled as a freshman. And soon, Dane watched as his brother started writing his own songs — songs about struggling with his faith.

“Since we sort of bucked [Christianity], it’s been sort of tying us together,” Kent says. “If they — they being fundamentalists — didn’t get to you when your brain was soft, it wouldn’t stick. But they did get to us when our brain was soft.”

While Dane reacted to that realization by writing literary songs filled with biblical allusions, Kent wrote songs about going to hell.

“If you had to generalize our music into one-word emotions, it would be like [Dane is] sad, and I’m angry,” Kent says.

Dane agrees. Where he spent years brooding quietly on stages, he respects how Kent can show his heart — without shame or hesitation — to a crowd.

“[Kent] sings without showing weakness,” he says. “He’s got a song called “Teams,” where he says ‘I’ll take the fiery lake/ If you get the pearly gates’ … He’s damning himself. He’s not denying it. He’s saying ‘Give it to me, I deserve it.’” “His loss of faith was just as massive as mine. He came out of it with this fiery material,” he says.

Today, as Dane collaborates in Seattle with his new band, & Yet, he says his struggles with faith don’t come out much anymore in his music. He’s OK with it now.

“My newest effort is about Kent and I growing up,” he says. “I think family is an incredible concept to document in music.”