It's the longest lending period the library allows

, and for one of the most unusual items patrons can check out.

Displayed on a table between the children's and adult book sections, the gray card catalog unit looks like a throwback to the past, but not because the library is going back to a pre-digital checkout system. Instead, alphabetized labels for "greens," "hearty vegetables," "onions" and other edibles are affixed to 30 drawers filled with little, lumpy envelopes. From pumpkins, melons, carrots and tomatoes to peas, cucumbers, peppers and squash, the Otis Orchards Library boasts dozens of lendable plant varieties, including flowers.

Seed libraries follow the same model as lending books, music, films and other materials, yet place more responsibility on the borrower (as such, there aren't any seed-related fines at Otis Orchards). Library cardholders can check out packets of seeds to plant in a garden, and are asked at the end of the growing season to return some new seeds from those plants back to the library for the next year.

Any seeds exchanged in this manner must be heirloom varieties, rather than hybridized plants. This is because the genetic makeup of heirloom varieties doesn't change from year to year, hence the name. Heirloom plants are often centuries-old varieties that have, over that period, adapted to specific growing climates. They also offer a multitude of colors, shapes, sizes and flavors, like the orange, green, red, striped and yellow varieties of heirloom tomatoes.

Hybrids, meanwhile, are plants crossbred to achieve the best features of two parents, like hardiness and disease resistance. Hybrids don't produce seeds with the same characteristics as both parents. Instead, they revert back to the qualities of one parent, making them undesirable candidates for seed-saving.

After hosting a series of classes with local Master Gardeners to kick off the seed library's first year, Otis Orchards has lent out more than 650 packets of seeds so far. Branch supervisor and seed library organizer Kathy Allen says people have driven from all over the region to check out seeds, all of which were donated by seed companies to give the program a boost.

While the seed library has seen far-reaching interest, Allen expects many borrowers won't return seeds at the end of the year. Some varieties can't be saved as seeds — carrots and cabbage require two seasons before seeds can be harvested, and to do so, the plants must survive the winter. Tomatoes can be tricky to pull seeds from, too.

"It has to be sustainable — if it isn't sustainable and we don't get seeds back, it'll end after this year," Allen says.

Another challenge is making sure seed borrowers properly label and track their plants to avoid mixing up varieties of the same species. To help first-year seed harvesters, the branch plans to host a round of workshops on this process near the end of the growing season. 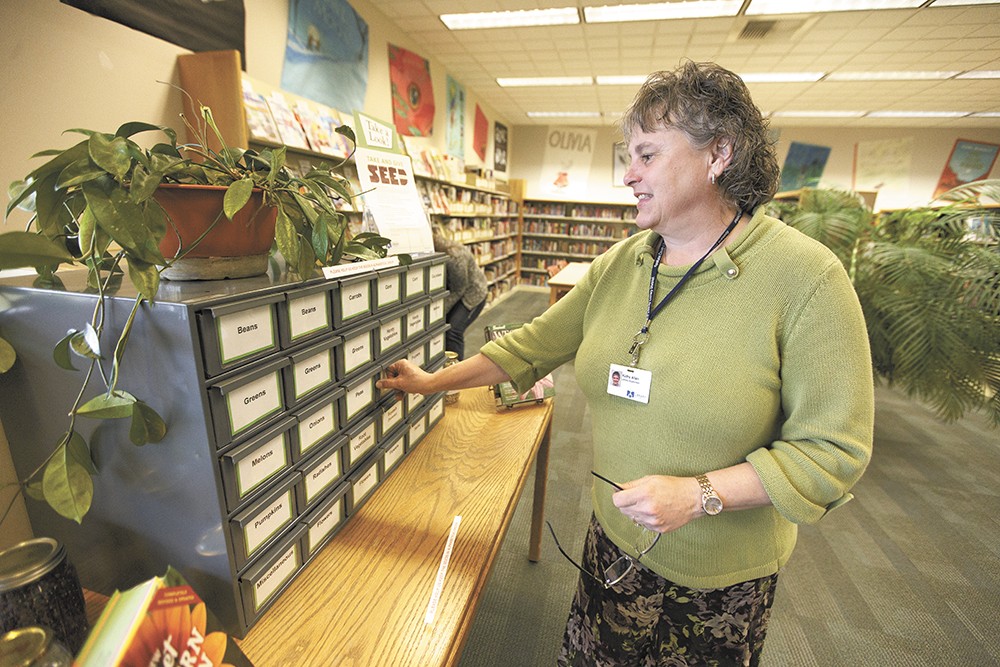 Young Kwak
The Otis Orchards seed library has lent hundred of seed packets since launching in February with the help of supervisor Kathy Allen.

As the trend of backyard farming

continues to spread, paired with an increased consumer focus on eating locally grown foods, seed libraries are quickly becoming the next big agricultural movement. Less than five years ago, a New York Times feature noted the rarity of seed libraries, with only a dozen known seed-saving groups around the country. But since then, the number of seed libraries has ballooned to more than 400, as tracked by the online resource seedlibraries.net.

"Gardening in general is finding its roots again, and people are learning they don't want pesticides and chemicals in their plants, so they're trying to grow more of their own," says Spokane Master Gardener Marilyn Carothers, who taught a few classes during the seed library kickoff. "Because heirlooms can be saved from year to year, it's part of preserving our past. It also gives people a chance to even have access to garden seeds," she adds.

At the library, Allen points to a chart on a poster explaining the purpose of seed saving. The tree-shaped graphic from a 2011 National Geographic feature examining the future of the world's food supply illustrates how drastically heirloom crop varieties declined between 1903 and 1983. In that time, America went from 307 varieties of sweet corn to 12, and from 408 varieties of peas to 25.

"In America, we want the biggest and the best — and that is where the hybrid comes in," Carothers notes. "We want the perfect carrot and apple, and we aren't willing to buy an imperfect fruit. But if you grow it at home, the imperfect carrot and tomato is still going to be flavorful, and the reward is overwhelming. We have an emotional bond with food we grow at home."♦